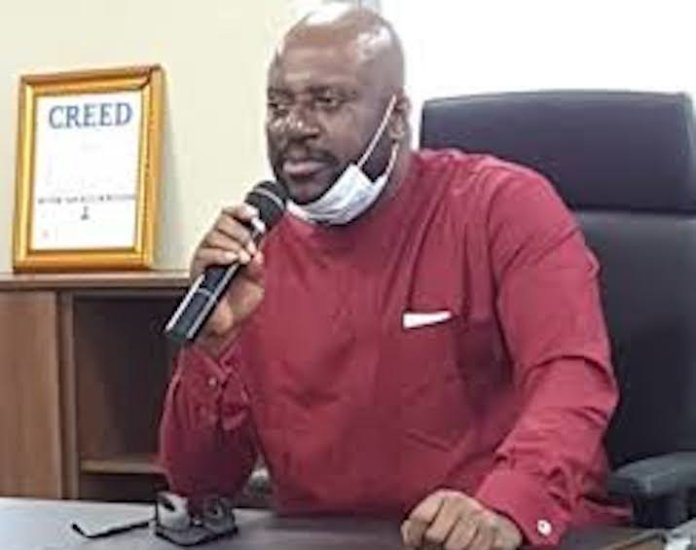 Kemebradikumo Daniel Pondei, Acting Managing Director of the Niger Delta Development Commission admits that the agency wandered away from its objectives in the past, encumbered with opportunistic practices that led to debilitating debts and a bad reputation, but there is a new resolve to return NDDC to its noble goals

The Niger Delta Development Commission(NDDC) was set up by the Act 2000 No. 6 of the Laws of the Federation of Nigeria, which repealed the Oil Mineral Producing Areas Commission Decree 1998. The Act was amended in the year 2017 with no significant addition or effect.

NDDC is an interventionist agency with a clear mandate of its role in bringing development to the Niger Delta Region. Over the years, NDDC became an alternative state government, assuming and performing the duties of local governments and state sovernments. With a musical chair of leaders going in and out (it is on record that no Governing Board of the NDDC has completed its four-year tenure), the agency was bereft of direction even as it was turned into grounds for high stakes political games.

The amount of money that has been spent by the NDDC since inception is not commensurate with what is on ground and falls short of the expectations of the founding fathers and the people of the region.

Indeed, when I was appointed by His Excellency, President Buhari, GCFR on February 19th 2020, to serve as the fifth Chief Executive of the agency within one year of my resumption, the palpable and overwhelming feeling from the citizenry was that of exasperation. The accrued rot in the agency had choked progress and innovation, and the mandate from Mr President was that we should clean house. And cleaning, we have started.

All these were true, but in keeping with the ‘Change’ and ‘Next Level’ mandates of Mr. President, we have since begun to clean house.

As soon as I resumed, I realized that no organization could give what it does not have. Hence, an immediate re-organization of the work force was a task we needed to undertake. We took a decisive decision to reshuffle key team members, and reward competence and capacity. Indeed, today that re-organization is work in progress even as the top hierarchy of the organization are now more responsive to the needs of our communities. Further to this, we began to take a hard look at staff promotions and motivation, to correctly incentivize the team and dissuade them from engagement in unwholesome practice.

Further more, our team took a cold hard look at the existing procurement system. A lot of contractors were being owed, and we swung to pay well over N20 billion of outstanding debts of our N2 trillion outstanding, many of them so aged that hotels and restaurants did not consider NDDC to be credit worthy even in Port Harcourt.

This necessary step ran into natural resistance by forces that were used to business as usual, but thanks to the support of Mr President, we have weathered it. NDDC should never be punished for doing the right thing, and no media propaganda can stop the good works the agency was saddled to implement. The scholarship program we met was poorly managed and creating a lot of bad press for the government, we have begun to clean up the program even as we need to get to the bottom of the ever-rising bill and claims of non-payment despite several disbursements.

In the process of evaluating project completion for payment, our new project management system saved the agency over 2 billion naira. Implemented for basic amount by a crack team from the agency, this digital system has so far being deployed to assist the forensic audit ordered by His Excellency, the President of the Federal Republic and supported by our Honourable Minister, HE Senator Godswill Akpabio, who have both been of immense support to us.

Despite the fact that since February, we have been involved in putting out fires, in the midst of one controversy or the other – some orchestrated, others unreal – we recognized that we still owe it to our people, the people of Nigeria and citizens in Niger Delta in particular, to deliver the dividends of development.

To this end, we have not relented on our core mandates. Projects that were previously left uncompleted are being re-mobilized and contractors are slowly coming back to site, even as we have access to limited resources; as a result of the on-going audit of the agency that seeks to examine actions predating our tenure but certainly necessary for moving forward.

However noble any action may be, devoid of strategic planning, it won’t amount to much. The NDDC has a masterplan, which it does not adhere to. The masterplan we inherited has neither time frame nor key performance indicators to measure effectiveness of its interventions.

As a result, NDDC had concentrated on small pocket projects and avoided doing major infrastructure projects, which would have made more impact on the quality of life and the economy of the region. Many major communities still have no road access, even as pipe borne water in the midst of the region that produces the golden egg remains largely a mirage.

For this reason, upon stabilization of the agency in the past three months, we have begun to develop a new roadmap for the Niger Delta based on the courageous vision of President Buhari and his cabinet Minister. This roadmap shall be predicated on:
• Developing the massive human resource potential of the over 30 million people that call the Niger Delta their home. The focus shall be on job creation through innovation and industrialization, not just training for its own sake.

• Conceptualize and develop bold new infrastructure, as a bulwark of economic linkages for Niger Delta communities.
• Build sustainability into our projects, realizing the ecosystem of the Niger Delta is particularly vulnerable to climate change while opening up new vistas for collaboration and rapid funding of eco-friendly development initiatives around power & water.
• Engage with sister agencies, to leverage resources, achieving more with less while avoiding duplication.

• Collaborate with state and local governments around new towns & cities development; opening up new vista through erosion control, land reclamation and waterways modernization.
• Lastly, rebuilding the reputation of the NDDC as a reliable partner for development; working across various stakeholders to build confidence in a bright future for the people of the Niger Delta region.

The goal of this roadmap is in line with the vision for economic diversification, job creation and rapid industrialization of the President. It will also promote a strong security environment with the community as stakeholders, while reducing corruption in delivery to the bare minimum. All these being cardinal policies of President Buhari, and fully carried along in this new roadmap.

We will be able to achieve our grand goals not only by prudence, but also by being afforded the statutory resources meant for the agency. The oil companies owing over $5 billion, being 3% of their annual spending, need to pay up. We also enjoin Mr President to release over 1.6 trillion naira in accrued earnings from the ecological fund among others, including 15% of FAAC allocations to member states.

We have no doubt that given the roadmap which will be launched in couple of weeks before the year runs out, it is time to give NDDC a chance to prove itself once again under this new leadership. The time to ensure we execute is now, a new Niger Delta is possible again.

However noble any action may be, devoid of strategic planning, it won’t amount to much. The NDDC has a masterplan, which it does not adhere to. The masterplan we inherited has neither time frame nor key performance indicators to measure effectiveness of its interventions. As a result, NDDC had concentrated on small pocket projects and avoided doing major infrastructure projects, which would have made more impact on the quality of life and the economy of the region. Many major communities still have no road access, even as pipe borne water in the midst of the region that produces the golden egg remains largely a mirage