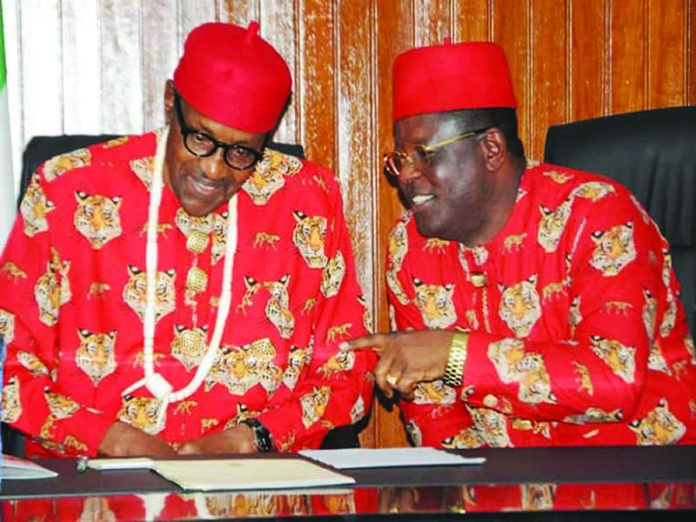 Dust raised by last week’s defection of Governor Dave Umahi of Ebonyi State to the ruling APC is yet to settle, writes Benjamin Nworie

It’s not an interesting moment for the Peoples Democratic Party (PDP), the erstwhile ruling party in Ebonyi State. Apart from the major blow that Governor Dave Umahi has dealt the party, it has become a drama of suspension and counter suspension of members between the National Working Committee and Ebonyi State Working Committee.

The aftermath of the defection of Governor Umahi is further ditching the Party. The governor had noted that his defection would be the end of PDP in the state. It’s not a threat. Therefore, the PDP ought to die. The troubles of PDP started with the defection of the governor to the All Progressives Congress (APC).

Though some PDP stakeholders, who felt that their interests were not guaranteed in APC, were working assiduously to still keep the party but their efforts were often mitigated by internal and external influences. Ebonyi has a trickle down political culture. It’s on rare occasion that few individuals had won elections without overt assistance or expressed directive of the state Executive.

Egwu miraculously returned for a second term. It took the intervention of Governor Umahi for his second term bid to sail through. This was because the agreement, which was allegedly espoused by then Egwu administration fixed single term for senators in the zone. This agreement was maintained by previous Senators but was altered by Egwu in 2019.

This alteration did not go down well with the izzi clan, which occupies three local government areas in the zone as against Egwu’s only one council area. The ex-governor has therefore seen Umahi’s defection as a major disaster to his third term bid, if any.
But whether Egwu likes it or not, the Izzi people are waiting for him and they might tear him into pieces. This has been worsened by the fact that Egwu could not win election in the state without the intervention or influence of the State Executive.

But he could always muscle his way and clinch the ticket especially, now that he’s a major player to rescue the PDP. Despite the fact that Egwu had governed the state for eight years, served as a Minister, aspired for the National Chairmanship of the PDP and the presidency, he has not fully integrated with his people. To many, Egwu is not close to his people.

Senator Michael Nnachi of Ebonyi South also reportedly signed an agreement for a single term. He was picked surreptitiously as a “lesser evil” that will readily surrender his position in 2023. But from all indications, it appears that his “gentility” has been influenced.

Senator Obina Ogba of Ebonyi Central has been a lucky politician. From the minority, he scaled through to the Senate miraculously. But with the APC in charge, the populous Ezza clan in the zone seems to have woken up from their slumber. At their stakeholders meeting convened to show solidarity to Umahi for defecting to APC, the Ezza clan regretted supporting Ogba against Senator Julius Ucha of the APC in 2019, who hails from the clan.
The rest of the federal lawmakers may have seen that their return ticket is going to be a survival of the fittest and have started to fine-tune the struggle. It appears that the new leaders of the PDP in the state have declared total cleansing of Umahi’s men in the party.

First, the National Working Committee of PDP has dissolved the Ward, Local Government, State and South East Executive. PDP’s spokesman, Kola Ologbondiyan said the dissolution was pursuant to relevant section of the Party’s Constitution. But the dissolution didn’t go down well with the SWC led by Barrister Onyekachi Nwebonyi.

Even as the NWC has sworn in the new Caretaker Committee for the State and Zone, the dissolved State Working Committee led by Barrister Nwebonyi noted that his dissolution was illegal, unworkable and ridiculous. He maintained that he was duly elected and no one has the right to nullify his election and that of other executive members in the state.

In a show of force and relevance, Nwebonyi’s SWC rose from a meeting and suspended Senator Egwu and other national Assembly members, including the caretaker committee members constituted by the NWC. They accused them of anti-party activities. But in a twist, the NWC issued counter-directives that the purported suspension should be disregarded.

The rationale for Nwebonyi’s dissolution has been queried though. It’s needless to say that he’s being punished for the governor’s defection. But, Nwebonyi may have contributed to his ordeals. He was the first to issue an ultimatum to the NWC to zone the presidential ticket to the South East or be ready for a cataclysmic failure in the zone.
This disposition may have been seen as an affront or disloyalty to the Party especially, as he might be perceived to be speaking on the dictates of the governor.

The situation is more complicated as the new Caretaker Committee of the State has been warned by Nwebonyi’s SWC to stay off from the magnificent PDP Secretariat. Whether it will lead to fisticuffs or in the Courtroom, the political space is tense with prediction of violence should any of the camps try to coerce the other.

Chief Fred Udeogu is the man in charge of the Caretaker Committee in the state. A respectable party member, but the assignment given to him at this turbulent moment in the state baffles those, who see him as not fit to lead the struggle. The two camps may resort to violence especially, as the dissolved executive may have the sympathy of the state government.