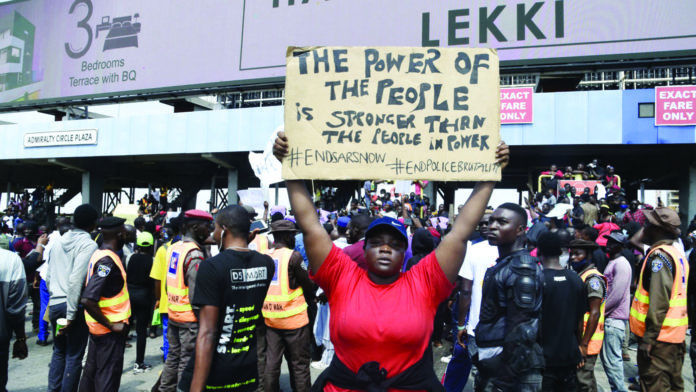 The potency of fake news as a weapon of destruction and destabilisation was laid bare during and after the recent #EndSARS protests in Lagos and other parts of the country, writes Sinmisola Abijo

Bad news travels like wildfire was the hackneyed saying of the past. These days, bad or fake news spreads across the globe in nanoseconds. It is one of the flipsides of the gains of social media. And no one – high or low – is immune from its fallibilities.

As one of Nigeria’s more pre-eminent artistes with over 12million followers on Instagram, a little bit of circumspection would have been expected from the Afro-centric songstress, Yemi Alade. She, however, lent her fame and artistry to the wiles of fake news during the protests by Nigerian youths calling for the abrogation of the Special Anti-Robbery Squad unit of the Nigeria Police Force.

The protests rocked Nigeria for about two weeks and climaxed October 20 with the Nigerian Army storming the Lekki Tollgate to disperse the protesters that had refused to obey the Lagos State government-imposed curfew. That night, gunshots had reverberated around the Lekki area as the protesters refused to vacate the tollgate, which had played host to them all along.

Earlier in the day, as the protest snowballed into violent attacks across the state with policemen being targeted and police stations razed, the state government declared a curfew. Some of the leading voices and faces of the protest obeyed the curfew.

Others wore their exuberant defiance with aplomb and stayed put, singing the national anthem and waving the green-white-green flag with gusto. But the Army had a job to do – one of its major functions being to restore order if needed and in cases of insurrection, which the protest had gradually evolved into.

To scare and disperse the crowd, the Army shot into the air and then, there was pandemonium as social media became agog with different kinds of news and images. Alade, who was ensconced in the comfort of her home, then, posted the picture of a man bearing a young lady wrapped in a Nigerian flag with bloodstains, claiming that she was killed at the protest ground.

The flurry of reposts, comments and likes that the image gathered was unprecedented but not totally unanticipated. It was almighty Yemi Alade by the way. Emotions had reached a boiling point at that time. Fortunately, not long after, it emerged that the picture did not emanate from Lekki. Rather, it was from a drama staged by the Akwa Ibom State chapter of the Nigeria Christian Corpers Fellowship (NCCF) in commemoration of Nigeria’s 60th independence anniversary.

In a statement, the NCCF dismissed the claim that the lady in the photo had died, stating, “This is to inform the general public that the picture trending online of a man carrying a lady covered in Nigerian flag appearing dead is a picture from the NCCF Akwa Ibom State stage drama night tagged: ‘Lord, heal our land’ on October 1, 2020, at the NCCF state secretariat. The lady in question is alive.”

Alade deleted the picture but the damage had been done already. All over social media – Facebook, WhatsApp, Twitter and Instagram – tales of mindless killings rend the air.
The morning after, and with gloom still very palpable and pervasive, radio personality, IK Osakioduwa, posted the picture of a protester named Lucia, whose death, according to him, was not a result of the shooting at the tollgate against social media outcry.

Before the post, social media had mourned Lucia extensively while heaping invectives on her alleged killers – the Nigerian Army. The Army maintains that it only fired blank bullets into the air and that those conversant with guns can testify to the fatality that can ensue if they fired into the crowd.

Enthusiastic social media users are not the only ones guilty of spreading fake news about the protest, institutions like the Amnesty International and global news outlet, CNN, are equally culpable of literally setting Lagos nay Nigeria aflame by pandering to falsehood.
Amnesty International, which claimed to have been monitoring developments across Nigeria since the #EndSARS protest began on October 8, claimed that, “At least, 56 people had died across the country since the protest began, with about 38 killed on Tuesday, October 20, alone.”

However, despite running riot with this claim, the global human rights body has not produced evidence of one dead person apart from the two that Governor Sanwo-Olu confirmed died at the Reddington Hospital due to blunt force trauma to the head. Neither has CNN produced evidence of scores of dead people despite flip-flopping on its presumed casualty figures before settling for Amnesty’s 38. Without a scintilla of doubt, fake news aided the escalation of the otherwise peaceful but overly prolonged protest, which eventually turned violent. It became a potent weapon in the hands of the proponents and enablers, who were unremitting in spinning it to continue incensing the protesters.

On the altar of fake news, sentiments were whipped up across the world, which kept the hashtag trending for several days. Every government personality became a pawn in keeping the embers of hatred and discord aglow.

Special Adviser on Media and Publicity to President Muhammadu Buhari, Mr Femi Adesina, was also at the receiving end of the scourge of fake news as he was alleged to have prevailed on the President not to scrap the F-SARS.

The venom and vitriol that trailed this untruth on the otherwise self-effacing Adesina and his family were preternatural. He quickly issued a rebuttal, saying the website that published the news claimed that he (Adesina) hinged his argument on the fact that ‘the administration should not surrender to Twitter warriors.’

“While the FSARS saga lasted, I did not say a word on it, whether publicly or privately. Why? It was not within my brief. It rested squarely with the Nigeria Police Force, which has its spokesman. For the online publication to have cooked outright falsehood against me shows the riot that is going on in that space in the name of journalism.

“The brain behind the blog had always twisted stories against me and his former employers would testify that I had officially reported him about twice, till I then declined to grant him interviews again. The publication should please be treated as what it is: lie from the pit of hell. A concoction, falsehood from a diseased mind, bent on causing disaffection against other people.”

One wonders what fate would have befallen the presidential spokesman if he had accidentally run into protesters at the time.
Freedom of the press is one of the fundamental components of democracy but the incidence of fake news threatens that freedom across the world and it constitutes a potential threat to democracy and national unity.

Its speedy and systemic rise is making it harder for people to see and sieve the truth in the media ecosystem. Fake news, sadly, contributed largely to the Lekki shooting and spurious lies that trailed it. Lagos has not recovered. It will take years to fully recover but the memories will linger.

Governor Babajide Sanwo-Olu admitted that fake news caused the chaos in the state and led to several state and private facilities being set on fire following the Lekki shooting.
“Many police stations were also burnt by hoodlums and several attacks recorded in different parts of the state causing the death of many. Lagos will be stronger. We will rebuild bridges and we will deliver on the good work we started on ending police brutality and providing justice.

“We are working to stabilise things across the state as we look to rebuild. The state team is working with the hospitals and emergency services to verify the details of everyone involved in incidents across the state,” he said.
––Abijo lives in Lagos.