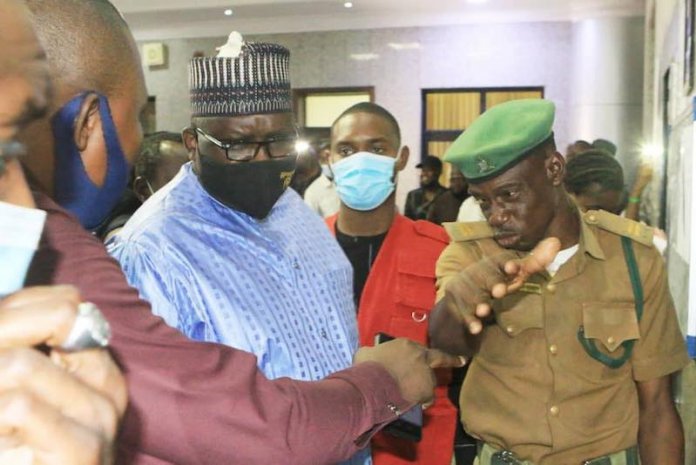 Barely 24 hours after he was brought back to the country, former Chairman of the defunct Pension Reform Taskforce Team, Abulrasheed Maina, yesterday appeared in court to continue his trial in alleged N2 billion money laundering.

He would however remain in prison custody till the end of his trial.

Maina and a company linked to him were last year arraigned on a 12-count criminal charge bordering on alleged money laundering to the tune of N2 billion.

He however pleaded not guilty to the charges and was admitted to bail in the sum of N500 million and a surety in like sum, who must be a serving Senator in the Federal Republic of Nigeria.

Following the guaranteeing of his bail mid-year by Senator Ali Ndume, the former pension boss however stopped appearing in court for his trial sometimes in September, prompting the court to revoke his bail and ordered for his arrest.

Earlier in the week, Maina was reported to have been arrested in neighbouring Niger Republic and was extradited to Nigeria on Thursday.

Although the court had earlier ordered the continuation of his trial in his absence and hearing was to continue yesterday without him, however, Maina was produced in court to continue his trial.

However, when the matter was called, prosecuting counsel, Mr. Mohammed Abubakar, urged the court to order the remand of Maina in custody pending the determination of the case following his jumping of his bail.

Abubakar also said that he was ready to proceed with trial as earlier directed by the court.

In a short ruling, trial judge, Justice Okon Abang, granted the prayers of the Prosecution and ordered Maina’s remand at the Kuje Correctional Center pending the determination of his case.

“The defendant is already on bench warrant having jumped bail.

“So he shall be remanded in correctional centre pending the conclusion of the trial”, the judge held.

“I am inclined to accommodate the 1st defendant for the sake of fair hearing and justice. It is safer and neater to have an adjournment to allow the 1st defendant brief his new counsel. It is said that a defendant is not guilty until he is found to be guilty by the court”, he held.

Earlier, the Chambers of J. K. Gadazama (SAN),was granted leave to withdraw as counsel to Maina.

The Chambers had sought leave of the court to disengage as counsel to the defendant.

A lawyer in the team, Francis Oronsaye, based the decision to withdraw from the matter on Maina’s conduct, which he said brought embarrassment to the Chambers.