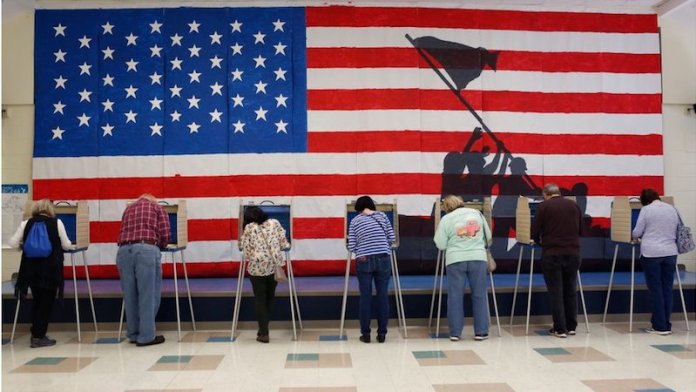 The US is a great country without a doubt. The political parties in the United States have clear cut principles with the electorate pursuing these principles in their bid to install a candidate as president.

The Republican Party believes in big business, a winner take-all-in business, and does not believe in unnecessary charitable acts to the poor, the Libertarians and the Evangelicals are the two important wings of the Republican Party. These wings determine the party standard bearer leading to a presidential election.

The Democratic Party has two blocs, right wing and left wing. The right wing is a conservative group and the left wing is the progressive group of the party. Both wings of the parties have to agree on a consensus candidate, or else a presidential candidate forced on the party may lose an election. The Evangelicals of the Republican Party were responsible for the emergence of the Bushes (senior and junior) and Donald Trump as presidents of the United States. Small wonder, many say that the Republican Party is a Christian Party.

Public opinion had it that Mitt Romney (Republican) lost the presidential election against Barack Obama (Democrat) because he subscribes to the Mormon religious conviction and the evangelicals of the Republican Party refused to come out in large numbers to vote for him. Mormon, they conjectured is a cult, far removed from Christian values.

Ross Perot got 19% of the popular vote, even as an independent candidate and as a politician with conservative views. He spilt the votes of the Republican Party, this was the chief reason Bill Clinton (Democrat) defeated George Bush (Republican) in the 1992 presidential elections.

Retired Generals such as Collin Powell (Republican), George Bush (Republican) and many other veterans and mainstream cabal openly endorsed Joe Biden (Democrat) to become president of the United States; many of these are members of the Republican Party and not Democrats.

World leaders now, expressly after the Second World War do not tolerate people who are threats to the New World Order causing needless bedlam.

Some of the persons and country after the Second World War seen as threats to the New World Order are Soviet Union, Slobodan Milosevic, Ayatollah Khomeini, Saddam Hussein, Osama Bin Laden and Donald Trump. All of the above-named persons and country were dealt with by the world establishments.

Minority people in America traditionally vote the Democratic Party. They believe that the party promotes the many interests of minorities more than the Republican Party.

Jews in America support the Democratic Party but Jews in Israel support the Republican Party, the latter on issues of settlement.

Liberals in the United States are quick to settle account with the Republican Party. They say the Republican Party is a racist party. It is hypocritical for anyone to think human beings can legislate against racism. It is a mixed bag. There are blacks who are racially prejudiced; many whites believe in white supremacy movement and are racially bigoted, some Arabs even in our time are as highly bigoted to the type of Hitler’s Aryan Policy. Same with some Asians and Jews and so it is not about the Republican Party. Some liberals just like Donald Trump believe Africa is a shit hole.

There are many decent members of the GOP. To say that the GOP is a racist party is out of sync.

It is the reason Donald Trump lost the election on ideological grounds. Some accuse him for being a racist. I do not think he is a racist. He is a maverick who does not like being politically correct even though he should because he is an outsider and not an establishment player.

Donald Trump got over 70 million vote and so what about it? .Ideology drives people to vote in the United States.