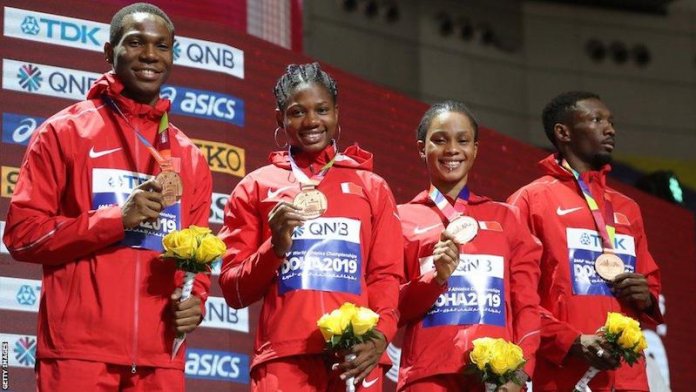 Bahraini athlete Abbas Abubakar Abbas was just 16 years old when he was scouted to swap allegiances from Nigeria, the country of his birth.

Now he is one of four Nigeria-born sprinters recruited on unique security force salary schemes who are targeting 4x400m mixed relay gold for Bahrain at next year’s postponed Olympics.

The 24-year-old, who won bronze at last year’s World Athletics Championships in the mixed relay event, has no regrets about his swap.

“In Nigeria we have many talents but we don’t know how to handle them,” he told BBC Sport Africa

“Of all the athletes I used to run with, I only know one in Nigeria who is still in the sport (Orukpe Erayokan). The difference in Bahrain is the support.”

Erayokan was in demand himself in 2012 when he had just beaten Abbas at Nigeria’s National Sports Festival.

“The official for Bahrain came to my coach, but I didn’t have a phone at the time, so I didn’t know anything about it until a year later,” says Nigeria’s former national 400m champion.

“Sometimes I cry, because I know – I wish – I would have followed. In Nigeria, I often struggled to pay for the restroom after training.”

He is now attempting to keep his career on track in the UK after competing for Nigeria at the Rio Olympics,

Unlike Erayokan the young Abbas and his family talked to the officials from Bahrain after competing at the festival which is Nigeria’s premier athletics meet.

Abbas’s father was persuaded that a prodigious talent like his son’s would be wasted in West Africa as he was given a brand new pair of running spikes and told about the kind of life awaiting for him in Bahrain.

“My father asked, ‘what about his career after sport?’ They [the representatives] said ‘Don’t worry, he will never regret it. When you finish running you can say, ‘I’m ready to go to the army’,” Abbas told BBC Sport Africa.

“Most of the athletes from other countries here have two salaries. You have a choice: some are army; some are police. Most athletes are youths when they come to Bahrain.

“If you are running good you can make a lot of money from the federation. Even if you don’t, the money will be enough to take care of you, your family, even some people you know.”

Abbas insists he ‘always wanted to be a soldier’ and the money he has earned since moving to Bahrain has enabled his father to quit his job working for an electricity company.

He admitted that he was not fully prepared to move to the middle east as a teenager and say goodbye to his father, who had escorted him out to the tiny island from Kano State.

On arrival he moved in with his new coach, a fellow Nigerian but a man he had never worked with previously.

“Before I lived there, I used to think Bahrain was somewhere in Russia. I missed my mum. I cried every day but I got used to it after a year,” he admitted.

“My coach used to tell me, ‘don’t worry, I’m your father’, and he bought me things.”

When he turned 18 Abbas was sponsored to move into his own apartment in an athletes’ complex in the city of Riffa.

There was further success for Abbas and his adopted nation when he won individual 400 metres gold at the World Military Games, held in the Chinese city of Wuhan just prior to the Coronavirus outbreak.

Abbas has been unable to compete for prize money in 2020 due to travel restrictions caused by the pandemic, leaving him grateful for the ‘top-up’ salary provided by the Bahrain Defence Force.