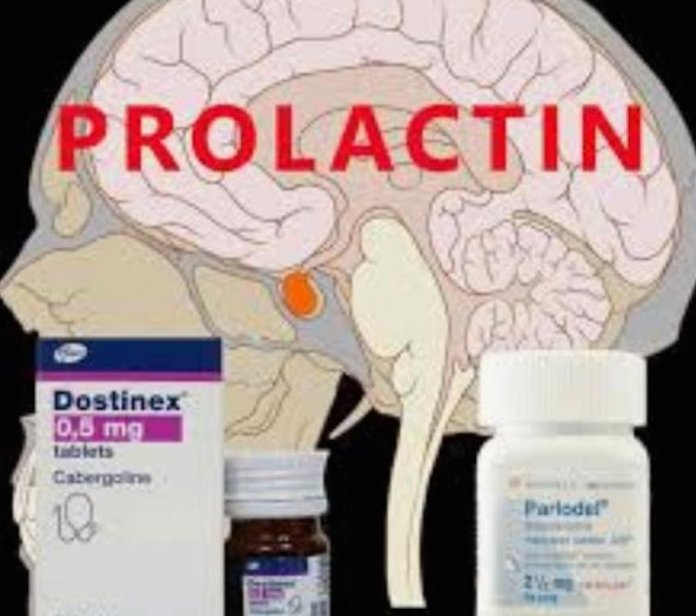 EFFECT OF HYPERPROLACTINEMIA ON FERTILITY IN WOMEN

Increased levels of prolactin in women can suppress the secretion of gonadotrophin-releasing hormone (GnRH). This will in turn affect the release of the luteinizing hormone (LH) and Follicle Stimulating Hormone (FSH), thus inhibiting ovulation. Both of these hormones are necessary for the development and maturation of eggs within the ovaries before they can then be released during ovulation and available for fertilization. Ovulation which is the release of an egg from the ovary, is an essential phase of the menstrual cycle. If an egg is not released, fertilization cannot take place, thereby making getting pregnant impossible. Women with the mildest cases of high prolactin levels may ovulate regularly but may not produce enough of the hormone progesterone after ovulation. This is known as a luteal phase defect. Deficiency in the amount of progesterone produced after ovulation may result in a uterine lining that is less able to have an embryo implant. Some women with this problem may see their period come a short time after ovulation. Hyperprolactinemia can also interfere with the normal production of other reproductive hormones, such as estrogen and progesterone. It can stop the ovaries from producing the normal level of estrogen required by the body for regular ovulation and periods. Low estrogen levels in turn can also cause vaginal dryness and low libido.

EFFECT OF HYPERPROLACTINEMIA ON FERTILITY IN MEN

High prolactin levels may affect the production of testosterone which is the major sex hormone in men that regulates fertility. Too little or absence of it may affect normal sperm production in the body, thus leading to infertility. Hyperprolactinemia is not as common in men as it is in women. However, men suffering from abnormal prolactin levels may encounter male factor infertility. The issues they may face include poor sperm count, erectile dysfunction, and poor libido. Therefore, diagnostic tests for hyperprolactinemia are to be included in the checklist for male infertility treatment too. In addition to affecting sex characteristics, high levels of prolactin in men can lead to other problems related to the lack of testosterone. Fatigue, which is a common effect of low testosterone, also loss of muscle mass and strength. If left untreated, high levels of prolactin can lead to loss of bone density, which greatly increases the chance of breaking or fracturing a bone.

Eighty-five percent of women taking these medications ovulate, and of those who ovulate, 70 to 80 percent get are likely to be pregnant. The doses must be determined and adjusted appropriately as prescribed by the physician.

• Synthetic thyroid hormone: Recommended doses can return the prolactin levels to normal if the underlying cause is hypothyroidism.

• Surgery: In cases where it has become impossible for medication or hormones to treat the tumor,the managing clinician may recommend surgery. When this cause of hyperprolactinemia is being treated, it is imperative for the specialist to first figure out a patient’s pregnancy status and pregnancy intentions. This is because some of the medications that are used for the treatment of such tumors may negatively affect pregnancy or a developing fetus.

• Radiation Therapy: In cases where the tumor cannot be controlled with medication or surgery, radiation therapy is used although this is rare. Radiotherapy can be given in one of the following ways; Conventional external-beam radiation therapy or Stereotactic radiation therapy which involves the photon beam, gamma knife, linear accelerator, or proton beam.

• Diet: In addition to taking medications, diet is also important in lowering prolactin levels in the blood. Foods high in zinc such as shellfish, beef, turkey and beans may help to lower prolactin levels. Also, consume foods rich in vitamin B6 which contains prolactin inhibitors. Examples are potatoes, bananas, wild salmon, chicken and spinach.

• Relaxation Techniques: Such as breathing exercises, massage, music or art therapy, can have a major positive effect in lowering prolactin levels for stress induced hyperprolactinemia.

Most women should not have trouble conceiving once their prolactin levels normalize, as most prolactinomas respond very well to medication. These medications are usually stopped during the course of pregnancy. Hyperprolactinemia may hinder pregnancy if untreated, but it does not permanently cause infertility in both men and women. Once the underlying cause of the high prolactin levels in the blood is diagnosed and effectively treated, the chances of conceiving would greatly improve.
References: yourhormones,YOUR IVF JOURNEY.COM,IVF 1