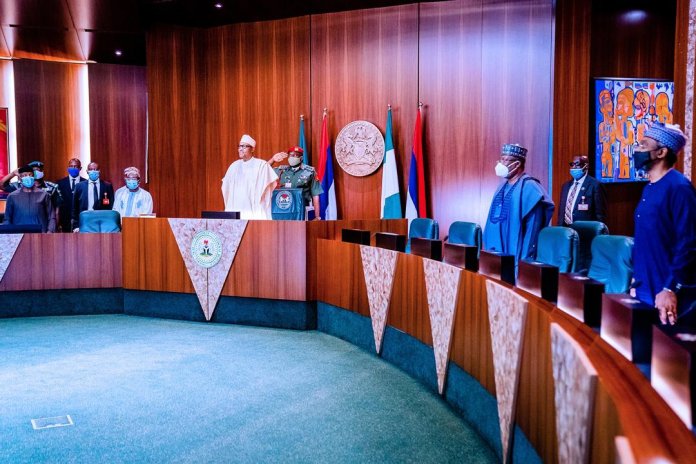 The Federal Executive Council (FEC) yesterday approved N120,717,387,596 for the execution of various projects in different parts of the country.

Of the total amount, about N117.5 billion was approved for the reconstruction of roads and bridges in different parts of the country.

Briefing reporters at the end of the 26th virtual FEC meeting, presided over by President Muhamadu Buhari in the Presidential Villa, Abuja, the Minister of Works and Housing, Mr. Babatunde Fasola, said he presented three memoranda to the council for the approval of N117,485,081,325.

According to him, two memoranda contained approval requests for rehabilitation of various roads and bridges while the third memorandum was for the procurement of application software for Federal Mortgage Bank of Nigeria (FMBN) transactions.

Giving a breakdown of the approvals, Fashola said: “Council approved a total sum of N18,923,846,198.47 billion for roads and bridges. First is the rehabilitation of 26 kilometres of Kano – Kazaure – Daura – Mai’adua Road in Kano-Jigawa-Katsina States at N8.767 billion, Omor – Umulokpa Road in Anambra and Enugu at N1.712 billion.

“Unlike other banks, Federal Mortgage Bank is still unable to send automated notices, statements and all of those to national housing fund contributors. “This application will now enable the federal mortgage bank to provide those kinds of services and do a lot of automation and reconciliation loan and credit processing when fully installed.”

In his own briefing, the Minister of Interior, Rauf Aregbesola, said his ministry presented two memoranda to FEC, seeking the approval of the council for N2,100,080,759.65 to

He said: “Council also approved contract for the furnishing of the technology building, that is the data and communication command and control centre. It will also serve as the service headquarters of the Nigeria Immigration Service. The award is in favour of Messers Julius Berger Nigeria Plc at the total sum approved is N2,100,080,759.65 billion.

“While the final phase of consultancy was given to Messers APTECH Practice Ltd, an architectural design consultants. The ward is a total sum of N163,956,232.03. The duration of the project is four months.”
Also briefing, the Minister of Water Resources, Suleiman Adamu, said the council also approved N200,192,200 for some irrigation projects along the banks of River Niger.

He said the duration would be 36 months, including 12 months of liability.
“It was 24 months plus 12 months extension plus 12 months liability period, making it 36 for a total sum of N200,192,200 million inclusive 7.5 percent VAT. These are high priority projects along the banks of River Niger and have the potential to improve production in the country especially rice production,” he added.

Suleiman also said the council approved the award of contract for a dedicated power line for middle Oke-Ogun irrigation project phase one in Iseyin, Oyo State.

Adamu explained that the irrigation system used to be powered by diesel generators “but because of deregulation and with diesel it has become so expensive and not sustainable.

“So, we have to look for other ways and means to power irrigation systems. We are looking at both national grid and solar. In this case, we have an interim arrangement to extend power from national grid power to irrigation scheme and in the future before it is finished, we will take it to solar.

“The capacity coverage is about 3,000 hectares and right now about 1,300 hectares have been finished but because of lack of power we cannot irrigate the land. Also the land is only being used for rare…irrigation.”

In their own briefing, the Minister of Special Duties, Senator George Akume and Minister of State for Science and Technology, Mohammed Abdullahi, reported the outcomes of their visits to their home states of Benue and Nasarawa respectively in compliance with a presidential directive asking all ministers to interface with stakeholders in their states following the outbreak of #EndSARS protests in October.

Both ministers who told reporters that there was no single act of vandalism in the two states during the protests, adding that they equally secured the cooperation of stakeholders during the engagements.