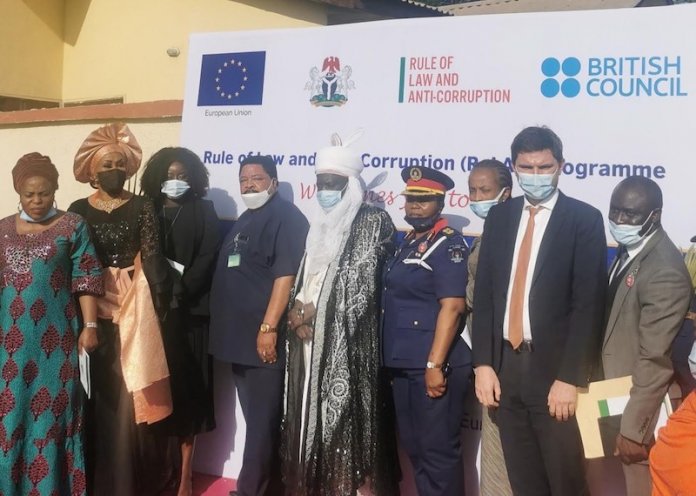 Over 15, 800 victims of sexual assaults have been assisted through the 29 Sexual Assault Referral Centres (SARCs) established by the Rule of Law and Anti-Corruption (RoLAC) Programme of the British Council across 17 states of Nigeria.

This is just as the Minister of state For FCT, Dr. Ramatu Tijjani-Aliyu, disclosed that many cases of sexual assault in Nigeria are under reported as survivors are often times reluctant to report, for fear of victim blaming and social stigma.

Aliyu made this known at the launch of Awyetu Sexual Assault Referral Center (SARC) in Bwari, Abuja, as part of the programmes set to commemorate the 2020 ‘I6 Days of Activism to End Violence against Women and Girls’, organised by the British Council under its European Union (EU) funded programmes; RoLAC and the Managing Conflict in Nigeria (MCN).

She said “even when cases are reported most times they are poorly prosecuted due to lack of evidence to prove rape more so there are limited facilities to assist victims with necessary medical assistant, trauma counselling etc.

“The medical personnel assigned to this SARC has been trained in forensic medical examination and documentation, and to also provide medical report to police to support the prosecution of rape cases in court.”

Also, Ambassador Clement Botillier, Head of section, Democracy, Governance and Migration section, EU Delegation to Nigeria and ECOWAS stated that sexual crime is widely acknowledged as the most serious crime affecting women and girls in Nigeria, adding that the pandemic created a surge showing a significant increase in sexual gender based violence.

“The fight against gender based violence remain one of the priorities of the European Union because we believe this is a thread and that there are challenges that affect so many people in the world.

“SGBV is creating underdevelopment, negatively affects cohesion, the ability to contribute to society and ultimately prevent society from thriving, because of this the EU have committed significant resources in the fight through technical and financial support to front line defenders,” he said.

According to Plang “Between July 2019 and September 2020,SARCs have assisted over 15,800 victims of sexual assault combined, over 70 per cent of whom are under the age of 18.

“The success of the SARC initiative have demonstrated the critical role it plays as a hub of network of collaboration among the many institutions and responders that are active in the effort to reduce sexual violence and assist victims.”

With this development, she said many strategies have been put in place to help curb the increase of sexual assault.

She stated that “we are engaging constantly with the police on the need to promptly address issues if rape and GBV, also the governor’s forum declared a state of emergency on rape as a follow-up the wives of the governors with support from the wife of the President, Aisha Buhari, in a bid to address the hydra-headed monster.

“The ministry has also launched the national data situation room and data dashboard for ending violence against women and girls in Nigeria.”

In the same vein the Director General NAPTIP Julie Okah Donli reiterated the importance of SARC as it goes along way in the fight against GBV, stating that the agency will not relent in the fight to bring justice to survivors, emphasising the commitment on fighting the menace headlong.