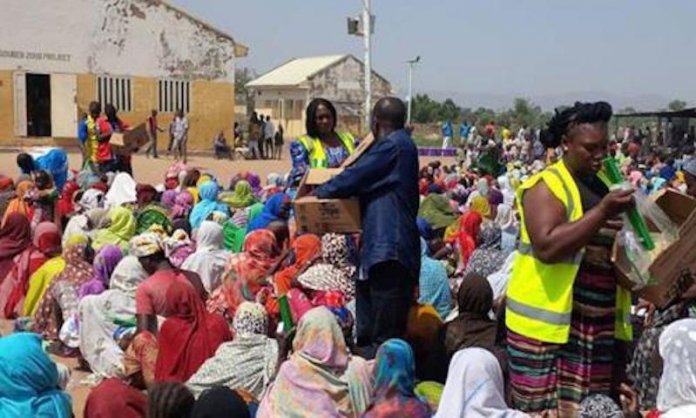 The Mallpai Foundation has trained internally displaced persons (IDPs) at the New Kuchingoro camp in Abuja on how to repair phones, make soap and also donated relief materials to them.

The founder of the foundation, Mrs Aisha Bagudu disclosed this at a session with journalists in Abuja yesterday, saying it was part of an effort aimed at empowering them and making them financially independent.

She said there was no doubt the country faced a lot of challenges and that the government alone could not solve all the problems, hence the need for individuals and non-governmental organisations (NGOs) to join hands with the government.

Bagudu, also the First Lady of Kebbi State stated: “If you can notice that in this country now, we have a lot of problems whether we say it or not. I’m talking as a founder of an NGO, as a human being, as a mother as well.

“We have a lot of challenges that we are facing in this country, so we decided to do something to help the youth and the women as well. We want to train them, not the usual outreach that we give them and go away.

“What can we do to impact their lives? We should train them, let them have skills, something different from the usual outreach. That is why we are training them now, after that we will empower them.”

Asked what the government can do to secure the citizens and alleviate poverty, Bagudu said: “The problem we are having is that we always base everything on the government. Governments alone cannot do everything, NGOs and individuals should join hands and let’s empower each other.

“We can’t say we will rely on getting a job 100 per cent. I don’t believe in getting a blue-collar job alone. But I believe in having skills that we can use and also sell the skills and also train others,” she said.

She noted that before oil, Nigeria was known for agriculture, adding that the country must go back to agriculture to grow the economy.

Also, the Director of Communication of the foundation, Mr. McEva Temofe, said a research was conducted by the foundation to ascertain where intervention should be made, considering what happened to a lot of families during the lockdown which put them off balance.

According to him, we identify these people abandoned by the system to give back to them, train them on ICT, how to repair phones, how to make soap and also give them relief materials, so that they could also give back and help in making income for themselves.

Timofe added that the foundation also set up a health team to check people’s high blood pressure, conduct HIV and other tests.

On his part, the Vice Chairman of Kunchingoro IDPs, Mr. Usman Adamu, commended the government, NGO and individuals for their intervention for the past seven years they have been in the camp.

He lamented: “We have been given notice by land owners to leave by January. In January now we don’t know where we are going. We want the government to help us in that area.”