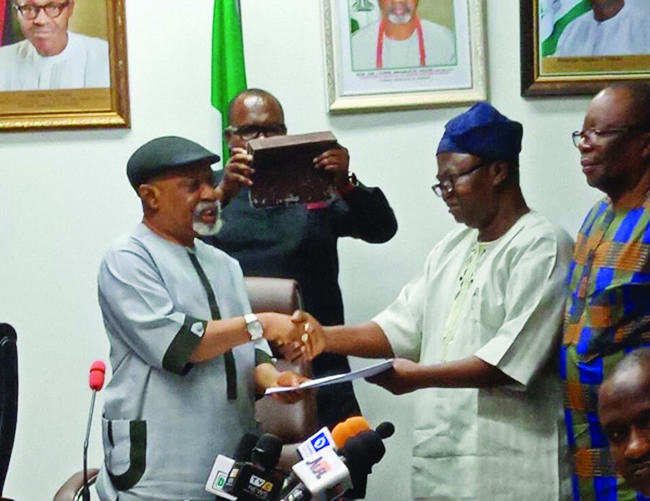 There’s a striking difference between the leaderships of ASUU and NLC as exemplified in their recent agitations, writes Amby Uneze

In Nigeria of today, struggle for relevance becomes the key word to surviving the harsh economic realities in the country. It is no longer news that everybody fights for himself. The dependence on organised bodies to act as activists or mouthpieces for people, who are aggrieved over certain unpopular policies of government(s) most times turn out to be a sham.

No wonder, the Nigeria Labour Congress (NLC) is dancing in the sun just for the sake of seeking relevance while in the actual sense of it, the body is impotent. However, an organisation like the Academic Staff Union of Universities (ASUU), which acts as the main catalyst between universities lecturers and the government needs to be commended for standing to be counted.

ASUU, no doubt has her own shortcomings but generally, her potency to galvanise all the grievances of Nigerian University lecturers into a demand to achieve academic excellence in the country is highly appreciated. That is what a union that loves her members and country should do at any given time.

On the other hand, an organised body that should fight for all Nigerians irrespective of which union one belongs individually is the Nigeria Labour Congress (NLC). NLC is the mother of all unions in Nigeria, and her main mandate is to protect the rights of every worker in the country.

Unfortunately, NLC has of late become a toothless bulldog and cannot defend the people it claims to represent. Nigerian workers are, however, at the mercy of the government that tosses them like a coin.

The fundamental aims and objectives of the Congress are to protect, defend, and promote the rights, wellbeing and the interests of all workers, pensioners, the trade unions and the working class in general; and also to promote and defend a Nigerian nation that would be just, democratic, transparent and prosperous through the attainment of its objectives.

However, the NLC has failed the people of this country in so many ways. Looking at the intervention of the NLC these past few months, especially as the petrol pump price increases every month to the chagrin of Nigerians, one had expected the NLC to live up to her mandate by protecting Nigerians from the shylock of the federal government.

How can one explain that fuel sold for N87 per litre in 2015 before President Muhammadu Buhari has in five years rise to N170 per litre? Is Nigeria no longer one of then five major exporters of crude oil in the world and still, her citizens pay heavily, even more than those countries they export to? What kind of economic calculation is that, and then the government is also talking about another recession?

The Organised Labour recently convened a meeting with the federal government aimed at addressing the increase in price of fuel and electricity tariff. But what happened? They staged a walkout and never put pressure on the government to rescind her decision on fuel increase. The meeting, they claimed, was necessitated by the recent increase in pump price of Premium Motor Spirit (PMS), otherwise called petrol, from N160 per litre to N170 and the increase in electricity tariff.

The federal government had been giving excuses to soothe themselves without taking Nigerians into consideration. It linked the recent increase in the pump price of petrol to the success of Pfizer’s Covid-19 vaccine. Imagine that!

The federal government said the recent increase in the pump price of Premium Motor Spirit (PMS) otherwise known as petrol, was due to the announcement of a positive outcome in the final stage trial of the coronavirus vaccine being developed by American pharmaceutical giant, Pfizer Inc in collaboration with BioNTech.

The explanation followed the public outcry and criticisms that greeted the petrol price increase. This disclosure made by the Minister of State for Petroleum Resources, Chief Timipre Sylva during an interaction with State House correspondents on Monday, November 16, 2020, after a routine meeting with President Muhammadu Buhari at Aso Villa, Abuja was indeed a reckless one, considering the fact that Nigerians did not get the Covid-19 palliative meant for them by CACOVID, talk-less of vaccine.

Sylva pointed out that the announcement by Pfizer, that its COVID-19 vaccine was over 90% effective, triggered a slight increase in the price of crude oil in the global market. “What happened recently was because of the announcement of a vaccine for COVID-19 by Pfizer. With that, crude oil prices went up a little bit.

Sylva, who pointed out that it was not the first time the federal government would be giving this explanation whenever there is a movement in petrol price, contended that the pump prices of petrol was directly determined by the price of crude oil in the global market.

But, what is the NLC doing to protect Nigerians from these regular increases in the pump price of fuel? Generally, when there is a slight increase in fuel, every segment of the economy is affected and those who usually bear the brunt are the poor Nigerians that NLC is supposed to protect. But they appear to have sold out.

For ASUU, its leadership has remained resolute, astute and dogged in fighting for what they feel were the rights of the university lecturers in the country. They had several meetings with Minister of Labour and Employment, Senator Chris Ngige, and finally it does appear that there is light at the end of the tunnel.

Last week the Minister expressed optimism that members of the Academic Staff Union of Universities would accept the new offer by the federal government and end the eight-month strike, which began in March. And that’s exactly what’s happened. With N70 billion conceded to ASUU and exempted from IPPIS, the union has called off strike and life goes on with the university lecturers.

While ASUU and the federal government deserve commendation for resolving the over eight months impasse, the NLC needs to buckle up and constantly bear Nigerians in mind as the reason they are there in the first place. NLC should wake up from its slumber.