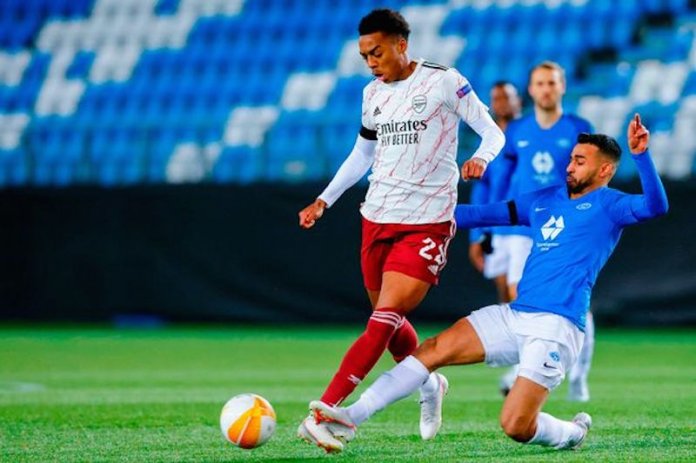 After an initial contract hitch which suggested that American-born Nigeria striker, Folarin Balogun’s time at Arsenal may be coming to an end, things have however taken a new twist as Arsenal Manager, Mikel Arteta, is now keen on extending Balogun’s contract, stressing that the Hale End Academy product has the Gunners’ DNA. Balogun indeed repaid the trust reposed on him as he came in as a second half substitute to score in Arsenal Europa League game against Molde on Thursday

English Premier League side Arsenal have reopened contract talks with American-born striker of Nigerian descent Folarin Balogun.
The Athletic UK reported that Balogun remaining at the Emirates Stadium beyond the end of the 2020-2021 season was back on the agenda with first team manager Mikel Arteta keen on the England U-20 international extending his contract which expires in the next seven months.

The Hale End Academy product was earlier frozen out of the club’s first team reckoning after breakdown in contract talks but things have changed in recent weeks with the 19-year-old coming off the bench to make his professional debut in last month’s Europa League fixture against Dundalk.

In addition, he has been handed the captain’s armband in Arsenal’s last five games in the Premier League 2. There was talk of a possible departure for Balogun in the summer transfer window but the Gunners turned down an offer from Sheffield United just as they did to Brentford in the winter transfer market.
Arteta told Football.London Balogun has worked to change his mind about a new contract.

Balogun starred last season with 10 goals and four assists in 15 Premier League 2 games, and fans have real hopes that he can become a first-team star.
However, Arsenal failed to agree a new contract with Balogun over the summer. Sheffield United failed with a £3 million bid with Arsenal valuing him at around £15 million – despite him being in the final year of his deal.

Balogun featured from the bench against Dundalk last month, and featured as a second half substitute against Molde on Thursday night having made the trip to Norway.
This has left Arsenal fans hoping for a new contract being in the works, and Arteta has now commented on the youngster’s future.

“Yes, he is a player that I want,” said Arteta. “He is a player that I want to stay at the club. I love working with young players. You can see the talent is there, the ambition is there and he can fit with our structure and progress in the future. He’s part of the DNA and myself and the club are working to try to extend his contract. We’re trying to change the situation that we are in at the moment with him, and trying to convince him that this is the right place for him.”

“I have decided that I want to keep the player. The moment that I started to see more of the player and change certain things that I didn’t agree with, we decided to give it a go, tried to convince the player, try to show him what we want to do with him, why he fits in with what we are trying to do at the club.

The young talent and the top talent that we produce at the academy is with the final aim to put them in the first team. When I signed for this club it was one of the things that excited me the most because I love to work with them and it’s part of our DNA and the history of the club. When we have them, let’s keep them and we really think they are players that can take us to the next level,” he added.
The youngster had a right to be fearful of his first-team chances being restricted but Arteta should have done enough to convince him.
Since he arrived at the club, the Spaniard has not been afraid to hand the club’s younger players a chance to prove themselves.

That should give Balogun confidence. If he can keep impressing the boss in training, first-team opportunities will be just around the corner.
The talent is quick, strong and has a natural-born instinct in front of goal.
He has the potential to be a real star for Arsenal and they must pull out the stops to ensure he doesn’t walk away next summer
He has registered 15 goals from 40 appearances for Arsenal U-23s since he debuted for the age group in the 2017-2018 season.

In spite of having capped for England at the 2018 UEFA European U-17 Championship prolific Arsenal youth-team striker Balogun is not ruling out the possibility of switching international allegiance to Nigeria.
Born in New York and raised in the United Kingdom, Balogun is provisionally cap-tied to England as he represented the Young Lions at the 2018 UEFA European U-17 Championship, playing four games as England reached the semifinals, but the free-scoring Arsenal striker has hinted of switching international allegiance from England to Nigeria. 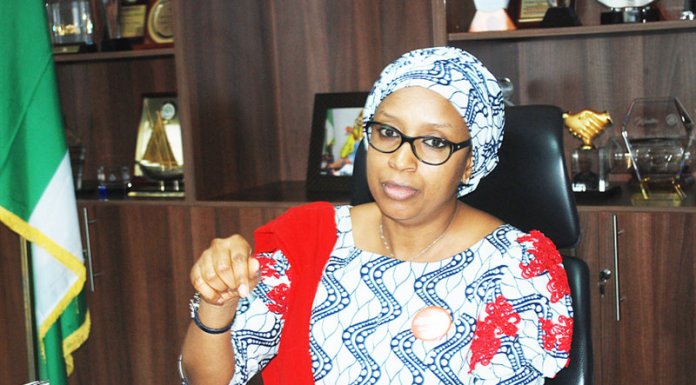