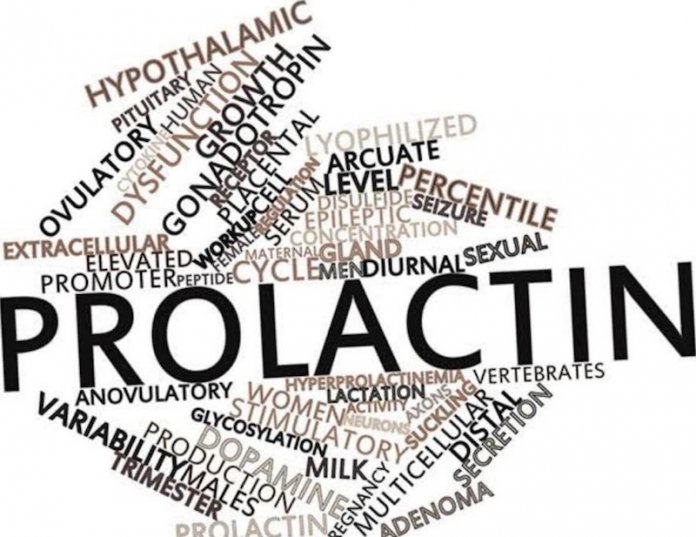 Hormones are chemical messengers that are produced in one organ and moves through the blood and body fluids to organs and tissues where they are needed to modify and control body functions. Reproductive hormones are one of the factors that contribute to fertility and conception. These hormones are responsible for the development of secondary sexual characteristics in men and women and also growth and maturation of sexual gametes. Excess or inadequate amounts of these hormones may cause infertility.

Prolactin is one of several hormones that is produced by the pituitary gland. Prolactin has many different roles throughout the body. Perhaps the most important role of prolactin is to stimulate milk production in women after the delivery of a baby. Prolactin levels increase during pregnancy causing the mammary glands in a woman’s breast to enlarge in preparation for breastfeeding. Prolactin also helps with the release of milk when the baby is feeding.

During the first several months that a woman is breastfeeding, the high prolactin levels also serve to inhibit ovulation. This is the reason why women who are breastfeeding do not get their periods and therefore do not often become pregnant. As time goes on however, the prolactin levels do not stay as high with breastfeeding and the woman may start to ovulate.

A condition of too much prolactin in the blood of women who are not pregnant and in men is known as HYPERPROLACTINEMIA. Hyperprolactinemia may also lead to galactorrhea; a condition which causes the breasts to produce milk outside pregnancy.

FUNCTIONS OF THE PROLACTIN HORMONE

Prolactin is one of the hormones that control fertility and it is produced by the anterior pituitary gland in the brain. In men, prolactin plays a role in testosterone secretion and in production of sperm cells. In women, prolactin helps to stimulate milk production after the delivery of a baby. High levels of prolactin during pregnancy is normal because the body is being prepared for breastfeeding (lactation).

CAUSES OF HYPERPROLACTINEMIA
• Pregnancy and Breastfeeding: Usually, a high level of prolactin in the body is considered normal during and after pregnancy, most especially while breastfeeding
• Prolactinoma: It is a noncancerous tumor of the pituitary gland that causes the gland to produce excess prolactin, thus leading to over secretion in the blood. This further causes a reduction in the levels of estrogen hormone in the body and it affects ovulation in women. In men, it alters testosterone and compromises sperm production.
• Hypothyroidism and Stress: Cortisol and adrenaline are stress hormones. These hormones coupled with excess consumption of carbohydrates causes an imbalance in the blood sugar levels. People are at an increased risk of frequent hypoglycemic episodes with an underactive thyroid. In order to activate the thyroid gland, the brain then increases the release of thyroid stimulating hormone (TSH). Over secretion of the TSH leads to high prolactin levels.
• Metabolic or hormonal conditions: Another factor that may affect the excess production of prolactin includes damage to other parts of the body. In particular, damages to or illnesses of the kidneys, thyroid, and liver can cause hyperprolactinemia. Hyperprolactinemia has also been connected with other common reproductive disorders, such as polycystic ovary syndrome (PCOS) and amenorrhea. Almost 1 in 6 people who have PCOS also have hyperprolactinemia.
• Medication: Drugs such as Antidepressants, Antipsychotics, Antihypertensive, and Antinauseals may increase prolactin levels in the blood.

The natural levels of prolactin in the body vary throughout the day. It gradually rises overnight and areat their highest in the morning. Stress also increases prolactin levels so it is advised to be relaxed before the test is done. A blood test is first performed to check prolactin levels and the blood is collected during fasting. If test result shows high prolactin levels, a physical examination is done to find any obvious causes or any breast discharge. Several questions may be asked concerning medical history, or any physiological symptoms to determine the possible cause. A magnetic resonance imaging (MRI) scan of the brain may be done to check if a tumor is present in the pituitary gland.