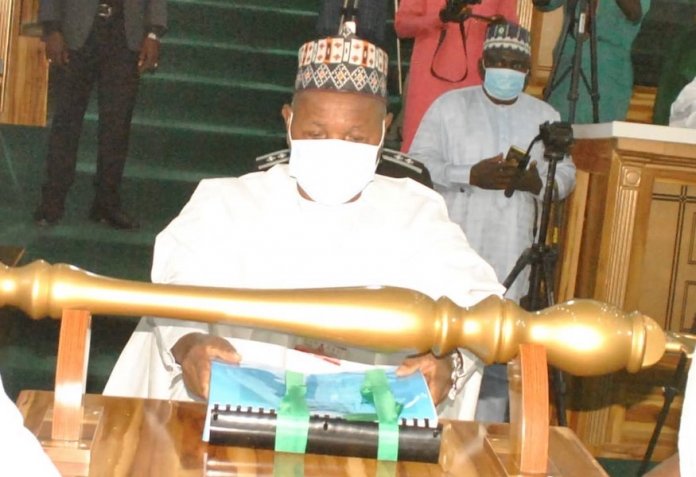 The Governor Aminu Bello Masari’s 2021 Budget of Recovery and Consolidation will lead to the completion of many ongoing infrastructural projects and boost rural development in the state, writes Francis Sardauna

Governor Aminu Masari of Katsina State, on Wednesday, November 18, 2020 took a bold step by presenting the state’s N282,787,930,655.00 2021 appropriation bill to the State House of Assembly for its deliberation and consideration.

The budget, christened “Budget of Recovery and Consolidation ”, seeks to sustain and consolidate on the gains of the 2020 budget. Amongst the major highlight of the budget is ensuring timely completion of all ongoing projects in the state that cut across road, health, education, water, agriculture and environment.

The total amount projected by the governor to finance the appropriation bill is the sum of N172,252,927,970.00 which comprises N57,180,527,226.00 as Internally Generated Revenue (IGR) from the board of internal revenue, ministeries, departments and agencies as well as the balances of the 2020 Budget. The revenue receivable through the Federation Account is estimated at the sum of N115,072,400,744.00.

Simialarly, the sum of N196,161,842,911.00 which represents 70 per cent of the total budget proposal is estimated for the capital expenditure in the 2021 budgetary allocations for the fiscal year.

Governor Masari, while presenting the budget estimate, said apart from the new projects initiated and executed within the 2020 fiscal year, the state government succeeded in the rehabilitation and upgrading of existing ones in accordance with the ‘Restoration Agenda’ of his administration in spite of serious economic meltdown and insecurity orchestrated by bandits in the state.

He said the restoration plans of his administration include programmes, projects and policies to be implemented under education, health, water resources, agriculture, environment, work, housing and transport sectors of the state government.

He explained that the budget was designed to complete ongoing projects and initiate other capital projects that can be completed within the last three years of his administration.

Masari enumerated areas of focus in the 2021 budget to include employment generation, youth empowerment, market development, massive investment in agriculture, health, roads construction, among other noted projects to enhance the socio-economic well-being of the citizenry.

In addition, the governor promised that his government will focus on empowerment, boosting production, developing value chain and strengthening commercial venture for a stable economy as well as the creation of conducive environment for the participation of informed sector to attract investors to the state in order to boost employment opportunities in the state.

To ascertain the success of the appropriation bill, Governor Masari reiterated that both the executive and legislature must brace up to the duty of strengthening their partnership to enable them realise their goal of leading the state to the promised Land.

The governor, however, called on residents of the state, particularly traditional and religious leaders to join the state government “in our collective prayers against banditry, cattle rustling, kidnapping and all other forms of insecurity across the state”.

The speaker revealed that the main thrust of the 2021 budget proposal is the promotion of the welfare of people of Katsina State by boosting infrastructure and expanding job opportunities for the teeming youths, assuring of speedy passage of the appropriation bill.

He said, “Presenting the budget proposal earlier than enough is a welcome development that needs to be appreciated by all and sundry, considering that fact that if a budget is presented early enough, it will give the legislature the ample time to deliberate on its components.”

However, during the budget breakdown at the old Government House, the State Commissioner for Budget and Economic Planning, Mr. Faruq Lawal-Jobe highlighted the sources of revenue to finance the 2021 budget to includes domestic grants, foreign loan and grant, recurrent revenue, bonds and closing bank balance.

He added that: “our decision to borrow using the bond is for three reasons; the rules cannot be change in the middle of the game, the best time to borrow is now when the risks are very low and then, you have a very long period to repay which will not in any affect the operations of the government and any other obligations that we have”.

The commissioner explained that part of the loan would be used for the completion of major infrastructure projects which were abandoned due to paucity of funds. He said the projects include the expansion and rehabilitation of 22 general hospitals across the state, of which eight have been completed.

According to him, “we also hope to upgrade three others to general hospital status and construct key major roads projects at the urban and rural areas of the state. In addition, we plan to build more primary and secondary schools and have a school of nursing in Daura as well as school of midwifery in Mani council area”.

The commissioner for budget and economic planning added that while the state government is targeting to raise N50 billion in the Sukuk Bonds, it also expecting to raise another N18.5 billion in foreign loan and grants for next year’s expenditure.

Whatever reason given, like every other philanthropist, whose interest is leaving behind a lasting legacy for his masses, Masari’s decision to complete all ongoing projects despite the financial uncertainty stood him out like an iroko tree.