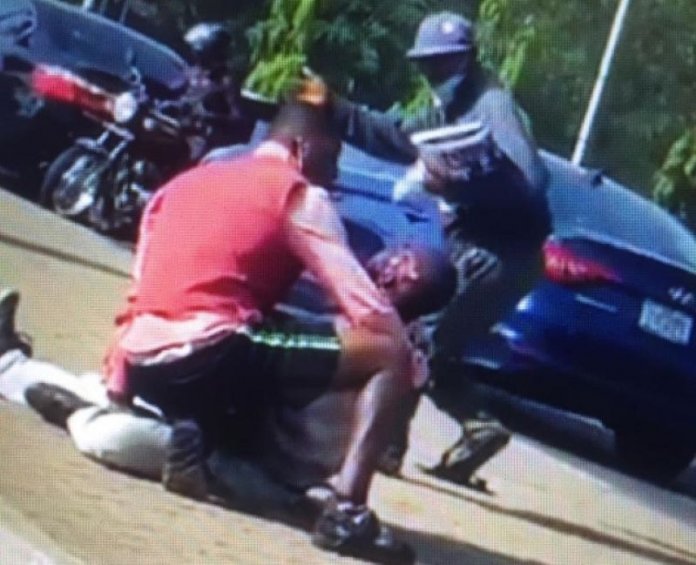 It was indeed a sad day. A trigger-happy security aide attached to the convoy of the Speaker, House of Representatives, Hon Femi Gbajabiamila caused havoc and soured a friendship built for over a decade. The newspaper vendor, Ifeanyi Okereke, was among the vendors close to the National Assembly Complex who had bonded with the congressman for years.

Gbajabiamila strips himself of all airs and thinks less of his privileged position to banter with the newspaper vendors who had been his friends before he became first among equals in the green chamber. They often exchanged banters and had liberty interacting with him until last week when the tragedy struck.

The avoidable unfortunate incident is yet another sad reminder of how reckless and overzealous security operatives could be whilst discharging their duty. The security operatives’ recklessness recently got unbearable and young Nigerians had to occupy major cities across the country to demand for EndSARS, #EndPoliceBrutality and #PoliceReforms.

This unfortunate event should push the frontiers of the scope of work of the legislature to not just enact or amend act to reform the police but also other security outfits. Contrary to the earlier assumption, the culpable officer is not an officer in the Nigeria Police Force but an operative of the Department of Security Service (DSS).

In sane society, anyone who bears a firearm is thoroughly scrutinized and undergoes a series of tests to ascertain his psychological and mental state. All arm-bearing security outfits in the country need overhauling to forestall future needless loss of lives of innocent citizens.

Gbajabiamila in his characteristic forthright style came out to tell the world what happened. He didn’t colour the sad event and spoke the truth on how one of his esteemed friends was accidentally killed by one of the security details attached to him. He was sad and sorrowful that a happy moment turned into a moment of anguish. In a statement he personally signed, Gbajabiamila admitted that, “A horrible incident has taken place…

“My value for human life and my respect for all people – irrespective of socioeconomic status –is what endeared me to these vendors and these are the reasons why I stop my convoy quite often to connect with them. For one of them to have been shot by my security detail is horrific and I cannot begin to imagine the grief and loss Ifeanyi’s family must feel on this sad day. No family should have to go through this.

“I am personally distraught about this incident and my deepest sympathies go to the victim, his family and Abuja vendors”. To ensure that justice is served , Gbajabiamila handed over the DSS officer, Abdullahi Hassan, who shot dead the newspaper vendor, to the secret police for further actions. The trigger-happy operative has since been suspended from the convoy of the speaker.

In confirmation of Gbajabiamila’s position, the DSS spokesman, Peter Afunnaya in a statement issued on Friday confirmed that the officer was in detention. “The Service hereby confirms that the suspect is one of its personnel deployed to the Speaker’s Convoy as a security detail,” the statement partly read.

“As part of its disciplinary procedures in the instance, he has been taken into detention. In addition, the Service has opened a detailed investigation into the matter. And as already stated by the Speaker that he has been suspended from his Convoy, the Service has further withdrawn him from the assignment”, Afunnaya said in the statement.

Gbajabiamila on Saturday was at the residence of late Okereke at Kwata village,Madalla-Suleja, Niger State where he condoled with the family and pledged to cater for the needs of the deceased’s wife and other members of his immediate family.

On the children left behind by Okereke, Gbajabiamila said, “Those children have now become my children. I have made commitments to the family to train them until they become adults. I have instructed the lawyers in my office to immediately set up a trust fund for them until adulthood. The incident has touched me in no small measure and in ways difficult for anyone to understand. I am a man of peace and not violence.” The speaker also promised to get justice for the late newspaper vendor. Gbajabiamila went further to meet with colleagues of late Okereke under the auspices of the Abuja Newspapers Distributors Association (ANDA) and the Newspapers Vendors Association, Abuja (NVAA). He assured them that their departed colleague won’t die in vain. “The arc of the moral universe is long but it always bends towards justice”, the speaker assured.

This Tuesday when the House resumes for plenary, Gbajabiamila disclosed that the House will honour late Okereke. With heavy heart, the speaker said, “Let me address you not as the Speaker but as Femi Gbajabiamila, a citizen of the Federal Republic of Nigeria, who has been caught unawares in the middle of this unfortunate incident.

“Many of you that have been following me from the beginning know that championing the cause of the masses has been my life work as a legislator. I have been a champion of the common man and therefore the irony of this is not lost on me and many of us. However, I will continue to do this as long as I live.

“I feel your pain. Your pain is my pain. My pain pales into insignificance when compared to what you or the family may be feeling at this time.

May his soul rest in peace.”