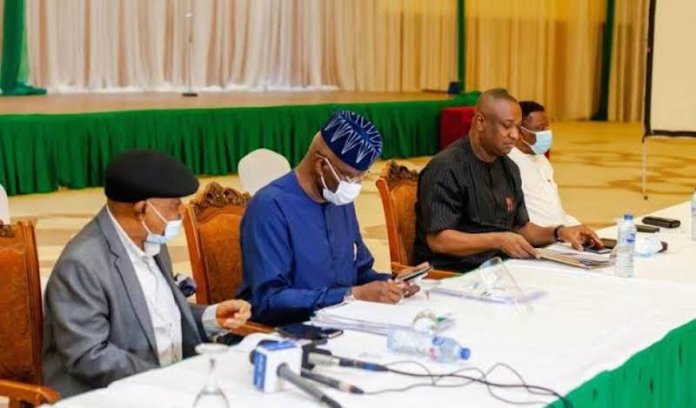 The meeting between the federal government and the organised labour on the hikes in fuel pump price and the electricity tariffs yesterday ended in disarray as the labour leaders walked out of the parley in anger, barely 10 minutes after it commenced.

As soon as the meeting started at 8:18 pm at the Presidential Villa in Abuja, the Trade Union Congress (TUC), President, Mr. Quadri Olaleye, raised the issue of the latest hike in fuel pump price from N160 to N170.

The labour expressed disappointment at the manner in which the federal government treated its negotiations with the unions.
It frowned at the decision by government to further increase fuel price while discussion was still not concluded on the effects of the earlier hike in prices.

Addressing the meeting, Olaleye described government’s action as a slap on the face of labour and an attempt to blackmail them in the minds of the public as compromised unions.
Representatives of the Nigeria Labour Congress (NLC), also spoke in similar tone, accusing the federal government of reneging on their understanding with the labour team.
Olaleye said that nothing has been done in terms of implementing the promises made to labour during the previous talks held over a month ago.

The labour staged tha walk-out when the Deputy President of NLC, Mr. Joe Ajero insisted that the issue of the recent increase in fuel price should be put first on the agenda for discussion but the government side said that it would rather have other issues deliberated on before delving into the fuel price increase.
At this stage, there was heated argument with the two sides engaging in a shouting from match, leading to the walk-out by the labour team.

Speaking to journalists shortly after, Olaleye said:”We decided that it is not going to be business- as-usual because we have seen the insincerity of government and that they are putting us at risk. “They are taking us for a ride. We are in the process of negotiations and in the middle of discussion, they just announced an increase in the pump price of petrol. And it is no other authority but the Nigerian National Petroleum Corporation (NNPC). When has the NNPC become the sole authority to approve fuel price increase? Government is taking us for ride and we leaving the meeting and we are going to consult with our organs and will brief the media on our next move,” he said.

Also while speaking on the fallout of their disagreement with government team, the NLC General Secretary, Mr. Emma Ugbaja said: “We came to a meeting with the federal government and you are aware that we have been having these meetings for sometimes over two key issues, hike in fuel price and electricity tariff. We have had some understanding over time, but while these meetings were ongoing, we were slapped with a new increase in petrol price. We felt that was beyond our understanding with the federal government and we felt that should be the first item on the agenda for discussion yesterday but government side said the discussion should be on some imaginary palliatives before what was causing the need for the palliatives and we felt that was putting the cart before the horse. At this point, we felt that we should not continue with a meeting whose agenda is wrongly prioritised”.

However, the Minister of Labour and Employment Senator Chris Ngige told journalists that the government team was willing to discuss issues of the petrol price but that it felt that the meeting should follow the fixed agenda.
Ngige said that the government side accepted to include the issue of increase in petrol in agenda but to be discussed after other related issues.

Ngige said that there was nothing bad about what happened, since labour said they were going to consult their organs, adding that government would fix a date for another meeting.
While welcoming labour to the meeting, the Secretary to Federal Government of the Federation (SGF), Mr. Boss Mustapha thanked them for giving federal government strong support so far.
He also explained some of the efforts being by the government to reduce the sufferings of Nigerians.