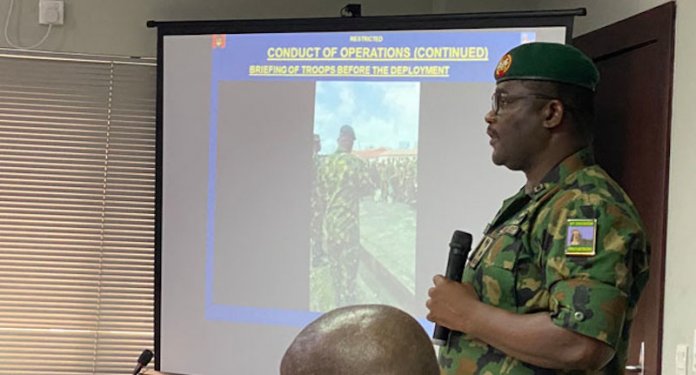 The 81 Division of the Nigerian Army yesterday reiterated its stance that soldiers shot blank bullets into the air and not live bullets, even though they had both in their kitty when they were deployed in Lekki Tollgate on October 20, this year, to enforce the Lagos State Government curfew.

Commander, 81 Military Intelligence Brigade, Brig. Gen. Ahmed Taiwo, had during the cross-examination at the Lagos Judicial Panel, admitted that while deployed troops had both live and blank bullets, they only fired the latter because the threat level was minimal.

According to the army, it became necessary to reiterate its stance following the backlash it generated when they admitted that soldiers went to Lekki Tollgate with live bullets as well as blank bullets.
In a statement issued by the acting Deputy Director, 81 Division Army Public Relations, Major Osoba Olaniyi, the Army argued that there was nothing wrong for troops to carry blanks and live ammunition because it’s part of their equipment for internal security operations.

Olaniyi said: “The attention of the Headquarters 81 Division Nigerian Army has been drawn to news items on both the social and mainstream media insinuating that the troops of Nigerian Army contradicted its evidence of firing blank ammunition when it also carried live ammunition for Internal Security Operations on October 20, 2020.
“We hereby state unequivocally that carrying both blank and live ammunition is part of our Table of Equipment for Internal Security Operations.

“The blank ammunition was fired into the sky and not at the protesters. The results are all glaring as there was no fatality recorded – this has been corroborated by both BBC report and other reputable news media outfits.

“The use of blank ammunition/minimum force achieved the aim of dispersing the hoodlums and crowd.
“It is pertinent to reiterate that the Nigerian Army is a law-abiding institution that acts in tandem with her Rules of Engagement.
“We therefore wish to advise all stakeholders to guard against being used by local and foreign agents of destabilisation who do not wish this country any good,” he added.