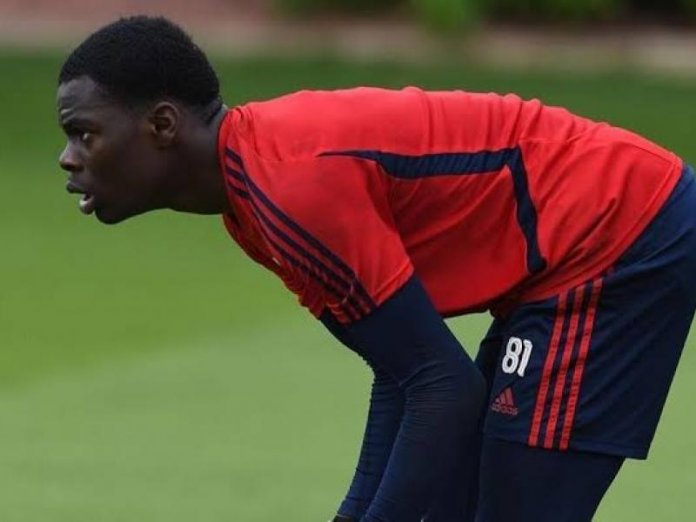 At just 17 years, he is already attracting serious attention at both club and international levels. While Premier League clubs are scrambling for his signature, England, Nigeria and Uganda are involved in a three-way battle to secure the international services of Ovie Ejeheri

Meanwhile, the English FA have called him up to join their youth goalkeeper training camp in December.
A number of Premier League clubs are also watching him, as he still hasn’t got a professional deal at Arsenal.
Ejeheri joined Arsenal at the age of five, progressing through the ranks to the U-18s. He also made the bench for the U-23s on one occasion this season. However, the goalkeeper spent almost the entirety of the last campaign out injured.

The 17-year-old started his first game of 2020/21 in the U-18s’ last match against Norwich. He made a couple of saves and was close to keeping a clean sheet before the away side scored in the 86th minute.
Ejeheri also trained with Arsenal first-team over the international break, and the fact he’s starting matches for the U-18s suggests he could still sign a professional deal to stay. But clearly, there’s a lot of interest at both club and international level if he doesn’t.

The 17-year-old Anglo-Nigerian has been in fine form for the Gunners’ U-18 team over recent months and the England invitation presents him a chance to be handed an international call-up.
Should Ejeheri impress English national team selectors, he could be handed a call-up to England’s squad ahead of preparations for the 2021 FIFA U-20 World Cup billed for Indonesia.

Speaking to Goal through his representative Segun Jegede of Utmostt Sports Management, the teenager revels in this opportunity that will help him ‘showcase’ his talent as well as boost his professional career.
“I feel it’s a very good opportunity for me to showcase my talent and put myself in the mix,” Ejeheri told Goal.
“I’ve been working hard at Arsenal for over a decade. I’m happy that the work I’ve been putting in is being noticed by the English FA and coaching staff.

“It’s definitely a means of progression for my career. It’s a development that will challenge me to keep raising the bar in my career endeavours.
“It’s a step in the right direction for me to get more recognition in the England set-up.”
Born in Greenwich, London to a Nigerian father and a mother from Uganda, the goalkeeper could spark a selection war between Uganda, Nigeria and England in future.
Ejeheri, whose football role model is Italy’s Gianluigi Buffon, also talked about his future and the heights he would love to reach

“My goal in the next three years is to play regular first-team football at club level and represent England or Nigeria at international level,” he continued.
“I look forward to the challenges of professional and international football at the highest level.”
Alongside Nigeria prospects like Miguel Azeez, Nathan Butler-Oyedeji, Mazeed Ogungbo and Daniel Oyegoke, Ejeheri is a second-year scholar at Arsenal for the 2020-21 season and could be offered a professional contract should he continue to dazzle academy coaches.