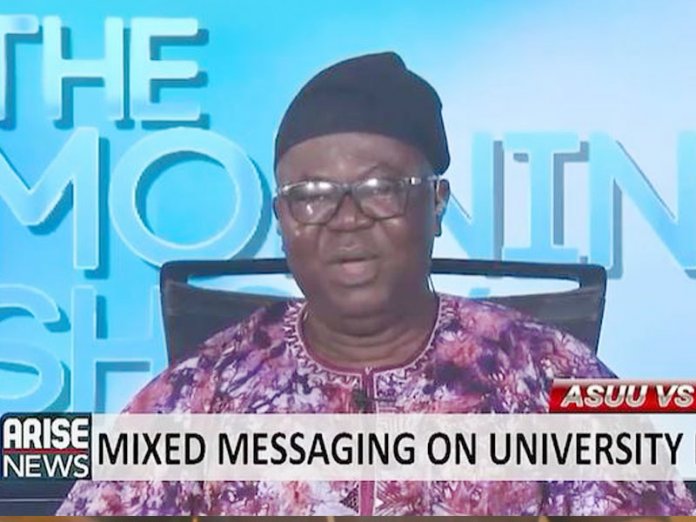 The President of the Academic Staff Union of Universities (ASUU), Prof. Biodun Ogunyemi yesterday disclosed that private universities were recruiting the members of the union due to the inability of the federal government to meet its demands.

The union has also warned that it would no longer accept promises from the federal government because the government has not kept promises it made in the past.

“Talking about options, whether they want to go to court and intimidate the union to surrender. You don’t do that with scholars, no country has ever survived it because we have options too.

“We are also aware that some few months back, Ethiopia came to Nigeria, and harvested as many as 200 professors and they are still looking for more.

“I don’t know if the government wants their appointees to start teaching the students. Of course, many of them don’t have their children in public universities; that is why they cannot feel it. Our scholars are our national assets and we should not allow them to be decimated.”

Speaking further, the ASUU president said the union would resist any attempt by the federal government to elongate the process of the integrity test being conducted on the software of the University Transparency and Accountability Solution proposed by the union.

Ogunyemi also faulted a statement credited to the Minister of Labour and Employment, Senator Chris Ngige, who reportedly said that the Nigeria Information Technology Development Agency (NITDA) was conducting the integrity test on the UTAS software and it would take between six and eight weeks to be completed.

The ASUU president said, “On UTAS, I want to say that this thing about six, eight weeks is unfounded. I want to tell you categorically that if the government is sincere and conscientious about the process in motion now, within one week, we can put the integrity test behind us.”

“As at yesterday (Wednesday), we did a practical demonstration with more than 30 experts in NITDA, UTAS was demonstrated at NITDA yesterday and none of the experts faulted it. And with that, we are good to go.

“UTAS has no problem, UTAS has no blemish, UTAS is far higher in integrity, content and validity over the IPPIS. There is no basis for comparison. So, let no government official, no matter how highly placed slow down the process, otherwise, our members will resist it with all legitimate means,” Ogunyemi said.

He vowed that ASUU will not change its stand on the University Transparency and Accountability Solution (UTAS).

Ogunyemi also added that the federal government’s claim that it has addressed all issues requested by ASUU is false adding that there are four outstanding issues yet to be resolved.

“As for addressing all the issues except one, that is not correct. How do you address issues? You address issues by producing results. Our members have been asking questions. If government says they have addressed all our issues, are the withheld salaries paid? The earned academic allowances (EAA) they promised have they paid? The inauguration of the visitation panel has that been done? Has negotiations commenced? I have mentioned four issues – which of these have they delivered on?