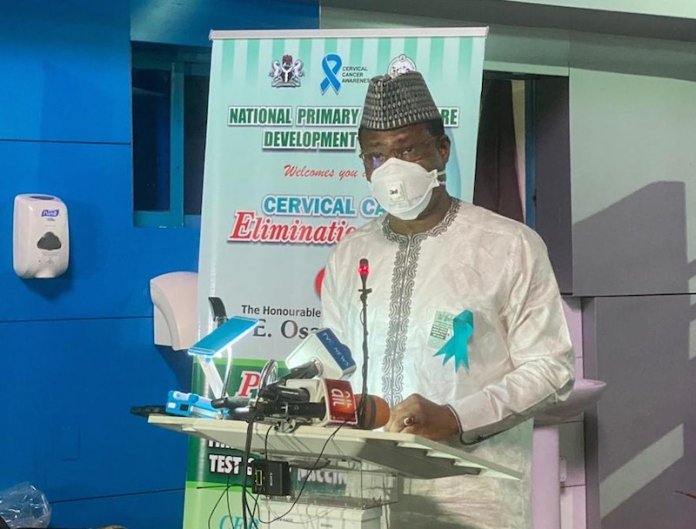 As the world marked a new dawn in the campaign against the scourge of Cervical Cancer with emphasis on concerted effort to eliminate the virus, Nigeria is faced with the onerous challenge of saving her female folk from the avoidable disease that claimed over 14,000 lives in 2018, writes Onyebuchi Ezigbo

Cervical Cancer affects women especially from ages of 15 and above. It directly attacks the woman’s womb and the name of the virus that causes this is known as Human Papiloma virus-HPV. The focal agency in charge of that, National Primary Healthcare Development Agency (NPHCDA) said the country is stepping up campaign to join the global community to eliminate Cervical cancer latest by the year 2030.

According to the Director at the NPHCDA, Dr. Onu, Cervical cancer has claimed the lives of over 500,000 women worldwide between 2018 and 2019, while 14,000 died of the disease in Nigeria within the same period. The official who featured in an FM radio programme on Tuesday in Abuja, said the agency is embarking on sensitisation to draw attention on the deadly disease and to encourage parents to allow their daughters undergo vaccination at the right time.

The World Health Organisation (WHO) also said that Cervical cancer is a preventable disease. It said that it is curable if detected early and adequately treated. According to the world health body, it is the fourth most common cancer among women globally. WHO said without taking additional action, the annual number of new cases of cervical cancer is expected to increase from 570 000 to 700 000 between 2018 and 2030, while the annual number of deaths is projected to rise from 311 000 to 400 000.

WHO’s Assistant Director-General Dr. Princess Nothemba (Nono) Simelela said: “In low- and middle-income countries, its incidence is nearly twice as high and its death rates three times as high as those in high-income countries. The huge burden of mortality related to cervical cancer is a consequence of decades of neglect by the global health community.

“However, the script can be rewritten. Critical developments include the availability of prophylactic vaccines; low-cost approaches to screening and treating cervical cancer precursors; and novel approaches to surgical training. Through a shared global commitment to the Sustainable Development Goals and leaving no-one behind, the countries of the world are forging a new path to ending cervical cancer”.

Beyond the issue of awareness about preventive vaccination and possible cure, Nigeria is facing the challenge securing enough vaccines for the populace and even facilities for accelerated testing. Another challenge limiting our capacity to deal with the health situation is the poor state of facilities at most of hospitals, especially in the rural areas. For instance, most of the hospitals lacked the testing capabilities to attend to many who needed to know their status. Equally a major constraint is paucity of funds to acquire the vaccines as well the politics that has come be associated with such vaccines that are in high demand.

The Director of Disease Control and Immunisation, Dr, Bassey Okposu, who was also a guest at the radio programme said there are some challenges affecting efforts to eliminate Cervical cancer in the country. He said: “The problem we are having is the fact that the global bodies that are producing the vaccines have denied the country of having vaccines that is enough to serve her needs since 2017”.

For now, Okposu said that Cervical cancer remains a very deadly disease with no cure yet except use of preventive vaccine. Again, Okposu explained that the federal government has approved that vaccine against Cervical cancer be included in the routine immunization programme since 2017. This is not the first time the country will be facing the challenge of vaccinating her citizens against infectious diseases. The country had successfully withered the challenge of vaccinating millions of children against polio with a success rate that has now led to the declaration of Nigeria as polio-free by WHO.”

Okposu said Nigeria is working with the international community to ensure that adequate vaccines are made available for use in 2021 to immunise our girl child.

“We love our girls and don’t want them to die of Cervical cancer. The commonest cause of Cervical cancer is the Human Papiloma virus-HPV. It is contacted through infection during sexual intercourse. This grows in the woman’s body and matures into cancer at later part of the person’s life.

Okposu said it takes about 15 -20 years before the virus begins to manifest as cancer.”This is why we advise female, especially young girls to stay away from having sex with men before becoming adult. Parents are also advised to guide their children to refrain from having sex very early in life. Once contacted at an early age, it grows and later matures into cancer of the cervix and becomes a serious threat to life. It is good to keep our girls safe from contacting this infection, that is the only way of preventing it from happening”.

In a statement issued to mark the commencement of the campaign, WHO said:”Today’s development represents a historic milestone because it marks the first time that 194 countries commit to eliminating cancer – following adoption of a resolution at this year’s World Health Assembly. Meeting the following targets by 2030 will place all countries on the path toward elimination of Cervical cancer”.

The WHO said that the strategy involves investing in the interventions to meet these targets which can generate substantial economic and societal returns. To this end, it said that an estimated US$ 3.20 will be returned to the economy for every dollar invested through 2050 and beyond, owing to increases in women’s workforce participation. Accordingly the figure is expected to rise to US$ 26.00 when the benefits of women’s improved health on families, communities and societies are considered.

“Eliminating any cancer would have once seemed an impossible dream, but we now have the cost-effective, evidence-based tools to make that dream a reality,” said WHO Director-General Dr Tedros Adhanom Ghebreyesus. “But we can only eliminate cervical cancer as a public health problem if we match the power of the tools we have with unrelenting determination to scale up their use globally.”WHO said

The WHO strategy is being launched at a critical time, when COVID-19 pandemic has posed challenges to preventing deaths due to cancer, including the interruption of vaccination, screening and treatment services; border closures that reduced the availability of supplies and that prevent the transit of skilled biomedical engineers to maintain equipment.

WHO said that pandemic has created other new barriers preventing women in rural areas from traveling to referral centres for treatment; and school closures that interrupt school vaccine programmes. “To the extent possible, however, WHO urges all countries to ensure that vaccination, screening and treatment can continue safely, with all necessary precautions. The fight against cervical cancer is also a fight for women’s rights: the unnecessary suffering caused by this preventable disease reflects the injustices that uniquely affect women’s health around the world,” said Dr, Princess Nothemba Simelela.

Last Tuesday’s launch was celebrated with a day of action across the globe, as ministries of health, partners, and cancer advocates engage in activities to improve access to cancer prevention and treatment for girls and women. It is an opportunity for countries like Nigeria desirous of surmounting the challenges posed by Cervical cancer to adopt recommended measures and pursue the targets set by the global health body.