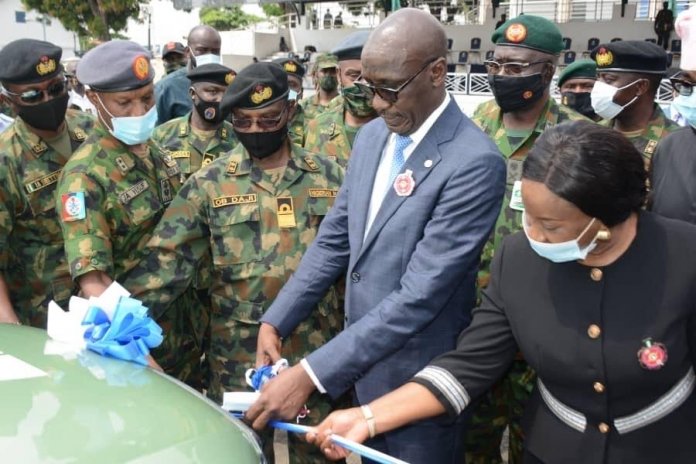 Chiemelie Ezeobi and Mary Ovie writes that in consolidating the mobility assets of Nigerian Navy, the service recently took delivery of patrol vehicles and quad bikes to boost anti-pipeline vandalism operations from Atlas Cove and in boosting infrastructural development, unveiled the Chief Boatswain’s Mates for heads of Rating cadre

Any military is as good as its last acquisition as the acquisition of equipment and platforms are part of the decisive and critical factors in determining the outcome of any war or operation. In fact, many would argue that it’s a fundamental component of military element of national power. Thus, aside professional competence, for an efficient, effective and functional force, capacity development is critical and fundamental.

Recently, the mobility assets of Operation AWATSE, an ongoing operation against pipeline vandalism, was boosted with patrol

vehicles and quad bikes to easily access the tortuous terrain. The donation was probably buoyed by the numerous successes recorded by the operatives, which has led to considerable reduction in illegal pipeline vandalism and in essence, oil losses.

Reduction in Oil Losses
Group Managing Director (GMD), Mele Kyari, recently commended security forces for the reduction in oil losses. He said this at the official handover of four patrol vehicles and four quad bikes to the Taskforce against vandalism, Operation AWATSE at the headquarters, Western Naval Command (WNC) in Apapa, Lagos.

According to him, the reduction in losses was a feat they were very proud of, adding that by early last year, the level of losses suffered from vandalism along the pipelines from Atlas Cove to Ilorin were impossible to manage.

“We sought support of the Chief of Defence Staff (CDS) who instructed the set up of the operation AWATSE that led to the arrest of these situation reducing our losses to less than 50 per cent of what we knew at that time.

“It enabled us also to increase flow into that line from less than 800,000 to 2.6 million tonnes by the end of 2019. Currently, we know that we will exceed this target. So, it is a huge success because without the intervention of Operation AWATSE and all the associated support from all the service- the Nigeria Police, Nigerian Security and Civil Defence Corps (NSCDC), we would not have achieved this.

“So, it is a very critical assignment for us and we are very happy that this has happened. We have reduced our losses from what was N800 billion in 2018 to less than N82 billion and we are very proud of this. Therefore in terms of accountability and transparency, we have achieved that and we also promise that we will perform excellently on behalf of the Nigeria people.

“That’s a reflection of the financial statement, that’s what the financial statement tells you that this company has come of age. We have automated almost over 80 per cent of our processes, we have taken out discretion in over 80 per cent of our processes in that way we know this company by the close of this year, we would declare our dividend to Nigerians.”

Boosting Inaccessibility of Pipelines
Speaking on what the NNPC was doing to make the pipelines not readily accessible to vandals, he said the corporation was tackling the issue from multiple fronts, adding that asides empowering security agencies to closely monitor the pipeline areas, the NNPC was using technology to monitor vulnerable pipelines.

He said plans were also on to bury the pipelines deeper into the ground through a process called HDD, which he said was very expensive.
“They are very expensive but it is not every line that you need to do this. There are segments that we have done HDD line. We continue to improve by the way, we are going ahead with a BOT process where the entire lines should be replaced so at the end of the day, we would put the best of class processes on ground and at the end, those issues will become very minimal.”

Olonisakin who was represented by the Director of Operations, Defence Headquarters, Air Vice Marshal (AVM) Jack Yusuf, reiterated the need to establish a Forward Operating Base (FOB) at Tarkwa Bay for credible presence to sustain gains recorded, adding that he had approved the deployment of additional 110 troops, to hold the ground and prevent the return of many of the cleared hoodlums.

The CDS noted that a clearance operation, KUROMBE under AWATSE was conceived last year to rid the Atlas Cove Storage facility and its network of pipelines of activities of criminal elements that were causing the nation serious economic loss.

“The dwindling oil prices internationally saw the downward trend in government revenue generation for some time now. This among others has necessitated the need for judicious use of resources to minimise waste. Therefore, all efforts including the terrain advantages that these assets offer, must be emplaced to ensure the security of pipelines and the smooth distribution of petroleum products across the country.

“Let me assure you that the Defence Headquarters will continue to provide the necessary support to ensure the successful take off of the FOB and other initiative that will ensure adequate security of the Atlas Cove and other critical national infrastructures.

“As expected, the magnitude of discoveries and subsequent destruction of illegal structures and equipment used by these unscrupulous elements and saboteurs, we know that the criminals will not back off easily. Their inability to return after several attempts, under various guise including several petitions and litigations will not deter our efforts. Consequently, I have directed the legal department to examine all the petition received and take the necessary legal steps to address them.”

Gains of Operation KUROMBE
Giving an update on the gains recorded by the ongoing Operation KUROMBE, Commander, Operation AWATSE and Flag Officer Commanding (FOC) WNC, Rear Admiral Oladele Daji said between December 21, 2019 to August 3, a total of 2,862 illegal structures/shanties that encroached on the NNPC Pipeline Right of Way or were used to perpetrate pipeline vandalism were removed.

He added that, “similarly, 553,879 x 25 litres empty jerry cans estimated at N553,879,000 were recovered and destroyed. If the vandals had succeeded, the empty jerry cans would have been used to steal about N1.6 billion worth of petrol.
Additionally, 3,708 x 25 litres jerry cans filled with PMS worth N13,997,700 were recovered and handed over to the depot manager. Furthermore, a total of 310 hand-dug pits filled with PMS used by pipeline vandals for siphoning PMS were discovered during the clearance operation, KUROMBE.

“It is gratifying to note that NNPC maintenance team have permanently sealed the pits. During the clearance operations, 31 persons, including some foreigners, were arrested for involvement in petroleum products theft and pipeline vandalism and were handed over to relevant prosecuting agencies.

“These among others were some modest achievements of the Operation KUROMBE in concert with other security agencies, particularly the NSCDC, DSS and the Marine Police. The NNPC also supported security operations by hiring Swamp Buggies and fueling.”

On the latest addition of mobility assets, Daji said the vehicles and quad bikes have been modified to operate in challenging terrains at the Atlas Cove and adjacent Tarkwa Bay Island.

The recently unveiled two newly constructed and furnished Chief Boatswain’s Mates (CBMs) accommodations is made up of two bedroom detached bungalows with a boys’ quarter each located inside Navy Town in Ojo and were handed over to the CBMs of the Western Naval Command (WNC) and Naval Training Command (NAVTRAC) as official accommodations.

CBM is the highest appointment in the Non-Commissioned Officers (NCOs) cadre of the navy and equivalent to the Regimental Sergeant Major (RSM) in the army.

Unveiling the accommodations, the Flag Officer Commanding (FOC), WNC, Rear Admiral Oladele Daji said they were awarded by the Chief of the Naval Staff (CNS), Vice Admiral Ibok-Ete Ibas to ensure that CBMs have their official residence in their areas of deployment.

He noted that the CBM was an institution and a very important office in the navy because they are the ones who control and ensures discipline and professionalism in the ratings cadre, adding that the move was also part of ongoing and consistent efforts by the navy to boost personnel moral through various welfare programs and projects.

He said: “This is further testimony of the Chief of the Naval Staff’s untiring effort to upgrade existing infrastructure and develop new ones across all commands, units and establishments in the Nigerian Navy (NN) as well as improving on the welfare needs of personnel and our families.

“The CBMs as Admirals of the Lower Deck are leaders and the backbone of every major shore establishment in the NN. Due to their rich experience by virtue of their long years of service, the CBMs are a veritable link and moderating influence between the officers’ and ratings’ cadre.

“They train, direct and supervise working parties
and routine maintenance in the NN establishments. Therefore, these institutional houses are symbolic of NN appreciation for their dedication to duty and to spur other ratings to aspire to attain the rank of Navy Warrant Officer (NWO) and office of the CBM.

“This accomplishment underscores the determination of the NN leadership to consolidate on the infrastructural development and personnel welfare. I deem it most appropriate therefore to commend the consistency and outstanding effort of the Chief of the Naval Staff, Vice Admiral Ibok-Ete Ibas towards meeting the accommodation needs of all categories of personnel.

“I hereby assure the CNS that the CBM Institutional Houses will be well maintained and the command shall continue to accord priority to improving the infrastructure provided by the government in all our barracks and vases. It is also pertinent to mention that the Nigerian Navy would not have been able to accomplish the enormous infrastructural development witnessed over the past five years without the support of the federal government.

“To this end, our profound gratitude goes to President Muhammadu Buhari, for his commitment and determination towards addressing the welfare needs of the personnel of the Armed Forces.”