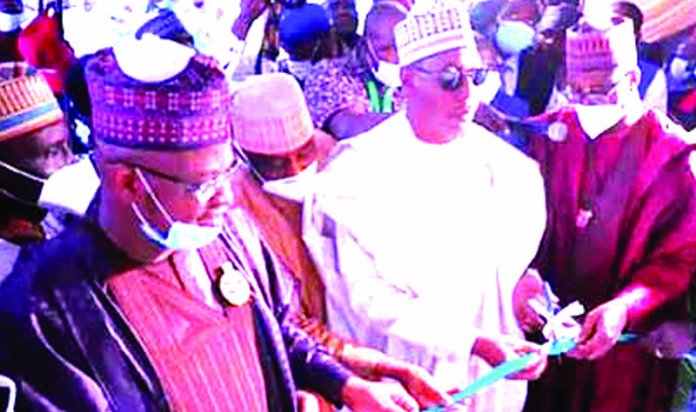 Borno State Governor, Babagana Umara Zulum on Saturday unveiled a 25-year strategic plan with immediate, medium and long implementation phases, through which Borno targets to become world class after fully recovering from the impacts of more than $6 billion worth of destructions caused by the Boko Haram terrorist group.

Zulum announced that all activities of government would henceforth be executed according to the development plan.
Minister of Finance, Budget and National Planning, Zainab Shamsuna Ahmed, did the formal launch at an event hosted by Zulum in Maiduguri, the state capital.

The gathering was also attended by the Minister of Communications and Digital Economy, Dr. Isa Pantami; former Governors of Borno State, Kashim Shettima and Ali Modu Sheriff, serving and former National Assembly members, traditional rulers led by the Shehu of Borno, representatives from the international community, members of Borno assembly and executives, party leaders and diverse stakeholders, some of whom joined through the webinar.

Governor of Kwara State, AbdulRahman AbdulRazaq, and NNPC’s GMD, Mele Kyari were among the high profile persons, who joined via a zoom link that was publicised ahead of the event held at the Multipurpose Hall of the Government House in Maiduguri.
Zulum, a University professor, had directed a team, led by his Adviser on Sustainable Development, Partnerships and Humanitarian Responses, Dr. Mairo Mandara, to interact with all stakeholders.

This included the grassroots, ministries and agencies of government to collate views on immediate, medium, and long term needs of communities in all the 27 Local Government Areas of Borno State, as well as how the state could speed up its recovery from destructions caused by Boko Haram, and explore its full potentials to become world class in years to come.
The team, using an inclusive and participatory approach that included a consultative workshop to define the objectives and priorities, came up with a strategic development plan.

Mandara, in her remarks, gave an overview of the plan, which has the slogan: ‘our Borno, our Success’, a document preceded by thorough planning and analysis, with a vision to ensuring that in the next ten years, that is by 2030, Borno transforms the insurgency ravaged society into a peaceful, stable and self-reliant society with over 70% productive population.

However, by 2045, the State hopes to deliver a prosperous society that is a leading regional agri-business and commercial hub that connects and supplies the markets of Central Africa and Northern Africa, reclaiming the glory of Old Borno Empire as the stabilising power in tropical Africa.
The plan is anchored on five critical pillars of Human Capital Development, Leadership in Agriculture, Healthy Citizenry, Sustainable Environment, and Regional Trade Hub for Commerce that will provide jobs and prosperity to the citizens.

Speakers at the launch of the plan, amongst them Ministers of Communication – Pantami, Finance – Zainab, and former Governor Kashim Shettima, took turns to pay glowing tributes to Governor Zulum, recognising his bold vision for Borno.

Shettima asked participants to rise and give Zulum a standing ovation, which was happily done.

Secretary to Borno Government, Usman Jidda Shuwa, and Chief of Staff, Prof. Isa Hussaini Marte, in their separate remarks to welcome, and thank guests, affirmed the commitment of stakeholders at the executive level, to actualising Zulum’s lofty goals for Borno.

The highpoint of the occasion was, however, the unveiling and display of copies of the development plan by the Permanent Secretary, Federal Ministry of Finance, Budget and National Planning, who represented Minister Zainab while she joined via zoom.