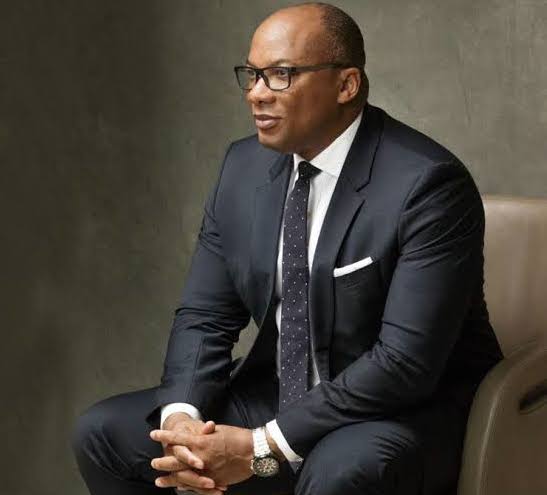 Someone once said that ‘families are like branches on a tree, we grow in different directions, yet our roots remain as one’. For Mitchell Olusegun Elegbe, family has been, and still is, a top priority. The youngest child of his family, Mitchell was born in Benin-City, in the old Mid-Western Region of Nigeria, now Edo State. Unfortunately, he lost his father when he was still in his mother’s womb. Years later, he moved in with his uncle, at Aladja, Delta State, who took responsibility for him and became the father-figure in his life.

There, he had his secondary education before moving to the University of Benin where he studied Electrical/Electronic Engineering. To make ends meet as an undergraduate, Mitchell had several side businesses, including recording songs on audiotapes to sell, and selling shirts.
Through the dint of hard work and resilience, against daunting odds, he hoisted himself above challenges and bottlenecks to eventually emerge from the University of Benin with an honours degree in electrical/electronic engineering.

Upon graduation, Mitchell went for the mandatory National Youth Service Corp (NYSC) scheme, and was posted to Computer Systems Associates (CSA), a software implementation company which connected banks to the Society for Worldwide Interbank Financial Telecommunications (SWIFT).
He got his first job as a Field Engineer in Schlumberger Wireline and Testing, Scotland. After a year, Mitchell returned to Nigeria and started working with Telnet, a fast-growing telecommunications company, where he rose to Group Head for Business Development. After two years, and with the blessing of his employers, he left to start Interswitch and the rest, as they say, is history.

Noble Peace Prize winner, Betty Williams, once said: “There’s no use talking about the problem unless you talk about the solution.” So, Mitchell chose to find solution to the numerous problems associated with payment and money matters in Nigeria, instead of just focusing on these problems.
First of all, Nigerians had to make long and stressful journeys to banks and wait in even longer queues to perform any sort of financial transactions. This meant a lot of time was wasted, leading inevitably to countless missed deadlines. On the other hand, the crime rate was on the rise, as Nigerians had to withdraw large amounts of cash on Friday afternoons, enough to last the entire weekend. This knowledge naturally put criminals on the prowl for victims, knowing that there was always hard cash available in many homes.

Saddened and compelled by this situation, the young Mitchell began his search for solution to the problem.
At the time this idea was budding in Mitchell, he was working with Telnet. So, he proposed the idea of the transaction switch to his then boss and got the blessing to execute it. Sadly, although his plans fell through, but he was turned down by many traditional players, who at that time were not interested in buying the software.
His Plan B was to create an organisation that would utilise the same software to take on this nagging challenge he had identified headlong. With the support of Accenture, a multinational professional services company, Mitchell and his team established Interswitch. This time, they got the buy-in of banks to raise a portion of the start-up capital.

The next challenge was that of getting a competent Chief Executive Officer to steer the affairs of the company. All capable hands were expatriates who expected to earn more than the company’s capital!
In the face of this apparent set-back, the challenge was invariably thrown back to Mitchell, prompting him to take up the gauntlet. As the progenitor of the idea, and with youthful drive on his side, Mitchell fortuitously became the pioneer CEO of Interswitch, just four years after completing NYSC, with relatively limited experience. Supplemented with ferocious zeal, unbridled optimism and unique insights as to where the real problems lay, Mitchell was a “bankable” prospect. The shareholders and the sponsoring company (TELNET) were willing to take the risk and back the relatively young but extremely passionate and motivated team, led by Mitchell and two other like-minded young visionaries, Akeem Lawal (now Interswitch’s DCEO for Payments Processing) and Charles Ifedi.

For him, it was all about building trust and like the Boys’ Scout motto: ‘Be prepared’. He said: “I learnt early that being trustworthy is an important attribute to make it in life. From a rather young age, I have resolved to make the best of every situation I face, knowing that crises will always throw up latent opportunities for the most discerning”.

No doubt, the shareholders were a bit skeptical, largely due to environmental challenges such as ‘how do you run a 24/7 business in a country where electricity is not constant and the telecom infrastructure was still largely unreliable?’. Plus, there was the issue of cultural orientation, especially when the target customers were predominantly already in love with cash.
Mitchell’s outstanding leadership of the company eventually earned him and his team equity in the organisation, and this has grown considerably over the years. Today, Interswitch is unarguably the most successful technology company in Nigeria, with deep roots across Africa. It currently has almost all Nigerian banks and over 11,000 ATMs on its network.

Outside work, Mitchell enjoys mentoring and providing guidance to young entrepreneurs (particularly in the tech and fintech space). Hear him: “Considering my background and experience with building a technology business within an emerging market context, I am able to do this. Also, I am a member of the board of Endeavor Nigeria which is a globally renowned entrepreneurial development initiative. This also helps me give expression to my passion for nurturing young people.”

When he is not mentoring, Mitchell enjoys spending time at the gym. “In recent times, I have found fitness and the gym as a good way to unwind and clear my head. I also relish an eclectic repertoire of music. I love to listen to different genres of music because you know; music is food for the soul. Then, the onset of the COVID-19 experience and the lock-down in its wake also afforded me a very welcome opportunity to spend a great deal of time with my family, perhaps the most extensive unbroken stretch in many years! I have also gotten into a bit of Martial Arts and every now and again, you can catch me practicing some stunts with my youngest son,” he said.

For Mitchell, the family is sacrosanct and consists of his lovely wife, Mercy, and their four children – a set of twin boys, a daughter and another boy. Mitchell and Mercy met in the early ‘90s at the faculty of Engineering at the University of Benin where Mitchell studied Electrical/Electronic Engineering and Mercy studied Chemical Engineering. The Biblical proverb says that ‘he who finds a wife finds a good thing’. So for Mitchell, marrying his wife was one of the best decisions of his life.

Being an equally busy professional, Mrs. Elegbe helps to maintain a healthy home balance by raising their children, while supporting his work.
With both parents as engineers, it would have been expected that the Mitchell children would choose to tread the same career path. However, the young ones have a mind of their own and have literally chosen their own destinies. He said: “My daughter wanted to study Fashion Designing. I spent a lot of time trying to convince her to study Engineering, especially since her mum and I are both engineers. She finally went to study Economics but might still end up practicing Fashion Designing. You know what? It is her choice and we are fine with it. The most important thing is creating an impact, finding happiness and, hopefully, becoming successful.”

It probably is no surprise that creativity runs in his family. Besides being a tech guru, Mitchell is also very fashion-conscious and stylish. For him, looking good is part of the business. He doesn’t just dress up because he intends to follow trends. To be a problem-solver, you must be creative. And creativity is about your personality, culture, your approach to issues; and all these continue even as you get older.
Talking about getting older, Mitchell has over the years, become somewhat disenchanted with successive years of policy failure across sectors of governance and policy in Nigeria (and Africa) – which he believes holds the greatest propensity to drive socio-economic impact if executed right.

Although he currently sits in the private sector where he has made remarkable impact within the African business space, using technology and human capital development as a springboard, which is what fueled the vision that has become ‘Interswitch’ today, he sees an impending evolution of his roles and responsibilities over the next few years towards the forefront of championing public-private sector-driven initiatives, evolving into key policy/advisory/consulting roles supporting government. He is also not ruling out the possibility of getting actively involved in the mainstream of public sector leadership at some point in the future.