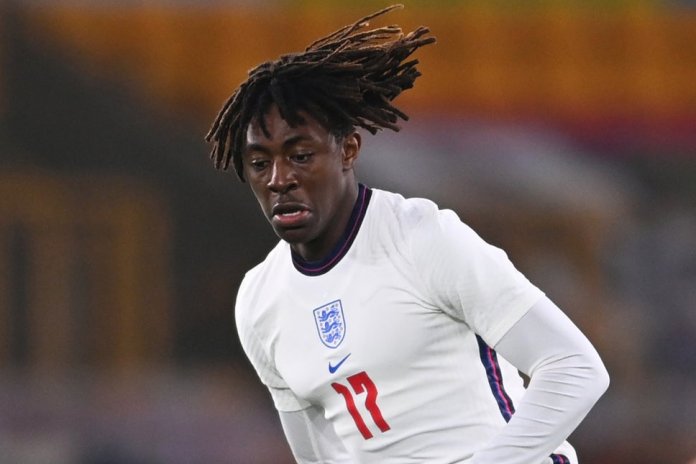 Last year, Nigeria Football Federation (NFF) boss Amaju Pinnick held discussions with Eze over switching his international allegiance and turning out for the Nigeria national team but the player requested to be given time to make his decision as he wanted to focus on his club career.

The 22-year-old played non-binding games for England U-20s before playing competitively for the U-21 squad – earning three caps in total in U-21 EURO qualifiers against Albania, Andorra and Turkey.
Though Eze has hinted that he may decide to represent the Super Eagles, the former Queens Park Rangers playmaker has stressed that he was focused on the England U-21 team at the moment.

In quotes carried by Evening Standard, Eze stated: “I can still play for Nigeria. At the moment, I’m focused on my England Under-21 camp.
“I don’t want to put any type of pressure on myself and try to force anything now.
“I’m focused on the Under-21s, playing for the Under-21s, training, trying to play as many games as I can, and I think that’s the most important thing right now for my development.”

Eze added to his international caps for England U-21s on Friday when they played Andorra in an U-21 Euro qualifier at Molineux Stadium.
Eze, however, said he would not let a potential decision over his international future distract him from progressing.

The Crystal Palace midfielder also qualifies to play for Nigeria through his parents and has trained with the Super Eagles in the past.
Nigeria could look to convince Eze to switch his international allegiance in future, but for now the 22-year-old says he is focused on playing for England.

Eze has been eased into life as a Premier League player by Palace boss Roy Hodgson since his £19.5 million move from QPR over the summer.
But, after he scored his first Palace goal in last Saturday’s 4-1 win over Leeds, Eze says he is learning at a rapid rate under Hodgson.
“At Palace, I’m learning a lot every day,” he said. “You’re put into a position where you have to learn quickly. I feel like I’m doing that, not only from the manager but the players in the team.

“It’s a brilliant opportunity and I’m very grateful. Defensively I’m having to be a lot more aware and playing in two banks of four and being able to cope.
“As a player, that’s not always been in my game, but I’m learning and I’m picking it up.”
Eze has vowed that last Saturday’s stunning free-kick against Leeds is “only the start” for him at Crystal Palace.
“I think it is only the start,” said Eze. “I think we are working hard. I am learning a lot and I am growing as a player.

“That is the most important thing – as long as I keep learning and keep pushing and keep working with the guys around me, and those are people to look at. It is a great opportunity for me.”
Manager Roy Hodgson has been cautious in introducing Eze to the Premier League, but hinted ahead of last weekend that the forward’s chance was fast approaching.

It was just Eze’s third top-flight start, and his manager said it was the perfect time to “unleash” the England U-21 international.
“He has looked at home ever since he arrived, his training sessions have been constantly impressive,” said Hodgson.
“He has also had to be a bit patient because Andros Townsend and Jeff Schlupp are very good players in those positions too.

“It was the right time today to unleash him as it were, he certainly responded and lived up to the expectations that I have of him.”
Asked about the fact that Eagles fans might be hoping to see more of the former QPR man, Hodgson replied: “Once again it’s about competition. Jeff Schlupp isn’t exactly anything other than a very good attacking left-sided midfield player.
“So I had to make choices there. I’ve not been able to fit both in the team together – especially with the form of Andros Townsend on the other side.

“It’s been nothing more complicated than that. But again, like Jairo Riedewald, he has been excellent in training. He’s done really, really well. He’s impressed everybody – not just with his ability but his attitude and professionalism.

“His chance, I’m sure, will come very, very soon.”
Eze was released by Arsenal aged 13 and tried his luck at a series of other clubs but history repeated itself after the academies at Fulham, Reading and Millwall all declined his services.

Having worked part-time in a UK supermarket chain while studying in college, Eze finally saw a subsequent trial at Queen’s Park Rangers lead to a contract. He made his first-team debut six months later and now, four years on, he is playing against Manchester United and Chelsea in the Premier League.

To overcome such a series of setbacks wasn’t easy and Eze admits that he was concerned that his dream might never have come to fruition.
“Of course, you have doubts,” Eze said at England’s training centre at St. George’s Park. “You have doubts in your thinking of whether you’re going to get your professional contract, whether you’re going to be what you hoped you’d be.

“You have to get back up again, not allow your setbacks to determine where you end up in life. You have to keep moving forward. For me, I feel that’s something that was put into me, was forced into me after being released – I had to get up and be strong.

“But for me, it was more the support my family and people around me that continue to instil, that faith in me – and being religious as well.
“Having faith was huge for me, I would always believe that I would get to where I hope to get to and thankfully, and thanks to God, it has worked out.”

Indeed, Super Eagles Manager, Gernot Rohr had made approaches to the Anglo-Nigerian-born midfielder, who is seen as the long-sought successor to Austine Jay Jay Okocha if he eventually chooses to star for Nigeria.

“We have approached him, but not directly. Tunde Adelakun, my assistant, spoke to his mum. What we understand is that there is a lot of pressure on him and Ebere Eze doesn’t want to give an answer now. Obviously, we would love to have him in the Super Eagles, of course! We continue to work on getting him. It may take some time,” Rohr had said.
t ruling out committing his international future to Nigeria