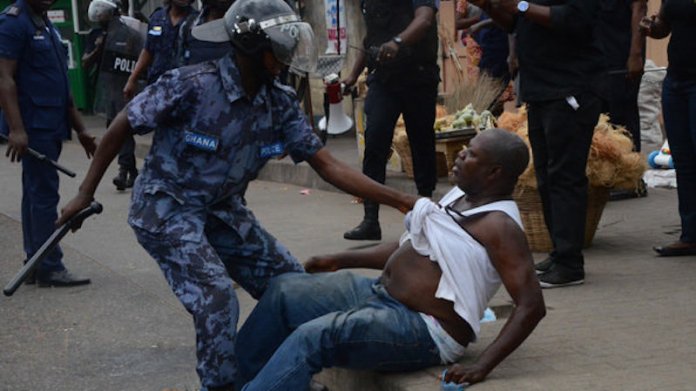 The United Kingdom Government and Parliament, yesterday responded to the #ENDSARS petition by some Nigerians against the federal government, saying it is awaiting the outcome of Nigeria’s investigations into reports of police brutality.

This is coming as the Canadian Government has debunked granting asylum to any Nigerian due to the EndSARS protests.

The deportees, all male arrived the country at 2.30p.m on board a chartered aircraft, Envelope Airline.

Although there were no details about the deportation, but immigration sources said the repatriation was facilitated by the German Embassy and that all the male passengers were deported for various immigration related offences.

With about 219,702 signatures, the petition to UK seeks to implement sanctions against the Nigerian government and officials, over abuse of power by the operatives of the now disbanded Special Anti-Robbery Squad (SARS) and the alleged shooting at protestors calling for SARS disbandment.

Reacting, UK noted that it would not publicly speculate on future sanctions designations but awaits the outcome of the various investigations by the federal government.

The reaction, which came from the Foreign, Commonwealth & Development Office, said the government was deeply concerned by violence during recent protests in Nigeria, which tragically claimed lives.

It offered the country’s condolences and sympathy to the families of all those affected by the protests and violence.

The full response read: “The UK Government is deeply concerned by violence during recent protests in Nigeria, which tragically claimed lives. Our thoughts are with the families of all those affected.

“The Foreign Secretary issued a statement on October 21, calling for an end to the violence and for the Nigerian Government to urgently investigate reports of brutality by its security forces and hold those responsible to account.

“The Minister for Africa tweeted on October 16, noting the Nigerian people’s democratic and peaceful calls for reforms, and again on 21 October, encouraging the Nigerian authorities to restore peace and address concerns over brutality towards civilians. He reiterated these messages when he spoke to Foreign Minister Onyeama on 23 October. The British High Commissioner in Abuja has also raised the protests with representatives of the Nigerian Government and will continue to do so.

“We welcome President Buhari’s decision to disband the Federal Special Anti-Robbery Squad (FSARS) and the establishment of judicial panels of inquiry to investigate alleged incidents of brutality by the security services. They must investigate all incidents, including in Lagos, fully. The Minister for Africa tweeted on 29 October stressing the importance of the police and military’s cooperation with the panels. He raised this, and the need for the panels to urgently start investigations, when he spoke to the Governor of Lagos on 11 November.

“The UK Government will continue to work with the Nigerian Government and international and civil society partners to support justice, accountability and a more responsive policing model in Nigeria. We will continue to push for the Nigerian security services to uphold human rights and the rule of law, investigate all incidents of brutality, illegal detentions and use of excessive force, and hold those responsible to account.

“On 6 July, the Government established the Global Human Rights sanctions regime by laying regulations in Parliament under the Sanctions and Anti-Money Laundering Act 2018. In a statement to Parliament, the Foreign Secretary set out in full the scope of the UK’s new Global Human Rights sanctions regime. He announced the first tranche of designations, as well as the Government’s approach to future designations.

“This sanctions regime will give the UK a powerful new tool to hold to account those involved in serious human rights violations or abuses.

“The sanctions regime is not intended to target individual countries. It will allow for sanctions to be imposed on individuals and entities involved in serious human rights violations or abuses around the world.

“We will continue to consider potential designations under the Global Human Rights sanctions regime. It is longstanding practice not to speculate on future sanctions designations as to do so could reduce the impact of the designations.

“The UK Government will keep all evidence and potential listings under close review.”

Meanwhile, Canada has denied granting asylum to some Nigerians linked to the EndSARS protests, clarifying that it does not grant or receive asylum seekers’ applications directly from individuals but through authorised second and third parties.

This is coming few days after it was reported that Canada granted asylum to DJ Switch, the #EndSARS protester who streamed live the shooting that happened at Lekki Toll gate in Lagos State.

DJ Switch sought the asylum after several attempts on her life after the killing of peaceful #EndSARS protesters in Lekki.

In a series of tweets yesterday on its official Twitter handle, the Canadian High Commission in Nigeria explained that no one could guarantee approval of immigration applications except Canadian migration officers.

The High Commission, which tweeted @CanHCNigeria, said the notice was important in light of “great interest in Canadian immigration programs” received lately.

The Immigration and Refugee Board of Canada had in 2018 reported that Nigeria had more pending refugee protection claims in Canada than any other country globally.

The statement titled, ‘A message from the Government of Canada’, read, “Canadian Embassies, High Commissions, Consulates, Consulates-General or Honorary Consulates do not accept refugee applications directly from people.

“Canada works with the United Nations Refugee Agency, other designated referral organisations and private sponsors to identify individuals in need of resettlement, and who are outside their home country.

“You cannot apply directly for resettlement. You must be referred to Canada by a designated referral organisation or a private sponsor.

“No one can guarantee that your immigration application will be fast-tracked or approved. Only a Canadian migration officer can decide if you can come to Canada.

“All the information you need to apply to visit or immigrate to Canada is available free on the official Government of Canada website.”

Canada is viewed as a global leader with respect to refugee protection.

It has signed the 1951 Convention Relating to the Status of Refugees other human rights instruments which protect refugees.

Canada was the first country to set out guidelines for considering the refugee claims of women, and has taken an active role globally in the resettlement of refugees through both government and private sponsorship programmes.

The UNHCR, the UN Refugee Agency, explained that there are two ways to make an asylum claim in Canada: (1) At an official Port of Entry, or (2) inside Canada at the office of Immigration, Refugees and Citizenship Canada (IRCC).