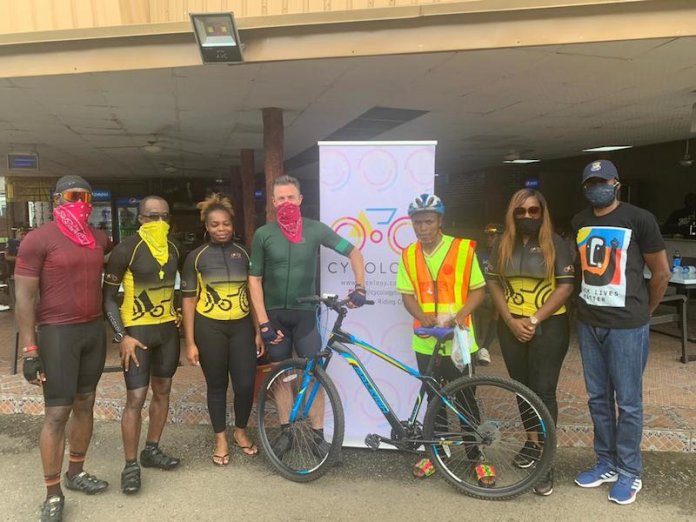 Tuesday September 22, 2020, will remain indelible in the heart of Mr.Sunday Otene. He works as a janitor at African Terminal, Ikoyi.

At about 5 am on that fateful day, while riding on his bicycle to work, he was hit by a hit and run vehicle on Lekki link bridge, where he sustained injuries.

Fortunately help came and he was thereafter taken to Police Hospital, Falomo.

While he was recuperating at the hospital, a not-for-profit organisation; Cycology Riding Club heard about his case and decided to come to aid. Aside ensuring that his hospital bill was settled, it went as far as getting the Lagos State government to track the hit and run vehicle; and also got Otene a new bicycle with protective gears.

Speaking at the brief presentation, the Captain of the club, Mr. Tunde Olaoye told THISDAY that the organisation was touched by Otene’s case.

According to him, “Otene’s case is very important to us. We heard that somebody had been hit at the lekki link bridge and a car driver was trying to avoid paying the toll fees , so he ran through the toll gate and hit Otene who was going to work on his bicycle.

“The ambulance that took him to the hospital was in that area, so we traced him and I spoke to him, asked him how he was.

“We even went as far as getting Lagos State government to track the hit and run vehicle. When members of cycology heard about him that he is a commuter, and that the bicycle he had, was damaged, we decided to come together and get him a new one.”

He said the club, aside cycling every Saturday for leisure, also emback on activities that will impact the society. “We also try to encourage cycling as a means of transportation for commuters as Lagos is congested. If we allow cycling, we can reduce the amount of people driving cars, “he said.

Olaoye emphasised on the Lagos state non-motorised transport policy that would soon be passed into law saying that it will ensure that cyclist on bicycle, can ride on major roads to work.

Asked how safe is it to ride a bicycle on our major roads, the captain said, “The highway code describes road users as motor cyclist, pedestrian and motorists. With the policy that Lagos State government will pass, it will only make the roads safer and that is why we gave Otene a reflective jacket and helmet, so that when he is riding on the road, people can see him.

“With the highway code, anybody can ride a bicycle on the road. Nigeria has become so used to cars which should not be. By the time the policy is passed, it is going to give protection to non-motorised transportation. By then, the roads will be safer, you will start seeing more signs that shows that bicycle are allowed. That is what we are trying to achieve.”

In his reponse, Otene who was full of excitement, thanked the club for its efforts saying, “I owe Cycology a debt which I can never pay. I don’t know them from anywhere, yet they helped me. I thank them for showing their sympathy towards me, I am very grateful.”