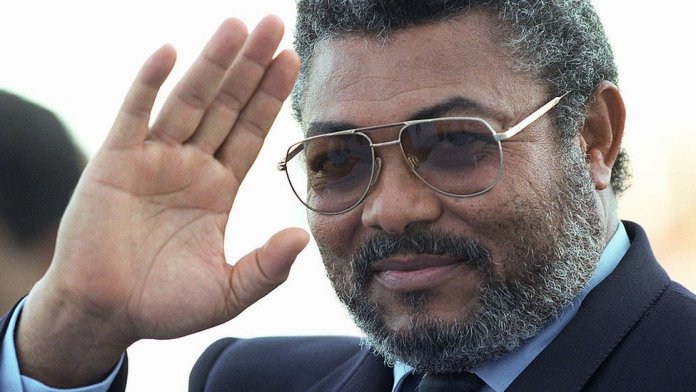 President Muhammadu Buhari; Ghana’s President, Nana Akufo-Addo; President of African Development Bank (AfDB), Dr. Akinwumi Adesina; former President of the Senate, Dr. Bukola Saraki and the Peoples Democratic Party (PDP) were among personages and groups that yesterday condoled with the government and people of Ghana over the passage of their former President, Jerry Rawlings.
Rawlings died earlier yesterday at the Korle-Bu Teaching Hospital in Accra, capital of Ghana, from COVID-19-related complications. He was 73 years old.

Rawlings had buried his mother, Mrs. Victoria Agbotui, at Dzelukope in the Volta Region on October 24, 2020, and fell ill shortly after the burial. He was hospitalised after showing symptoms of COVID-19.
It was gathered that the former president also had underlying illnesses.
A flight lieutenant of the Ghanaian Air Force, Rawlings first staged a military coup as a young revolutionary on May 15, 1979, five weeks before scheduled elections to return the country to civilian rule.

When the coup failed, he was imprisoned, publicly court-martialled and sentenced to death.
From prison, he plotted another coup and took back control of the country on December 31, 1981 and became Chairman of the Provisional National Defence Council (PNDC).
He resigned from the military, founded the National Democratic Congress (NDC), and became the first president of the Fourth Republic in 1992.
He was re-elected in 1996 for four more years.

After two terms in office, the limit according to the Ghanaian constitution, Rawlings endorsed his vice-president, Mr. John Atta Mills, as presidential candidate in 2000.
He was until his death, the African Union envoy to Somalia.
In his condolence message, Buhari, in a statement by his media adviser, Mr. Femi Adesina, said the entire African continent would sorely miss the sterling qualities of the late Ghana’s ex-leader.

The statement said Buhari believed that the passion, discipline and moral strength deployed by the former Ghanaian leader to reposition the country have continued to reverberate across the continent and beyond.
The president commended the unique role played by Rawlings in strengthening political institutions in his country and Africa at large.
According to him, such roles stimulated the economy for sustainable growth, adding that the late Rawlings championed the African cause by urging many leaders to work towards interdependency on the global stage, especially in areas of competitive advantage.

The statement added: “President Buhari joins family, friends and associates of the former Ghanaian leader in mourning his departure, assuring that the ideas that Rawlings postulated, particularly for development in Africa, and his sacrifices in working in various countries as an envoy for peace and democracy will always be remembered.

“The president prays that the almighty God will grant the Ghanaian leader eternal rest, and comfort all his loved ones.”
Akufo-Addo, in a statement, also described Rawlings as a great tree that has fallen and expressed his condolences and sympathies to his family and Ghanaians in general.
He ordered flags around the country to be lowered to half-mast for seven days of national mourning from Friday and said he was suspending campaigning for the upcoming election in December.

“A great tree has fallen, and Ghana is poorer for this loss.
“I have directed all national flags should fly at half-mast for the next seven days in all parts of the country and have declared seven days of national mourning from Friday, November 13 to Friday, November 20,” Akufo-Addo said in a statement.
Adesina also yesterday tweeted that the “passing away of former President Jerry Rawlings, an illustrious son of Africa, who worked tirelessly and passionately for Africa, is very sad.”

He described his death as a big loss to Ghana and Africa.
“My condolences to his dear wife Nana and family and to the Government and people of Ghana,” he tweeted.
The PDP also yesterday commiserated with the government and people of Ghana over the death of Rawlings.
In a statement by the National Publicity Secretary of the party, Mr. Kola Ologbondiyan, the PDP said: “Our party received the news of Jerry Rawlings’ death with rude shock and immense sadness given the roles he was playing to ensure the unity, stability and development of the African sub-region and the continent at large.

“Former President Rawlings was a courageous patriot whose policies repositioned his country to attain greater heights in critical sectors of her national life.”
The PDP said Rawlings was loved not only by Ghanaians but also by Nigerians and the world for his candour, patriotism and quest for development, equity and fairness.

“Our party commiserates with the President of Ghana, His Excellency, Nana Akufo Addo, the widow of Jerry Rawlings, Nana Konadu Agyeman Rawlings, the Rawlings family as well as the people of Ghana and prays God to grant fortitude to the bereaved and eternal rest to the departed leader,” it said.
Saraki has also commiserated with the people and government of Ghana over Rawlings’ death.

In a tweet yesterday, the former Senate president said: “I just got off call with HE (His Excellency), Nana Kufo-Addo of Ghana. On the call, I conveyed my deepest condolences over the passing of the former President of Ghana, HE Jerry Rawlings.”