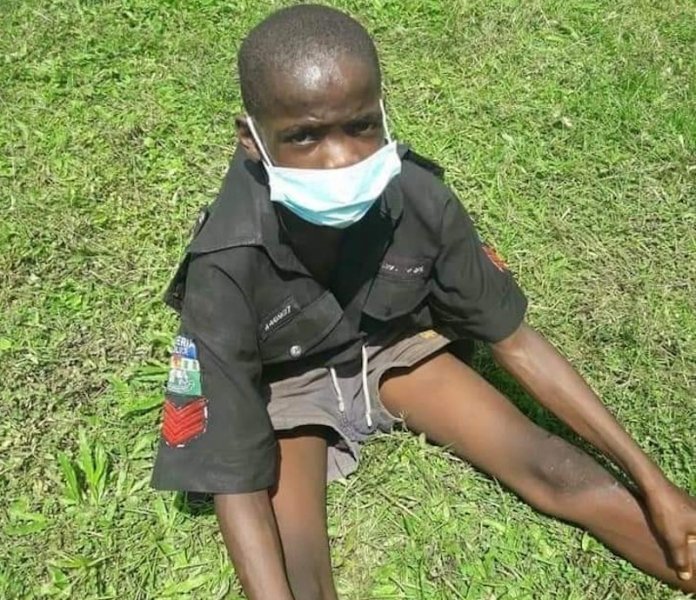 One of the aftermaths of the #EndSARS protest in Edo State was the unnecessary and unlawful parading of an 11-year-old boy among hoodlums and masterminds of the burning and looting of police stations in Benin City, Edo State by the police, writes Adibe Emenyonu

To him, it was fun time especially when some hoodlums hijacked the #EndSARS protest in Benin City, capital of Edo State. As soon as the hijackers succeeded in sacking men of the police force in their stations and began to loot whatever was in sight, Gift Osayuhi, aged 11, went for the police uniforms, hung in one of the offices, wore it and pronounced himself the new Inspector General of Police henceforth.

Gift, as he is fondly called by his peers, has stopped going to school. His classroom was the busy Ring Road (King Square) where he assists his widowed mother to sell sachet water before daily meal is guaranteed.

What a way of life for the teen who at that age has become familiar with jungle life. Therefore, when the hoodlums attacked the Oba Market Police station, within the precint of the Ring Road, he couldn’t help but join the crowd.

Incidentally, this coincided with the time he finished selling the first bag of pure water given to him by his mother to sell. He therefore grabbed the opportunity to join the army of protesters to grab a police uniform as his own palliative and appointed himself the IG, oblivious of the consequences of his action.

Eventually, when the dust died down and the law enforcement agents began a manhunt of those they claimed were involved in the arson and looting, Gift was conspicuously identified and the search for him began until he was arrested.

Gift would have gone scot free but for the video which went viral in the social media that captured him wearing a uniform meant for the “original IG”. But his offence, according to the police authorities when he was paraded alongside other suspects was his involvement in the burning of the police station.

During a brief interview with him after the civil society group secured his release on grounds of being a minor, he said his ambition is to become the Inspector General of Police.

He simply said: “My dream is to become the Inspector General of Police.” Further probe did not elicit any other answer from him. This prompted some member of the public to question the police on the rationale behind apprehending an eleven year old because he was seen wearing a police uniform during the EnSARS protest.

Speaking on the issue, Kola Edopkayi, leader of the Talakawa Parliament, one of the civil society groups in Edo State that secured Gift release, said “We have been able to secure the unconditional release of the 11 year old boy by name Gift Osayuhi whose picture went viral on social media for allegedly joining some miscreants to break into Oba Market Police station, took their police uniform, wore it and declared himself as the new IG of Police during the ENDSARS protest.”

Edokpayi disclosed that boy was released after the parliament made an undertaking to rehabilitate and reform him.

“The young boy said his dream is to become the IG of Police and we also undertook to ensure the boy is giving a proper education so as to help him achieve his dream. We sincerely thank Edo State Commissioner of Police and Edo State Ministry of Justice for the kind understanding and cooperation.

“We also met with his mother who told us she is a widow that takes care of her children alone and the little boy usually assist her to sell water and drinks in Ring Road”, Edokpayi stated.

To make well their undertaking, the civil society group has launched an education endowment fund for Gift Osayuki and his back to school in pursuant of the dream.

As as much as the episode involving the eleven year old appears comic, the legal profession did not take it lightly as they lampooned the police for unlawful detention and infringing on the fundamental human rights of Gift.

The member, Monitoring Committee of the Administration of Criminal Justice Law, Nigeria Bar Association (NBA), Benin, Prince Madojemu is one of those who carpeted the Nigeria Police for parading little Gift alongside other suspected criminals, knowing fully well he is a minor that needed protection.

He said it is not only shameful for the police to parade the 11 year-old child as one of the masterminds of the arsonist attack on one of their stations, but equally actrocious to see how the rights of the child has been violated with this parade vis-a-vis the extant provision of the CHILD RIGHTS ACT.

Madojemu asked, “Can the Edo State Police Command say in certain terms that a well equipped police station famed for its abuse of human rights before the #EndSARS period was sacked, looted and burnt down by an 11 year old child?”

He described as ridiculous and shameful to see 11 year olds chasing trained police personnel out of their own station.

According to him, the Child Rights Act explicitly made provisions for the detention of a perceived child offender and sundry things to be done in respect of the arrested child which Section 212 states as follows:

“Detention pending trial (1) Detention pending trial shall—(a) be used only as a measure of last resort and for the shortest possible period of time;
(b) wherever possible, be replaced by alternative measures, including close supervision, care by and placement with a family or in an educational setting or home.
(2) While in detention, a child shall be given care, protection and all necessary individual assistance, including social, educational, vocational, psychological, medical and physical assistance, that he may require having regard to his age, sex and personality.”

According to him, “The Act also in sections 213 and 214, give directions on how the child should be prosecuted in court including the coverage of his trial and how the prosecution handles the child while being prosecuted for the allege offence. The child should not be treated like an adult that have committed a crime, rather the police should struggle to unravel the reason for the child’s involvement in the crime and other things.

“By the Provisions of Section 211(2) of the child Rights Act, the Act explains that the child should be protected to avoid harm coming to the child. It defines harm to include the use of harsh language, physical violence, exposure to the environment and any consequential physical, psychological or emotional injury or hurt.”

However, the legal practitioner noted that the exposure and parade of this child by the police has actually violated the right of the child and caused him more “harm” than the allege offence he committed.

The parade he further stressed, has caused the child emotional and psychological hurt as he is currently the butt of joke on the internet when he ought to be protected in accordance with the provision of the Child Rights Act.

Madojemu also picked holes on the Nigeria Police Act 2020 which did not outlaw the incidences of parading suspects on television when a court of law has not pronounce them guilty, demanding what happens to the presumptuous of innocence until proven guilty mantra as enshrined in Section 36 of the 1999 Constitution as amended?

His words: “One of the failings of the recently passed Nigeria Police Act, 2020, is it’s failure to outlaw the incidences of parading suspects on television when a competent court of law has not pronounced them guilty. What happens to the presumption of innocence until proven guilty as espoused in Section 36 of the 1999 Constitution (as amended)?

“The courts has repeatedly warned about the dangers of parading suspects for alleged offences committed before their actual trial. What happens when the court discharges and acquits them of the alleged offence? Will they be adequately compensated for the psychological trauma and torture they go through? What about the stigma it brings to them when friends, loved ones and family watch them on television as criminals? But as usual, the Police and other law enforcement agencies, are oblivious of this pronouncements by our Courts. What a Shame!

“It is my respectful opinion that the Nigerian Police Force, Edo State Command should ensure that the Rights of the young “IGP” arrested in connection to the looting and burning of Oba Market Divisional Police station be taken into consideration and well protected while in their custody.

“I think the sanity of the child should be taken into consideration if the police are certain that the child was amongst those that sacked a heavily armed division. If these things are not considered, any charges brought against the child may not see the light of the day. The child should be protected at all times and not be made to form a source of comic relief to the Post #EndSARS era.

“It is wrong to treat children the same way an adult will be treated given the circumstances of a crime being committed. The law protects the child. We should all ensure that the protection accorded the child under the law should be well exercised in favour of the child. Not only has the parents and/or guardians of the child failed the child, the society has equal share in the upbringing of this child. The child needs love and rehabilitation and not social media reprimand and stigmatisation!”