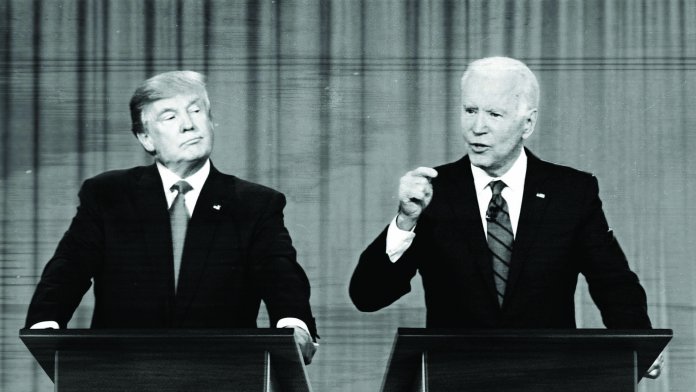 Beyond the fact that the United States President Donald Trump lost his re-election bid to Senator Joe Biden, there are strong undercurrents that cannot be ignored from the process that produced the 46th president of the United States. Bayo Akinloye reports

The United States of America’s 2020 presidential election between incumbent President Donald Trump and former Vice-President Joe Biden is the 59th presidential contest in the country. Five days after the election, a winner was eventually announced. But there are more fireworks, analysts claimed, still in the making.
On November 3, 2020, when asked about an acceptance speech and a concession speech, President Trump replied: “Winning is easy. Losing is never easy. Not for me; it’s not.”

Not a few including his sworn enemies – the Democrats – agreed that the US president was not a conventional politician. Against all seeming odds in 2016, he beat American former First Lady and Secretary of State, Hillary Clinton, to the White House. It was unexpected. But he won.
In the run-up to the 2020 election, various polls projected a wide gulf between him and Biden (with claims that the former vice president was going to win the race with a wide margin). Five days after the election, the projection came to pass as the US has declared Biden winner of the election, even though the race was too close to call.

But before a winner was declared, some analysts claimed Trump had won in defeating the general narrative by some media houses in the US that Biden was going to trump the incumbent.
President Trump is not giving up without a fight as he cast aspersion on the authenticity of votes in some states. On Wednesday, his campaign filed lawsuits in Pennsylvania, Michigan and Georgia, laying the groundwork for contesting battleground states in the hunt for the 270 Electoral College votes needed for reelection.

The new filings, joining existing Republican legal challenges in Pennsylvania and Nevada, demanded better access for campaign observers to locations where ballots were being processed and counted, and raised absentee ballot concerns.
Besides, the incumbent president sought to intervene in a Pennsylvania case at the Supreme Court that dealt with whether ballots received up to three days after the election could be counted.

Many critics thought Trump was deliberately attacking the integrity of the votes, where he thought he would likely lose.
America had been considered by the world in general as the bastion of democracy and tended to urge Trump not to ‘desecrate’ the age-old democratic traditions of the US.
Except for his earlier claim that he had won the presidential race while counting was still ongoing, political observers believed that Trump actually has the right to raise objections where he deemed necessary regarding the voting and counting.

Expectedly, Biden said the count should continue in all states, adding, “No one’s going to take our democracy away from us — not now, not ever.”
In one appeal to a Pennsylvania appellate court, Trump claimed that one of his campaign representatives was prevented from seeing the writing on mail-in ballots being opened and processed in Philadelphia.

A judge in Philadelphia dismissed it, saying poll observers were directed to observe, not audit.
Trump, addressing supporters at the White House on Wednesday, talked about taking the undecided race to the Supreme Court. But there were important differences from 2000 and they already were on display.
In 2000, Republican-controlled Florida was the critical state and Bush clung to a small lead. Democrat Al Gore asked for a recount and the Supreme Court stopped it. To some election law experts, calling for the Supreme Court to intervene at the time he did seemed premature, if not rash.

Yet, the world watched on with bated breath.
According to Ibrahim Al-bakri Nyei, Liberian political analyst and researcher, it has been a long night of uncertainty and anxiety. “We are all following the results to know who’s going to be the next president of the United States, and based on their campaign pledges, we will have some indication about the direction of various aspects of US policy regarding multilateralism, environment, trade, and other high priority issues.

“Voters are torn mostly between the economy and coronavirus response. Some polls suggest that the majority of those, who voted for Trump did so because of his record on the economy, while those who voted for Biden did so in response to Trump’s terrible record in fighting the coronavirus epidemic,” Nyei.
Can anything be learnt from the American electoral debacle?
“Yes,” said Nyei.
“We can elevate policy debates to enable voters to make informed choices and reduce the risks associated with elections fought around tribal and factional divisions. Something is not lost on me. Trump is seeking to exploit the United States’ racial and immigration issues to shape the election in his favour or discredit it entirely.”

The US prides itself on its record of a stable and competitive democracy and the Trump presidency, many agreed, has given analysts a run for their money. Nonetheless the outcome, this election will be recorded as one the most controversial elections in US history, in part because of the constraints imposed by the coronavirus, and in part, because an incumbent tried to turn age-old American politics on its head.
Ousmane Aly Diallo, a researcher for Francophone West Africa, Amnesty International West and Central Africa Regional Office, explained: “Barack Obama famously said in 2009 before the Ghanaian parliament that ‘Africa [did] not need strongmen, it need[ed] strong institutions.’

SEleven years after this seminal speech, it seems that the strength of the American institutions that have been stressed during the last four years was put to a critical test as the electoral results have continued to trickle in [or not].”
President Trump’s speech and action, said Diallo, was not something strange to African politicians, pointing out, “This behavior is not unfamiliar to West Africans. Recently in Guinea, candidates claimed victory before the discredited Electoral Commission’s provisional results. In Côte d’Ivoire, they contested the boycotted polls and proclaimed transitional arrangements.”

Curiously, Trump did not commit to a peaceful transfer of power should he lose to Biden and some believed that even as it seemed like Biden would win, the US standing over the last four years has taken a battering.
According to Mwanahamisi Singano of African Women’s Development and Communication Network, after witnessing and participating in elections in Tanzania, where all state apparatus were deployed to secure a win for president seeking reelection, said, “It is refreshing to see the opposite in United States: the president seeking reelection constantly claiming rigging against him.

“What we are seeing and learning is how deep and engrained extreme right-wing beliefs are embedded in American society and a clear desire and commitment to make those beliefs part of public policies and public life. Americans are not only voting for presidents as individual candidates, they are voting for fundamental issues: human rights, climate change, equality, anti-racism, gender equality, and the list goes on.”

She admitted that the US election “reminds us, one more time, that strong man politics and populist leadership are happening in developed countries, not just the developing world.”
Millions of Africans watched the US elections with a mixture of amazement and apprehension, according to Mehari Taddele Maru of School of Transnational Governance and Migration Policy Centre, European University Institute.

One lesson to be drawn from widespread media speculation about potential degeneration into election dispute and violence in the US is that such outcomes were not confined to Africa, observed Maru.
“Ethiopia’s experiment with democratic constitutional federalism is now heading to a civil war; the governments of democratic countries in Africa, such as Tanzania, are experiencing election-related violence; and other regional powers, whose leaders have appeared to enjoy overwhelming popular support at the beginning of their term, like in Nigeria and Ethiopia, are facing widespread violence and serious challenges to their political legitimacy.
“A significant number of Africans view the possibility of President Trump’s reelection with trepidation, having observed his record of assaults on multilateralism and his attempts to use multilateral organisations such as the World Health Organisation as tools in US domestic power politics,” said Maru.

Many may hate President Trump. But the November 3 election and the results so far suggest that the maverick politician has gained more political fan base, “already getting 5 million more votes than he did in 2016 and scrambling calculations of conventional wisdom by making unexpected inroads with Black and Latino voters.”
Writing on Trump in an article for Politico, Michael Kruse, said: “The last few weeks heading into this election, I pre-reported a pair of stories — one to run if Trump was reelected, another to run if he wasn’t. I called Trump biographers and former staffers and political professionals from both parties.

“The conversations I had for a Trump win? It doesn’t actually matter that it looks like Trump’s going to lose. It’s all still true. He makes it incredibly easy to be for or against him,” said Sam Solovey, a contestant on the first season of ‘The Apprentice.’ “He reduces us to these divisions.
“Lincoln was suited to his time, Washington was suited to his time, and Donald Trump, who doesn’t deserve to be in the same sentence with those two people, was suited to his time,” said Trump biographer, Tim O’Brien.
“And that’s what we have to understand. He is a reflection of us. We have grown so far apart from each other,” he said.