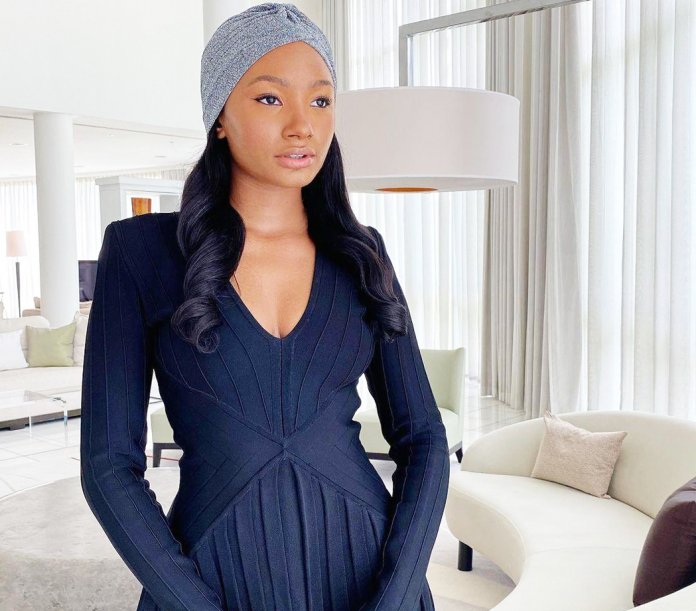 Temi, daughter of billionaire businessman, Femi Otedola was the cynosure of all eyes when Kunle Afolayan’s latest movie, Citation premiered in Lagos last weekend. She played the lead role of ‘Moremi Oluwa’ in the flick. Ferdinand Ekechukwu captures the glitz of the premiere

It was the premier of Kunle Afolayan’s Citation in Lagos last Saturday and Temi Otedola deservedly got a standing ovation for her acting prowess. She played the lead role of ‘Moremi Oluwa’ and many are still struggling to believe it was Temi’s first time in a movie. The pretty young lady played the lead female character alongside other A-list actors of diverse nationalities.

The premiere of Citation was a constellation of stars interspaced with an array of personalities from across sectors. They converged on Terra Kulture, an arts and culture hub in Lagos for the exclusive debut of the flick. It was a packed room of guests with mixed reactions to different scenes from the movie, and words can’t express how priceless these reactions were.

Starting with the red-carpet moment and great conversations, the screening began with the opening by Afolayan who welcomed everyone and appreciated the effort of the cast, crew and the partners involved in Citation.

He also emphasised on the intentions of the movie which is to encourage people to “sorosoke” (speak up) against sexual based crimes. Afolayan added: The Citation, apart from its thematic premise, will attempt to market Cape Verde to Nigerians and the rest of the world while also establishing film and cultural affinity between the two countries.

The screening ended with an ovation as Afolayan came on stage for the curtain call, inviting Dere Awosika, the chairman of Access Bank, alongside him to share her reasons for being a partner in the movie’s production. Stunning everyone present, the director and filmmaker placed a zoom call through to Jimmy Jean-Louis and Adjetey Anang, who were unable to attend the premiere.

Temi tweeted after the premier: “The Citation Premiere!!! I’m so beyond grateful that me and the Citation family finally get to share what we created with the world. Thank you to @kunleafo and everyone who made this dream a reality #CitationTheMovie coming to Netflix this Friday.

Temi, the last of Femi Otedola’s children, is a fashion and travel blogger. She owns JTO Fashion, a multimedia platform from which she expresses her fashion, beauty, art, and travel exploits. Temi, like her two older sisters, Tolani and DJ Cuppy, who have blooming careers in entertainment, also has the backing of her billionaire dad.

Citation tells the story of a 21-year-old female student on a Nigerian campus forced to find a way to deal with an awkward situation of sexual harassment from a male lecturer, Prof. Lucien Nd’yara (Jimmy-Jean Louis). Written by Afolayan’s long-standing business partner, Tunde Babalola, Moremi Oluwa, the fun-loving 21-year-old student eventually drags Nd’yara before the University’s Senate. Subsequent events that unfold eventually pit her world against that of the respected academic, baring the realities that frequently play out in many male-dominated educational environments.

The movie was shot in Nigeria, Senegal and Cape Verde and features tested thespians like Haitian-born Hollywood actor, Jimmy Jean Louis, Sadiq Daba and Gabriel Afolayan with a cameo by Dr. Mrs Ibukun Awosika, the Chairman of First Bank of Nigeria.

Citation debuted on Netflix, a US streaming platform, last Friday. The platform announced the deal in September, alongside three new classic films from the African continent that will join the growing slate of Nigerian content on the streaming platform and shown to 193 million members in 190 countries around the world.

Femi Otedola said: #CitationTheMovie. I’m so proud of my baby daughter @temiotedola starring as Moremi Oluwa in the new Netflix Original movie ‘Citation’!!! The movie is about Sexual Harassment and is surely the best African movie of all time!! Watch it now on Netflix.