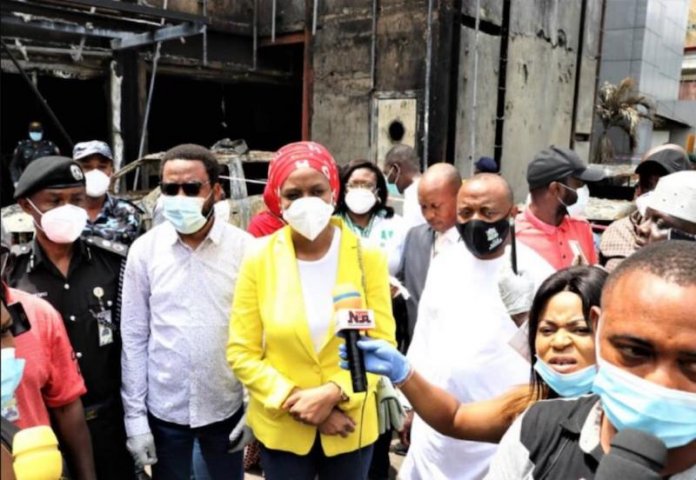 On Saturday, October 3, 2020, a viral message broadcast on social media suggested men of the Special Anti-Robbery Squad (SARS) had gunned down a Nigerian youth, snatched his car, and sped off with it. The person who recorded the video was heard screaming at anyone watching the video to see what had transpired.

As the video spread on Social media, the hashtag #ENDSARS started to garner momentum as more young people demanded an end to the police unit that has for years brutalised young Nigerians.
As a matter of fact, the #EndSARS movement dates back to 2017, where Nigerian youths used the hashtag to share their experiences on violence and assault perpetrated by the defunct SARS. However, the movement only revived in early October, after a video emerged of police officers thought to be members of the SARS unit, allegedly killing an unarmed young man.

This prompted Nigerian youths to troop to Twitter, calling on the federal government for police reform with the hashtag, #EndSARS, #Endpolicebrutality, and many more. The hashtag trended continuously on Twitter as Nigerian youths aired their pain and experiences online.

As a result, Nigerian youths embarked on a peaceful protest tagged #EndSARS to demand the disbandment of the SARS unit, as well as, other reforms in the Nigeria Police Force (NPF). However, what started out as a peaceful demonstration by thousands of youths, degenerated into chaos after the protests were hijacked by hoodlums.
The hijacked protest was then characterised by the heavy presence of security personnel on the streets of Lagos, mob attacks on security personnel, killings, and vandalism of public and private properties.

It took a violent turn following the shooting of unarmed protesters at the Lekki Tollgate. With massive unemployment and economic hardship in the country, restive youths and hooligans seized the opportunity to vent their anger at the elite leading to massive destruction and looting of public and private properties. Across 20 states of the federation, public and private properties worth billions of naira were destroyed. Lagos state, a very important economic hub was the worst hit. THISDAY checks revealed that 62 people were killed nationwide in the protests against the now-dissolved police SARS, which metamorphosed into agitation for improved governance in addition to justice for victims of police brutality. Although official valuation of properties destroyed has not been released, there are estimates that over N1 trillion may be required to rebuild public and private property destroyed by hoodlums in Lagos state alone.

The state Commissioner for Information, Gbenga Omotosho, said 27 of the destroyed BRT vehicles cost $200,000 each, while 57 of them cost $100,000 each, all totalling about N3.9 billion. According to the police, the 25 stations burnt in Lagos are Orile, Amukoko, Layeni, Ilasamaja, Ikotun, Ajah, Igando, Elemoro, Makinde, Onipanu, Ebute Ero, Pen-Cinema, Isokoko, Alade, Cele, Igbo Elerin, Shibiri, Gbagada, Onilekere, Makoko, Daleko, Asahun, Makinyo, Amuwo-Odofin, Anti-Kidnapping, Surulere. Other police stations that were vandalised but not burnt were Ojo, Ojodu, Mowo, PPL and Morogbo.

NPA Count Loses
Latching on the Lekki tollgate shooting on October 20, 2020,hoodlums numbering over 300stormed the head office of the Nigerian Ports Authority (NPA) at 8:42 am on Wednesday October 21, 2020.
The hoodlums were said to have gained access into the premises from the outer Broad Street wing brandishing, daggers, sticks and cutlasses.
After attacking, disarming and chasing the security personnel on duty out of the headquarters premises, the attackers proceeded to burn and vandalise several vehicles belonging to the authority and some members of staff. They thereafter set an entire wing of the office building on fire.

Upon knowledge of the attack, officers of the Nigerian Armed Forces were invited and deployed in the premises. They successfully dispersed the hoodlums and reclaimed possession of the premises following which the NPA’s firemen were able to gain access into the building and put out the raging fire. But before that could be done, serious damage had been done.
Speaking while conducting newsmen around the damaged head office, the Managing Director of the NPA, Hadiza Bala-Usman, stated that though the damage done to the authority’s building was enormous, it didn’t destroy critical information and important documents.

Bala-Usman stated that the damage has not affected the smooth operations of the NPA, adding, however, that it will take years to fix the facilities burnt, given the financial situation of the country.
She said the arsonists originally targeted the port locations in Apapa, Calabar and Tincan Island revealing that it took the combined efforts of the military and other security agencies to repel them.

Stolen Items
She added that a total of 27 vehicles, including cars, utility vehicles, pick-up vans and staff buses were torched while 33 other vehicles, 22 of which belong to members of staff, were vandalised.
“After an assessment of the extent of damage, it was discovered that apart from the annex wing that was burnt, many offices were vandalised, while computers, printers, water dispensers and other electronic devices were looted. A Toyota Prado SUV, a Bajaj motorcycle and one Hilux patrol van were also stolen from the premises.
“All assets of the authority are comprehensively insured and insurers are currently undergoing an assessment of the damages,” she said.

Describing how the event happened, she said: “The attack on the Tincan Island Port commenced at 9:45 am on Tuesday, October 20, 2020. The hoodlums made an attempt to forcibly gain access into the port, attacked the administrative building and set ablaze a truck, which was evacuating cargo. It took the combined effort of officers of the port authority police, the police mobile force and the Nigerian Customs Service (NCS) to repel the attack.

The management of the NPA, she added, is particularly grateful that no life was lost in the incident.
Bala-Usman said: “This is in spite of the fact that some members of staff who were on critical duties were in the building at the time of the attack. The authority recognises the gallantry of men of the Nigerian Armed Forces and our firemen whose intervention restored normalcy.

“We also appreciate the concerns of all stakeholders and citizens who have reached out with kind words of support and encouragement.
“All stakeholders and the general public are hereby assured that the situation has not affected operations of the authority in any way as we have continued to render our services unhindered.”