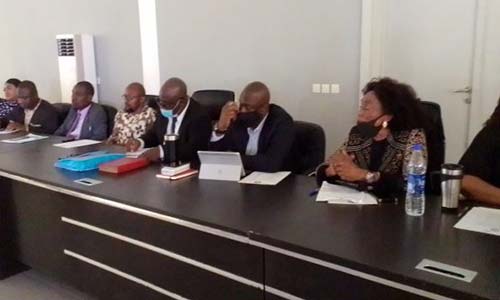 Two of the 27 victims that submitted petitions at the Edo State Judicial Panel of Inquiry for victims of human rights abuses by operatives of the disbanded Special Anti-Robbery Squad (SARS), have testified in Benin City, the state capital.

An officer of the Nigeria Customs Service (NCS), Mr. Isaac Edoh, said he was yet to know if his son, Baba, was dead or alive after brutalisation by policemen in Edo State.

Edoh, an indigene of Benue State, said he saw his son last in the custody of the Edo Police Command in 2011.

He disclosed he was studying English Literature at the Usman Dan Fodio University, Sokoto before SARS operatives arrested him.

The distraught father stated that in June 2011, he received an anonymous call from Edo State Criminal Investigation Department that his son was arrested along the Benin-Auchi Road in Edo for alleged kidnapping.

He noted that he immediately took permission from his superiors in Lagos and rushed to Benin only to find him lying in a pool of blood due to torture and assault by the investigating police officers.

Edoh said: “I tried speaking with my son but the officers on duty prevented me, despite knowing that the suspect in their custody is my son.

“The next day, I visited the police station but I discovered that the name of my son was not on any of the records of the detainees in the cell.

“I immediately contacted the officer in charge of kidnapping section of the police formation, who informed me that my son was not in their custody. I was informed that he was one of the suspects paraded in national television on June 4, 2011.

“I was told that armed robbers struck and shot my son while the police were conducting further investigation in Auchi, Edo North senatorial district but none of the police officers sustained injury.

“The only person they claimed died was my son. Since his acclaimed death, the police have refused to release his body.

“I later filed a suit at the Edo State High Court in Benin for abuse of my son’s fundamental human rights. I got favourable judgment but the police appealed the case on the basis of identity conflict.

“The Court of Appeal urged us to return to the High Court for retrial. Since then, I have been demoralised and I do not know whether my son is alive or dead. All I want is justice.”

The Chairman of the panel, Justice Ada Ehigiamusoe (rtd.), admitted a photograph of the son as well as a Compact Disc (CD) of the paraded suspects and court proceedings as exhibits.

Further hearing in the matter was adjourned till November 17 for a response from the accused police officers.

The second victim, Sunday Akpan, revealed he was repeatedly hit on his ear by a police officer for allegedly selling his wife’s refrigerator and shop to offset the debt.

Akpan, who spoke through his counsel, Mr. Festus Obijeko, stated that he developed hearing impairment after assault by policemen.

Obijeko noted that his client’s condition had made it difficult for him to fend for his family.

The lawyer said: “Akpan was told that the policeman died in the line of duty and that the command would get back to him. That was in February this year. Since that time, police authorities have not got back to him.

“The civil/domestic matter has broken the marriage of Akpan. As I am speaking, Akpan and his wife are not together again.

The chairman of the panel assured the victims of police brutality in Edo state that the members would be fair and thorough in their job while stressing that they would not rely on the account of one party to make their recommendations, but would invite the police to give their own side of the story.

She stated that the panel was not to indict anyone but could only make recommendations to the Edo State Government on how the victims of police brutality could be compensated.

Justice Ehigiamusoe noted that the victims could still come to the office of the panel to make oral petitions while calling on officers and men of Nigeria police to also present their petitions.

editor - December 2, 2021 12:09 am
1
The verdict By Olusegun Adeniyi Governor Sam Ortom is angry with the people of Benue State. And last Saturday, he publicly expressed his feelings at...