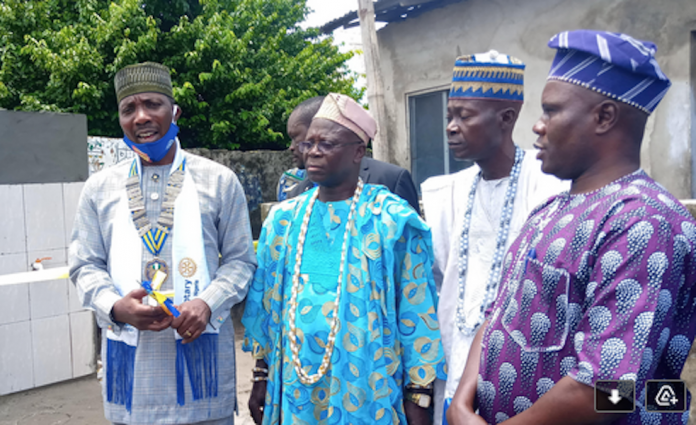 Residents of Ibasa/Ijegun Agboyojoye Community, a riverine settlement, could not contain their joy after Rotary Club of Satellite Town Lagos donated potable water to their community after years of dire thirst.

“I cannot do without thanking my good friend Mr. Joe Vincent who has deemed it fit to recognise me and the good people of lbasa land to bring this project,” he continued.

While further appreciating the commissioning of the water, the Oba accepted the potable water in good faith and prayed, “I pray that God will continue to empower you in every facet of life”.

Commissioning the project at the community, the District Governor, Oyemade, expressed that what Rotary did was simply give opportunity to people that are less privileged to have potable water in their community.

“Most communities in Lagos and Ogun State have been benefitting in various aspect not only water and sanitation but also in basic education, some in child and maternal care and in many other activities,” he said.

As the district governor for district 9110 Nigeria comprising all the clubs in Lagos and Ogun States, Oyemade said what the Rotary Club of Satellite Town will do is visit the borehole water regularly to ensure it is being sustained, maintained and taken care of by the local people.

On how COVID-19 and lockdown affected the club, the district governor said, “For us at Rotary, it has enabled us not to do all the service projects which we would have done regularly so to that extent it has held us down. However, ours is one of the organisations that have not given up in any way.”

He emphasised: “We keep doing stuff for the members of the community. In fact, some clubs gave palliative funds, food and a whole range of things to people in the community. We would have even given more but for the pandemic.”

For the President of Satellite Town, Olomu, the club embarks on sustainable service projects to communities around them.

Seeing that the community has a new Oba, the president added that they approached him to know their challenges; hence the commissioning of the project.

Part of its quest is to promote Rotary awareness to the community so that they “will know that we are existing there and that we are partnering them”, Olomu added.

For Rotary Club Satellite signature project for the year, it will begin surgical treatments on prostrate cancer in collaboration with its district for less privileged communities in Lagos and Ogun States.

“Our district initiated it. So, we are supporting it. It is going to be beneficial to every community in Lagos and Ogun States,” he noted.