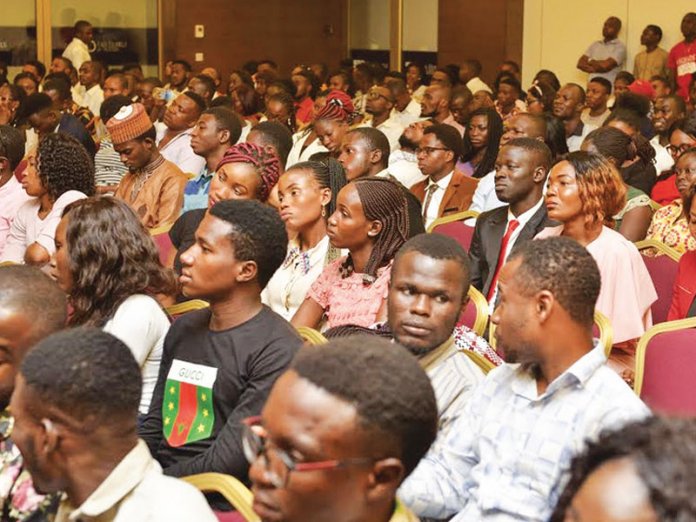 The depiction of Nigerian youths, by Iboro Otu, a businessman and Akwa Ibom State governorship candidate of the Abundant Nigeria Renewal Party in the 2019 election, as new wine-a generation with new ideas-that cannot settle into the mindset of older generations, aptly captures the cataclysm of the EndSARS campaigns

Wine is a product of fermentation after the extraction of grape juice, they bubble and expand as the fermentation gases are released. The science of it includes an exothermic reaction and the giving off of carbon dioxide. As such, in the olden days, it was better to carry wine in leather containers than in glass containers or ceramics. This was because it made its transportation easier to handle without breakage or rupture. Congrurently, the science behind new wineskins is such that they are resilient and expandable, as they are prone to inflate as wine matured. A non-resinated wineskin allows carbon dioxide to penetrate it and escape from the other side, keeping the wine cool and stable. Old wine skins, however, don’t have these resilient qualities. Because of age, they are no longer pliable but brittle and tend to easily burst when they come in contact with new wine. The bubbliness of new wines stresses old skins beyond their limits, ending in rupture of the skin.

And so the question is, is there any point in putting new wine in old wine skin, when the end point is you always end up losing both? New wines belong to new wineskins and old wine to old ones, it was so in the time of Jesus and same to this day.

Rarely can we put new ideas into old mindsets, just as it is impossible in getting new results with old behaviors. With the events of twenty-ten-2020, it should be glaring enough that some of our leaders don’t understand the signs of the times and are rather predictably primitive in reacting to challenges. For example, you only take bullets to wars, you don’t use them on defenseless, non-violent protesting youths carrying out their constitutional rights. Is there a strategy in this I’m yet to get my head around?

The unfortunate situations, which led to needless loss of lives and properties as a result of hoodlums acting in the cover of night and guise of protest are regrettable. This however should have been anticipated by our security operatives, with knowledge of these patterns. When #NADECO #Jagaban or our president, whose political successes were scored as a result of them exercising their right to peaceful protest, were struggling against several ‘injustices’ at various times, they also exposed similar patterns. They, however, are alive today because they weren’t gunned down. Similar to what is happening today, their activities were mirrored by saboteurs which they were quick to renounce and dispel. Like them, we should not get our eyes off the ball.

I condemn in strong terms, the loss of lives, acts of vandalism and destruction in Nigeria and indeed Akwa Ibom State. Acts carried out by paid hands and hoodlums to give the #EndSARS struggle a bad taste. I implore the security operatives to do the needful in swiftly bringing culprits to justice and most importantly, begin immediate investigation of all sources of illicit funding/bribery during the peaceful protest, for indeed, it is the arrival of slush funds from well known and highly publicized quarters that triggered this. The cash-for-hire service attracted vandals and hoodlums to a new avenue to cash out on the backs of legitimate peaceful protesters. The financial inducers, having acquired vast knowledge from experience on how the masses fight and scramble for money thrown down like manna from high heavens, knowingly setup the power-keg; crystallizing all the negative ills and energy we see today, all in their bid to change the narrative and redirect the conversation to their benefit. The spotlight should be on them. Their evil strategy will not work this time around.

About one month ago, myself and other CLO organizations and political parties in Akwa Ibom State had planned our activities for this period of LGA elections in the state. Many of our political parties have been unjustly excluded from the exercise as a result of several missteps of #AKISIEC, the state electoral body. We have written to them, the state government and have challenged them in court in our bid to get a level playing field. The elections, which is supposed to hold in a week, have laid bare the level of unpreparedness of the electoral body in containing its several challenges. We call for good governance in Akwa Ibom state.

We cannot allow certain non-democratic actors escape through the back door by utilizing an old trick from their playbook; creating a distraction to redirect conversation. Our legitimate concerns remain that our democracy is under threat in Nigeria and especially in Akwa Ibom state.

When leadership at councilorship and chairmanship levels are sold to highest bidders as it is with the new rules of engagement set by #AKISIEC – in the form of revenue generation, it totally destroys the rewards and little democratic gains made over the years. It breeds nepotism, cryonism, favoritism and impunity. This is a crime against humanity.

Youth, like new wine, are products of ‘fermentation’ of ideas and vision. The reality is that present Nigerian youths are bursting new wines and for decades, have been held back by leaders who have been doing business as usual; trying to squeeze them into old wineskins, a scientific impossibility that always ends both in rupture of skins and waste of wine; like the event we all witnessed on twenty-ten-2020.

The United States Ambassador to Nigeria, Counselor T. Ulrich Brechbuhl, met today with our Vice President Professor Yemi Osinbajo. The conversation was on America’s concerns about the ongoing violence in Nigeria, human right violations and citizens rights to peaceful demonstration. They also discussed modalities for accountability and justice for victims during this period and beyond. If there is anything to take from this, it is the fact that it further goes to show that our concerns have been registered globally, thus, our need to move unto the next level; negotiations and political participation. We can do both.

The judicial panel of inquiry on police brutality has begun in Akwa Ibom State. To show sincerity of purpose, we call on the state government to immediately constitute other panels to look into even more pressing issues of youth unemployment and youth participation in decision making at all levels of governance. Those should be a great start.