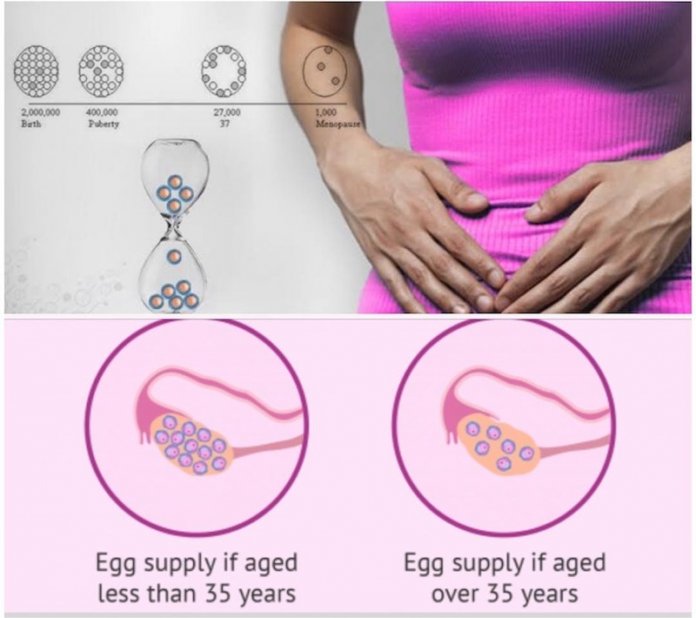 Last week we began the topic diminished ovarian reserve , this week we will be concluding with how can we measure a woman’s ovarian reserve,tests involved ,impact on infertility and its management

HOW CAN WE MEASURE A WOMAN’S OVARIAN RESERVE? : Anti-Müllerian hormone (AMH) is another test that can be done to measure a woman’s ovarian reserve. AMH is the protein made by the cells that surround each egg. The level of AMH in a woman’s blood is stable throughout the menstrual cycle henceyour blood can be taken at any point in your cycle for your AMH test. There are standard AMH levels for different age groups, and like your number of eggs, your amount of this protein will also decline as you age. That makes it a good indicator of fertility when considered along with the other tests.

• Difficulty getting pregnant: due to poor quality eggs, which may fail to fertilize and even when they fertilize may fail to undergo normal embryo development and implantation thus making achieving pregnancy almost impossible.

• High risk for recurrent miscarriages: the process by which eggs grow and mature in our ovaries is called folliculogenesis. This process allows eggs to drastically grow in size and start producing energy which enables it separate and produce copies of chromosomes. If this process goes wrong which often happens in women with diminished ovarian reserve abnormal chromosomes would be formed. Poor egg quality with chromosomal abnormalities eventually develops into an embryo and fetus with chromosomal abnormalities with little or no chance of surviving.

HOW IS DIMINISHED OVARIAN RESERVE TREATED?

The approach to treatment in women with DOR depends on the severity. Time is a great factor in the management. Early diagnosis and treatment may increase your chance of being able to have your own genetic offspring.

Ovarian simulation is usually the quickest and most reliable treatment option.

Other treatment Options that may be explored includes:
▪ Ovulation induction with timed intercourse or Intra uterine insemination
▪ In vitro Fertilization (IVF) with PGT-A, PGT-M, PGT-SR

In some cases of diminished ovarian reserve IVF may remain the only available treatment option. Individualized treatment is tailored for their ovarian reserve. This often means that higher doses of stimulation medication may be used in protocols specifically adapted to the patient.

Women who are undergoing IVF with own eggs and using certain prenatal vitamins and anti-oxidants such as coenzyme 10 (CoQ10)4 , melatonin, N-acetylcysteine, L-arginine, myo-Inositol, D-Chiroinositol, Carnitine, selenium, Vitamin E, Vitamin B complex, Vitamin D plus calcium, omega 3 polyunsaturated fatty acid, haveincreased chance for higher pregnancy rate and live birth as compared to women who did not.

Preimplantation Genetic Testing (PGT): embryos obtained from the IVF process may be subjected to genetic screening; this is a high technology in reproduction. It entails obtaining cells from the embryos on day 3 or day 5 of culturing. Embryos with genetic defect are identified and sorted. Genetically normal best quality embryos are transferred back to the womb. This process helps to prevent certain genetic diseases or disorder from being passed to the offspring, which subsequently improvespregnancy rate as well as life birth.

Some women with DOR may be left with the option of IVF using donor eggs as they may respond very poorly to ovarian stimulation even with very high doses of stimulation injections. In some cases, eggs retrieved following ovarian stimulation may not be able to fertilize,implant or progress to fetus. Hence your physician may counsel for the use of donor egg so as to improve your chance of a life birth.

One of the predominant reasons why most women are not comfortable with the use of donor egg is the fact that resulting offspring may not look like the mother or may have some diseases. Although the resulting off spring does not have the same genetic make-up as the recipient mother, proper IVF centers usually ensures that donors are matched to the recipient by strict criteria’s such as: physical appearance ,race, skin color, height, , blood group and genotype etc. Egg donors must be properly screened to ensure they do not have any infection or genetic abnormalities that may be transferred to their offspring. It is also reassuring that when the husband’ssperm is used the resulting offspring also has a fair chance of resemblance to their genetic fathers.

Recent Studies have shown that about 10% of women seeking fertility treatment have diminished ovarian reserve which simply put means that they have decreased number and quality of eggs as compared to other women of similar age.

Fertility profiling can help you identify if you fall within this 10% of population ,and with proper management and treatment, it is possible for your dream babies to be achieved despite the diagnosis of diminished ovarian reserve.