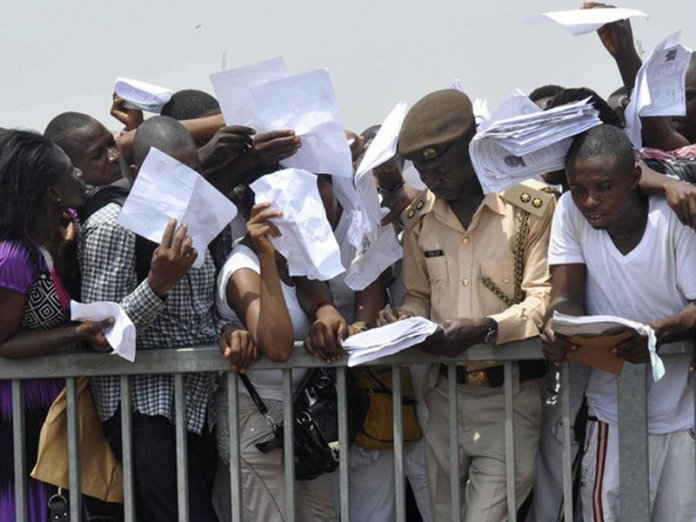 Recent developments in the country have shown that Nigeria is sitting on a keg of gun powder. From the civil unrest in some parts of the country in the wake of the shooting of some protesters at Lekki, Lagos State as well as the raiding of warehouses where Covid-19 palliatives were kept in some states in the country, are all reflection of the high youth unemployment in the country.

Indeed, with unemployment rate in the country as of the second quarter of 2020 at 27.1 per cent, according to the National Bureau of Statistics (NBS), this meant that more than 22 million Nigerians are presently unemployed. This is even more worrying seeing that the NBS figures also showed that as of the second quarter 2020, unemployment rate among young people (15-34years) was 34.9 per cent, higher than the 29.7 per cent it was as of the third quarter of 2018.

Therefore, there is need for more attention to be given to the menace in order to save the country from potential danger.

Clearly, the rising cases of social vices in the country would reduce significantly if a lot of the able bodied young men in Lagos, Port Harcourt, Kano, Kaduna, Owerri, Ado-Ekiti, and other cities in the country are able to get jobs or are engaged in various forms of vocational jobs. Indeed, not being able to get job month after month, year after year, destroys the self-worth of an individual.
Some have also argued that for Nigeria, its high rate of youth unemployment is a major threat to its national security.

Afolabi Oluwaseun, in a scholarly paper titled: “The Rate of Youth Unemployment and Its Effects on National Security,” argued that because of the level of unemployment, a lot of unemployed youth in the country have become instrument of evil in the hands of the politicians in perpetuating their hidden agenda before, during and after the election.

He cited an example with the 2011 presidential election, where over 500 lives were lost including nine youth corp members and thousands of lives and properties were displaced mostly in the northern part of the country.

In addition, many ethno-religious crises were perpetuated by the youth.

Therefore, the high level of crime rate weakens the national security of the country which poses threat to lives and properties, he noted.

Oluwaseun, pointed out that the Arab Spring was carried out by restive youths who were frustrated by the way their countries were governed.

“What is the likelihood that such revolution cannot be carried out by the teeming youth of the country? In addition, we need to recall the role of the restive youth in the Niger/Delta region before the declaration of amnesty by the federal government. “These youths constituted a menace in the society by terrorising and kidnapping oil workers and foreigners to demand for huge ransoms.

“Many lives and property were lost during the period of their restiveness. Currently, kidnapping is the latest self-employment unemployed youth are engaged in.

“Several politicians, actors/actresses, young ones, aged etc. have been victims in the hand of kidnappers. Despite several arrests carried out by the police, the business of kidnapping keeps flourishing every day.”
He noted further than many youth have turned themselves to “area boys” engaging in nefarious activities and a ready evil instrument for the politicians during political activities.

In addition, the rise of insurgent groups as well as frequent cases of ethno-religious crisis was also attributed to high youth unemployment in the country.

“Nigeria is the second largest economy in Africa yet the effect of unemployment tells on the economic growth.

“The youth that are supposed to be productive agents of the economy and be the greatest assets in terms of human resources are still dependent on their parents, relatives or friends.

“Therefore, the government needs to devise policies that will stimulate economic growth that would increase human capital development and productivity output.”

Some experts have advised the federal and state governments to implement policies that would address the unfortunate situation.

To the Founder, Foundation for Economic Research and Training, Prof. Akpan Ekpo, the recent social unrest in Lagos State and some other parts of the country was fuelled by the high level of youth unemployment.

“But the government has over the years been paying lip service to it.

Now, it has exploded. Destruction in one or two weeks can take more than a year to recover. It all goes to show bad governance,” Ekpo, who is a former Director General, West African Institute for Financial and Economic Management (WAIFEM), said.

“Government should increase its expenditure. The expenditure we are talking about here is not for white elephant projects, but expenditure to productive sectors and those that can bring about the desired returns.”
Furthermore, he advised the government to initiate capacity building and training programmes for youths in the country.

In his contribution, former Governor of the Central Bank of Nigeria (CBN), Prof. Charles Soludo, urged the federal government to allow the youth to be at the fore in making and implementing policies for the country.

Soludo said this in an article he wrote regarding the uprising by the youth against police brutality and the call for better governance.

Soludo asked the federal government to “exploit the opportunity inherent in the current seeming national tragedy” by establishing a structure managed by the youth and one that would address their challenges.

This structure, he suggested, could be “Commission for the Future of Nigerian Youths”.

“Let Nigeria lead Africa in this regard by elevating the voice of the citizen to statecraft. We need their alternative blueprint for our future. If they want to suggest their own version of Nigerian constitution, let them do so. It is their future and that of their children that is mostly at stake and so, let’s hear them.

“Let the Commission for the Future of Nigerian Youths produce the youths’ agenda for security, jobs, poverty reduction and prosperity, as well as the legal-institutional- governance structure to deliver them. What kind of education and value system will underpin these and how will they emerge, etc?

He also said the younger generation should be heard, adding that they “might give Nigeria the magic wand for the problems”.

Oluwaseun, also pointed out that entrepreneurship education is not only a means to foster self-employment among young Nigerians, but also to equip them with the right skills, discipline and creativity, necessary to cope with the uncertain employment paths in today’s societies.

To create or develop an enterprise culture, it is crucial that young people have an, entrepreneurial mindset.

“There should be provision and access to soft loans by government and private bodies with little or no interest rate.

“There should be eligibility criteria for giving out loans to unemployed youths such as having a business plan, demonstrating commitment and responsibility, having reasonable equity participation and demonstrating an ability to repay the loan required.

“Thus, government should implement policies so as to bring about good governance in the country,” he added.

Notably, there is need for the government to ensure that it achieves inclusive economic growth so as not to run the risk of increased instability.