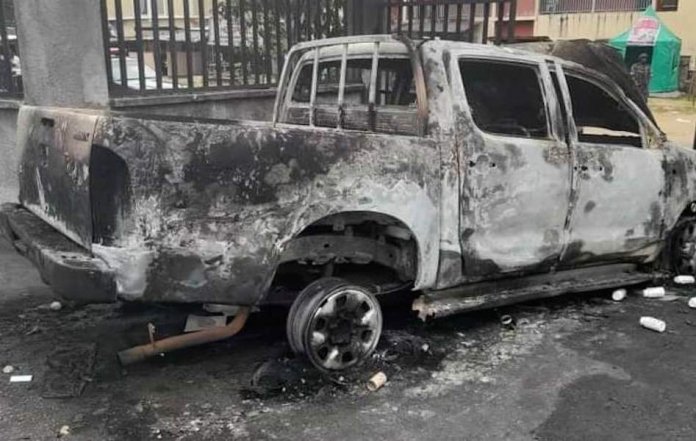 Akwa Ibom State Commissioner for Information and Strategy, Comrade Ini Ememobong, has reiterated that there would be no hiding place for hoodlums disguising under whatever cover to perpetuate arson and other heinous crimes against the peace loving citizens of the state.

The Commissioner said this while speaking to newsmen recently in Uyo, the state capital. He warned that anybody caught disturbing the prevailing peaceful atmosphere in the state would be dealt with using the instrumentality of the law.

While condemning the incident of last Thursday in the state, he said that the Akwa Ibom State Government seriously frowned on its occurrence and has vowed to bring the perpetrators to book.

The State Spokesman who regretted that the #EndSARS Protest which began as a peaceful march by the youths across the country was later hijacked by thugs and hoodlums with the sole aim of reigning terror on innocent citizens, also asserted that the Akwa State Government was committed in its efforts to defend its citizens against any form of security threats at all times.

The Information commissioner further noted that vandalism and looting of properties of innocent and hard working citizens were alien to the people of Akwa Ibom, therefore such acts do not represent who and what the people and the state stands for. He called on the residents to volunteer useful information that could be harnessed as Intel for the appropriate authorities.

While urging the citizens to go about their legitimate businesses with vigilance, Comrade Ememobong also assured that the state Governor, Mr. Udom Emmanuel was doing everything possible to ensure peace and security, thus no part of the state would be ceded to aliens and hoodlums.

The State Information helmsman also used the opportunity to inform newsmen that several arrests had so far been made in connection with the carnage by the Akwa Ibom State Police Commad. He also stated that a lot of the looted items had also been recovered, and assured that more recoveries would by made in the coming days.

Ememobong lauded the efforts of the hierarchy and officers of the Nigerian police Force in the state for their prompt and swift responses to the occasion, as well as their dedication to the restoration of law and order. He expressed optimism that the Command would continue to expand its dragnets in order to make more recoveries.

Akwa Ibom State Government had earkier in a press release signed by the Commissioner for Information and Strategy, Comrade Ini Ememobong imposed a statewide curfew between the hours of 8:pm and 7:am daily, which is still in force till further notice in order to forestall a recurrence of the last incident in the state.