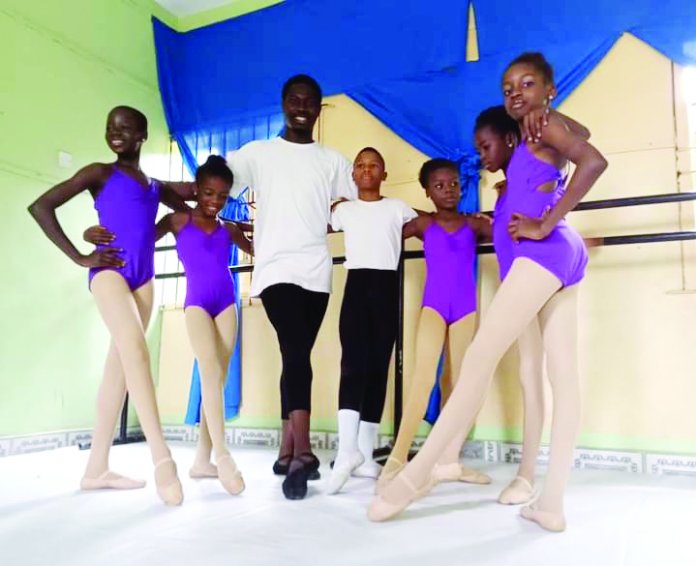 A recent video, featuring some of Daniel Awoseni Ajala’s young ballet students, expresses support for the nationwide anti-police brutality protests and returns him to the dance community’s consciousness, months after a viral video of one of his students dancing barefoot in the rain, Okechukwu Uwaezuoke reports

There are six very young ballet dancers, one of whom is male. They are at first spread out in different positions against the backdrop of a grimy wall. Graffitied on this wall, which is obviously the back wall of the outhouse facing a half-concealed unpainted two-storey building, are the words: POST NO BILLS. The dancers, who are all the students of the Lagos-based Leap of Dance Academy, are well-positioned for a choreographed performance.

Consider the sandy side street, on which they are standing, as their stage. Standing downstage right and left are two dancers draped with emerald green-coloured sheets with the raised fist salute reminiscent of the Black Power Movement. At the centre stage, one similarly poised dancer, draped with a white sheet, backs the audience while another, behind her at the downstage centre, also backs the audience. At the upstage right and left, the remaining female dancer stands with the only male.

The sextet stirs to life, as the Nigerian gospel singer Victoria Orenze’s mournful voice, singing her recent song “My Nigeria”, begins to float towards them. They spread out, close up again, then twirl, unfurl the sheets which evoke the Nigerian Green-White-Green colours, jumping, swaying and eventually exulting in taichi-like movements according to the script…
A voice-over in the video calls out intermittently: “Amen” and “Glory be to God!” It is the voice of Daniel Owoseni Ajala, who scripted and directed the performance titled, “A New Nigeria”. It is his academy’s nod to the zeitgeist, in solidarity with the nationwide protests against police brutality, better known by its social media hashtag #EndSARS.

Ajala, a self-taught ballet instructor, became enthralled by the dance form after watching the 2001 American teen dance film, Save the Last Dance. “There were other dance forms in the movie, but there was something about ballet that captivated me,” he says. “I had this feeling that was experiential, that words cannot explain.”

It was on September 9, 2017, that the Lagos State University graduate thought he had become proficient enough in the dance form to impart it on others. This was when he founded the ballet school in the less-privileged Lagos mainland neighbourhood Ajangbadi. “I felt that I needed to give back to the society, to enable others to benefit from something as special as this,” he recalls.

Besides being a certified acrobatic arts teacher and compliant with the National Training Curriculum of the American Ballet Theatre School, he also became an Alixa Flexibility Certified teacher.
On why the Leap of Dance Academy charges no tuition fees, he explains that the institution was established to provide the neighbourhood children with the opportunity he never had as a child. “I didn’t want any child to give that as an excuse for not attending the school, so I made the Academy free for all,” he explains.

He had to establish the dance school in the neighbourhood because it was within a walking distance from his home. “I believe in the forward integration approach,” he adds. “Situate your firm close to the resources. Besides, ballet needs a lot of close monitoring and the kids need to train very intensively to meet up with the international dance standards.”

His initial efforts were greeted with misgivings in some quarters. Many considered this strange dance form un-Christian because it required the girls to expose too much of their bodies and the boys to wear tight leggings. Over time, the parents of the children became more and more accommodating to the point of accepting it and extending their goodwill to the school. Of course, it helped that Ajala was well-known in the area.

Nonetheless, there were a few challenges that popped up here and there at the initial stage. Besides the fact that the dance form was virtually unknown in the neighbourhood, getting a space with the right floor for the ballet was not easy. “I knew that the floor had to be right for ballet, but we progressed with or without the facilities which did not deflate our enthusiasm for a quality-above-quantity dance education.”

The school is currently being accommodated in a rent-free space, graciously donated by one Mrs Arogundade, the proprietress of Robis Children’s School where Ajala had his primary education. It is located in the relatively calm Afromedia area of the high-density Ajangbadi neighbourhood, which offers a very beautiful environment for training children. “This is a blessing I will always cherish since she has allowed us to use this space for three years without collecting a dime from us.”

Among what Ajala cites as the highpoints of his experience as a ballet teacher since he established the school was getting his students to dance en pointe, a feat that is uncommon in Nigeria. In ballet, a dancer is said to be en pointe when his or her body weight is supported on the tip of fully extended vertical feet within what is known as pointe shoes. He is especially proud about the fact that Leap of Dance Academy is one of the only two dance schools in Nigeria – the other being Kingdom Ballet Company in Benin City – that teaches ballet up to the pointe level.

Ajala’s laudable, albeit modest, efforts first caught media attention when a video of one of his students, Anthony Mmesoma Madu, pirouetting in the rain on a concrete floor went viral in the social media. Since then, his school has been overwhelmed by a media blitz. Besides him, there are other promising students in the school, who share the same commitment.

“I don’t teach my students only to become dancers, but to take a form of discipline through art that can help transform and make them relevant,” he writes in a recent Facebook post. “Whether they end up as professional dancers or dance enthusiasts, the message [would have] been passed.”
In the dance community, he virtually isolates himself because he does not belong to the Guild of Nigerian Dancers (GOND) or its kindred organisations. Since none of them is focussed on ballet, he believes belonging to any of them would be benefitial neither to his school nor to his vision. The first among the local dance schools he currently looks up to are the Benin City-based Kingdom Ballet Company, where he first saw quality ballet teaching. “I have always been inspired by them and am so happy to have visited them on some occasions during their recitals.”

He also draws great inspiration from the efforts of Lovette’s Bits Dance Company, which is based in the Lagos mainland neighbourhood Gbagada and Above Ballet Company, which has had dance classes for adults.