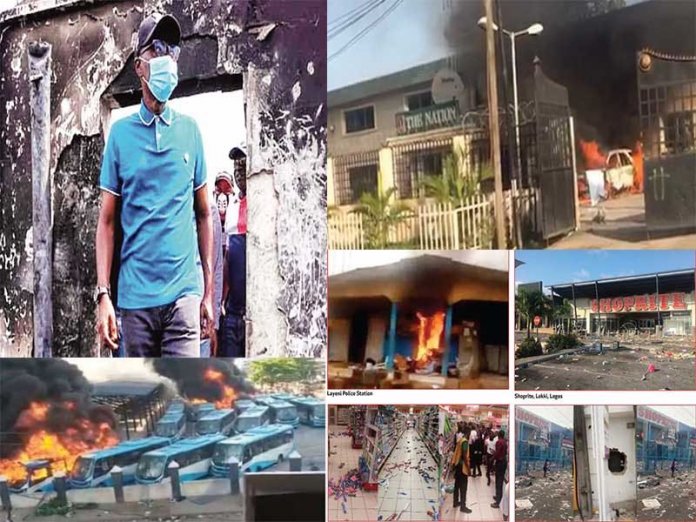 Lagosians are still counting their losses after buildings, cars and other property were destroyed by hoodlums who cashed in on the EndSARS protest, writes Festus Akanbi

What started as a peaceful nationwide protest against the excesses of the recently disbanded Special Anti-Robbery Squad (SARS) by youths took a twist in Lagos on Tuesday, when a group of yet to be identified soldiers opened fire to disperse them at the Lekki Toll Gate, one of the spots for their protests in Lagos.

The spontaneous condemnation and the allegation of the complicity of some Lagos politicians provided the trigger for miscreants to set many public buildings ablaze in the city.

Observers noted that the reign of terror unleashed in Lagos festered because the police were confused as to the appropriateness of their intervention, having lost the trust of the people through the high-handedness of some members of SARS.

As the various cells of the Lagos miscreants fanned out to different parts of the state to cause chaos, in what looked like a festival of fire, members of the public alleged that the police practically took a back seat, leading to the burning down of places like police stations and other facilities.

Lagoon Hospital
Suspected hoodlums on Tuesday afternoon vent their anger on a health facility owned by Lagoon Hospitals in the Apapa area of Lagos State.
It was gathered that a victim with fresh gunshot wounds was dumped in front of the hospital building by an unknown person.
The hoodlums thereafter accused the hospital management of abandoning the male victim without providing treatment for him. They went on a rampage and vandalised the hospital facility. In a viral video, a bonfire was seen in front of the hospital building while huge plumes of smoke billowed into the sky around the facility.
Lagoon Hospitals confirmed the development in a statement signed by its Chief Executive Officer, Dr. Jimi Coker but denied that it refused to attend to the victim.

Ajeromi Ifelodun Secretariat
The secretariat was a target of attacks by Lagos urchins, popularly called ‘area boys’ who carted away some valuable property including cars and air conditioner. Other private medical and commercial buildings in the area were not spared either.

Shoprite, Lekki, Surulere
The Sangotedo branch of Shoprite, a popular shopping mall along Lekki-Epe Expressway was not spared by thugs who ravaged the business premises. Videos of miscreants making their ways into the malls were shared as early as 11am on Wednesday. All the sections of the halls were vandalised as they hurriedly carted away whatever their hands could touch. Similar vandalism was recorded in the Surulere area of Lagos, where criminals from Orile were said to have had a field day robbing the Shoprite, Spar and other business premises in the area.

Banks, Secretariat and Medical centre
Between Monday and Tuesday, hoodlums broke into three new generation banks in the Lekki-Ajah areas of Lagos. Some of them were said to have attempted to break into the bank vaults although the affected institutions are yet to disclose how much was carted away during the raid.

Nigerian Ports Authority
On Wednesday, suspected hoodlums invaded the premises of Lagos headquarters of the Nigerian Ports, chased out the workers before setting the facilities on fire.
The thugs also attacked the NPA facility in Dockyard, Apapa and carted away valuable items. All vehicles in the premises were also burnt down during the raid.

Oba of Lagos Palace
Another set of rampaging mob unleashed mayhem at the palace of the Oba of Lagos, Rilwan Akiolu, who had to be ferried away by soldiers drafted to the palace. In what looked like an invasion, a video shared on social media on Wednesday, show the Oba’s staff of office, regarded as the symbol of authority being taken away by youths who turned against him after burning down the Ebute Ero police post in Idumota. The invaders also took their time in the swimming pool inside the palace.

COVID-19 Palliatives Looted
Dozens of miscreants in Lagos, on Thursday, began carting away food items stacked in a warehouse at Benster Crescent, in Monkey Village, Maza maza, in Amuwo Odofin. The food items, which were labelled ‘cacovid, not for sale,’ include bags of rice, macaroni, spaghetti, salt, garri, sugar and cartons of noodles.

Federal Road Safety Commission office, Ojodu
On Wednesday, some hoodlums turned their attention to the offices of the Federal Road Safety Commission (FRSC) and Vehicle Inspection Unit at the Ojodu area of the state, which they set ablaze.
Eyewitnesses said over 30 vehicles parked inside the premises were burnt. Most of the vehicles were those seized by the traffic management agencies.

BRT Buses Burnt
Also, on Wednesday, some new buses belonging to the Bus Rapid Transport (BRT) were torched by hoodlums who invaded the terminus in Oyingbo area of Lagos, where the buses were parked.
Similarly, more than 40 BRT Bus at Ojodu Berger Terminal were set ablaze early in the early hours of the day.

Governor Sanwo-Olu’s family house
Miscreants also descended on the family home of the Lagos State Governor, Babajide Sanwo-Olu, on Omididun Street, Lagos, throwing stones at the house before it went up in flames.
Eyewitnesses said that one of the youths holding a jerry can was seen soaking the house in petrol but was quickly stopped by residents for fear that the fire could spread uncontrollably. Moments after, however, the youths succeeded in burning the house. It was learnt that policemen attached to the Adeniji Adele Police Station had to race to the scene in a bid to quell the violence.

Ethnic Battle in Fagba area of Lagos
There were also reports of unrest in Fagba community of Ifako Ijaiye Local Government Area, Lagos State on Wednesday in an ethnic clash between Hausa and Yoruba youths. Residents fled to safety as the hoodlums engaged each other with dangerous weapons. The fight continued till Friday when it spread to Agbado Crossing area, with residents fleeing to Ope Ilu and Matogun areas of Ogun State for safety.
In a viral video on social media, as miscreants went on rampage, trucks were set on fire. A petrol station was also burnt. Residents calling for security operatives’ intervention lamented that the absence of security operatives at the scene of the clash was responsible for the high casualty in the area.
Residents of Iju Obawole, Station and Iju Ishaga had to keep vigil in order to ward off the rampaging miscreants who reportedly regrouped before they started attacking the estates in the area one after the other. Several houses and shops were looted.

Lagos State, Magistrate Courts, Igbosere
Hoodlums attacked Igbosere High Court, Obalende on Wednesday evening, which they set ablaze after stealing computers, printers, files, fans, air conditioners and other items.
In one of the videos circulated on Wednesday, hoodlums were seen running around with different items with one of them wearing a judge robe and wigs while carrying a machete on the other hand.

Lagos Oriental Hotel
Also attacked was a section of the Lekki branch of Oriental Hotel on Wednesday. Spokesman for the Western Metal Products Company (WEMPCO) Group, owners of the hotel, Taiwo Alli, confirmed the attack.
He said the facilities were attacked when hoodlums armed with guns, knives and bottles, forcefully gained entrance to the hotel, assaulted some of its security personnel and damaged property.

TVC
Hoodlums also attacked Television Continental (TVC) in Lagos despite the 24-hour curfew declared on Tuesday. Eye witnesses said the thugs besieged the entrance of TVC in the Ikosi-Ketu area of Lagos and the policemen stationed in the area took to their heels. The mob later set the station on fire.

The Nation Newspapers
The head office of Nation Newspapers at Matori, in the Mushin area of Lagos State also came under attack by suspected hoodlums. A statement by the Editor of the newspapers, Adeniyi Adesina said that the attackers arrived in a “commando-like manner,” and kicked their way into the premises brandishing sophisticated weapons.
“Some of the vehicles parked within the premises were set ablaze, others vandalised,” Mr Adesina said.
“Many boys came thereafter and swooped on the office, looting everything they could lay their hands on.
These include desktop computers, laptops, air conditioners and other office equipment.”