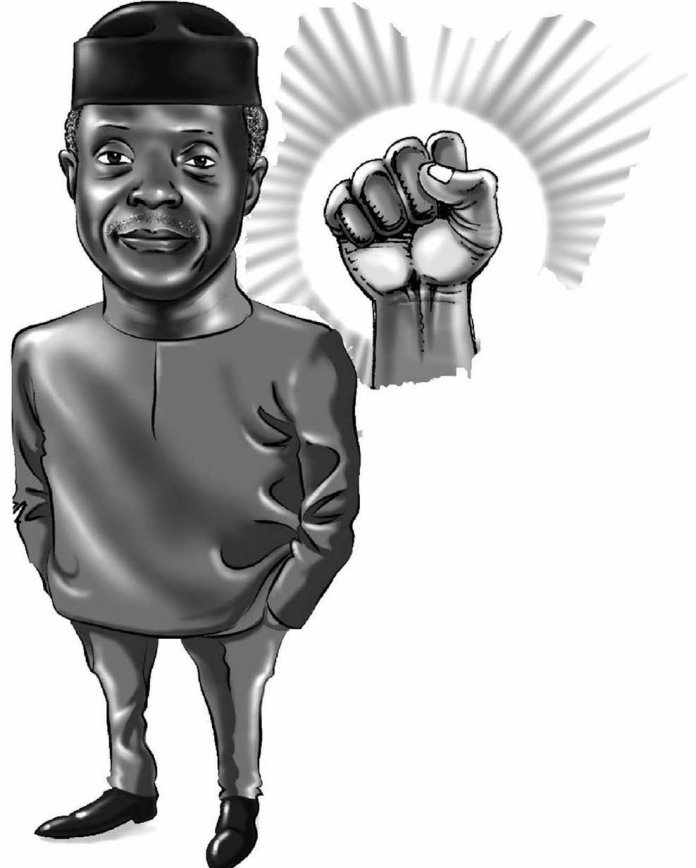 The Vice President is doing his bit to soothe the pains of Nigerians, writes Etim Etim

It is quite unfortunate and regrettable that the peaceful protests by young Nigerians have ended rather tragically in the shootings at Lekki toll points in Lagos last Tuesday night. What started as a campaign against police brutality by thousands of our young citizens across the country has ended in a painful calamity. The loss of lives at the Lekki Toll gate in Lagos and some other parts of the country would have been avoided had the protesters retreated after the federal government had responded by disbanding SARS and asking states to set up judicial inquiries into the atrocities of this police unit. The EndSARS campaign is undoubtedly a noble attempt by our young ones to raise their voice against police brutality, corruption, poverty and other ills plaguing our nation. But the infiltration of the campaign by hoodlums who burnt down police stations and private cars, invaded prisons and harassed innocent citizens was enough reason for the authorities to step in and stop the carnage. I believe that the authorities should have taken greater care to prevent the deaths of guiltless Nigerians. I am also aware that even after the government had responded, the young impressible protesters were egged on by some social media influencers (both foreign and Nigerian) who kept emphasizing the invincibility of Generations X and Y.

It is just as well that many political leaders have condemned the killings and destruction. Vice President Yemi Osinbajo posted his words of sympathies and condolences to those hurt in the violence. ‘’I spoke to some of those in hospital. The pain of these terrible events is palpable in our towns and cities, and some losses are irreplaceable, but we can and will get justice for all of them’’, he wrote. It is the second of such outpourings of grief in as many weeks by the VP.

Overall, the Buhari administration was swift to respond to the demands of the campaigners, and I must commend the Vice President in his untiring efforts in driving the federal government’s response to this crisis and the reforms of the police as a major law enforcement institution. First, it was the Vice President that summoned the Inspector-General of police on October 4 to his office after which the IG made the initial announcement of the ban on SARS. The following Friday, the VP took the IG to the President who then gave the authority that led to the outright dissolution of SARS on Sunday October 11. The creation of a new unit, SWAT, came a few days later. It is expected that the new unit will receive better training in dealing with the citizens.

Next, the VP used the National Economic Council, which he chairs, to further push and deepen the reforms. In its October 15 meeting and under the direction of the VP, NEC directed state governors to establish Judicial Panels of Inquiry to receive and investigate complaints of police brutality or related extra judicial killings with a view to delivering justice for all victims of SARS and other police units. The Council specifically resolved that state governors and FCT Minister should take charge of the interface and contacts with the protesters in their domain. So far, up to 13 states have established these panels. They are Lagos, Kaduna, Delta, Ekiti, Ogun, Anambra, Enugu, Imo, Plateau and Edo. Others are Nasarawa, Ondo and Akwa Ibom. In addition, NEC also agreed that each State Security Council will have Human Rights components, in addition to asking all states to set up a Victim Support Fund that will compensate victims of police brutality. The federal government, I understand, will also contribute to these funds. to mitigate further abuses, state governments will also set up Human Rights Complaints Office and very importantly, governors will now supervise any police tactical units in their states. These are some of the most comprehensive changes in our policing and human rights safeguards in this decade.

Soon after the NEC decision last week, the VP came out openly to apologize to Nigerians for their pain and frustrations over the atrocities of the police and the mass poverty and deprivations in the land. The VP also acknowledged that the administration had been too slow to act and largely taciturn in its engagement with Nigerians. ‘’We must take responsibility for protecting young people, even sometimes from those who are paid to protect them’’, Prof Osinbajo said last week. The tales of police brutality, wickedness and atrocities emerging in the aftermath of the protests are quite harrowing. I don’t believe that the police high command was unaware of all these. They must be held responsible and the offending officers should face their comeuppance in commensurate measure. The federal government should ensure that SWAT is a far better alternative to SARS.

Prof Osinbajo’s role in the government’s response to this crisis is not his first step on the nation’s turbulent firmament. Early on in the life of the administration, the president deployed him to the Niger Delta region when pipelines where exploding and oil output significantly declining. The VP toured every community and won the peace, and with that oil production level went north once again. When the President was away on a long medical leave in London in 2017, the VP stepped in and led creditably well. In all the situations, he has been trustworthy, truthful, humble and honest with Nigerians. There is no doubt that Yemi Osinbajo has been a loyal and trusted partner to President Buhari. He has commendably made up for the boss’ weaknesses.

In moments of personal tragedies faced by some families, Yemi Osinbajo would step out to visit and comfort. In 2016, he sent his wife, Dolapo, to the family of the late Assistant Pastor of Redeemed Christian Church of God, Abuja, Mrs Eunice Olawale, who was murdered while evangelizing. The 42-year-old mother of seven was killed by unknown assailants while she was preaching Gbazango West area of Kubwa. Last year, the VP himself visited the parents of an NYSC member, Precious Owolabi, who was killed during one of the Shi’ite uprisings in Abuja. Last March, the VP also went to a sleepy village on the outskirts of the nation’s capital to console the family of his police escort, Inspector Ali Gomina, who died on duty. In a moment of crisis, citizens expect to hear the comforting words of their leaders and see swift ameliorating interventions of their government. By stepping up and speaking to us when we hurt, and consoling the afflicted in their moment of anguish, the law professor continues to endear himself to us.