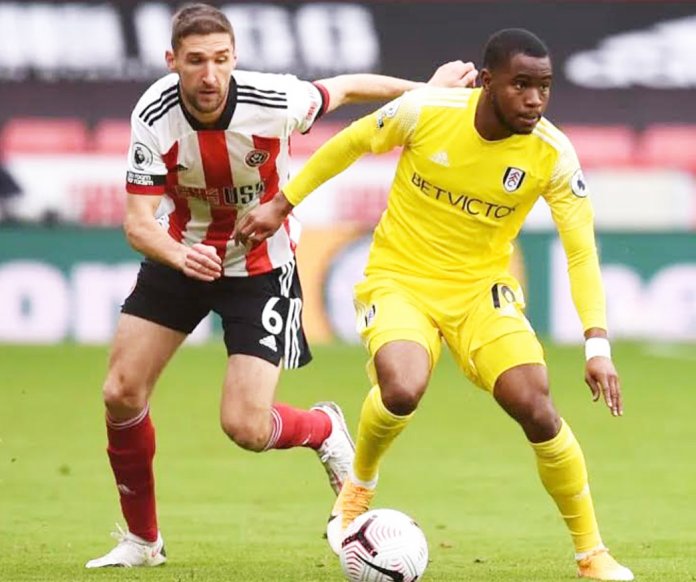 He opened his goal account for the Cottagers with a spectacular strike at Bramall Lane to end a three-year Premier League goal drought last weekend. With Fulham still lying deep in relegation waters, has Ademola Lookman found his scoring form to take the Cottagers out of the deep?

Ademola Lookman marked his first English Premier League start since 2018-19 with his first top-flight goal in three years as Fulham put their first points on the board at the weekend. Lookman has, at times in the past two seasons, appeared destined never to fulfill the promise he once displayed as a youngster.

During the first half of 2018, while on loan at RB Leipzig, the Nigerian had a hand in eight goals in 11 German Bundesliga outings, announcing himself as one of the most exciting young talents in the European football.

The years since have been fallow, however, as he failed to net in 21 Premier League appearances at Everton under Marco Silva, and wholly failed to ignite last term after being signed permanently by Leipzig

Zero goals or assists in 300 minutes of Bundesliga action across 11 appearances was all the club got for a hefty investment of £22.5 million

On loan at Fulham this season, and making his first start against Sheffield United on Sunday, Lookman served a reminder of his class, and at least offered a glimpse of why Leipzig were willing to part with such a significant sum to sign him permanently.

Picking the ball up inside a left-hand channel 13 minutes from fulltime, the wideman feinted to cut inside, lost his man with a change of direction, at one moment almost appearing to allow the chance to run away from him, then weaved through one defender and, advancing towards goal, slammed a left-footed effort into the roof of the net.

The goal was his first in the Premier League since January 2017, when he netted in Everton’s 4-0 rout of Pep Guardiola’s Manchester City and it served as a reminder that his talent is undimmed even though his career has lost momentum.

While it was a goal worthy of all three points, Fulham didn’t hold on to the win, although their point earned at Bramall Lane should offer some hope that they can beat the drop.

“I thought we should have got three points from the game, but it’s done now, so onto the next one,” Lookman told Fulham’s website.

“We all believe we can do great things this season. Obviously we’re a new group so we’re still gelling together, but that will come.”

Next up for Lookman and Fulham is a London derby against Crystal Palace.

The forward arrived at Craven Cottage on a season-long loan from Leipzig this summer and has been delivering impressive showings.

The 22-year-old was handed his first Premier League start for the Cottagers at Bramall Lane following his stand-out performance against Wolverhampton Wanderers last time out.

The Nigerian attacker made the most of the opportunity when he scored his first goal for the newly-promoted Premier League side against Sheffield.

Lookman put his side in front with a spectacular strike past goalkeeper Aaron Ramsdale in the 77th minute.

Lookman featured for the duration of the game along with Nigerian international Ola Aina, who is also another summer recruit and Tosin Adarabioyo.

The forward will hope to continue his impressive performances and help Fulham end their four-game winless run across all competitions when they take on Palace today.

Lookman switched his international allegiance from England to Nigeria, in spite of the 22-year-old forward, who was born in England to parents of Nigerian descent having played for the European country’s youth national teams.

Lookman helped England win the 2017 FIFA U-20 World Cup in the Korea Republic and was also part of the England team which won the 2017 Toulon U-20 Four Nations tournament in France.

In the penultimate summer, Lookman set a new Nigeria transfer record when he moved to RB Leipzig from Everton for a move worth up to £22.5m

German Bundesliga club, RB Leipzig broke the Nigerian transfer record for Lookman after Everton agreed to sell the winger for a fee said to be worth up to £22.5m.Born as Ademola Olajade Lookman October 20, 1997, in Wandsworth, London to Nigerian parents, he attended St. Thomas the Apostle College in Peckham where he achieved three As and five As at GCSE.

Lookman signed for Everton on January 5, 2017 for a fee of £7.5m rising to £11m on a four-and-a-half year contract and made his debut for the club 10 days later. He scored on his debut.