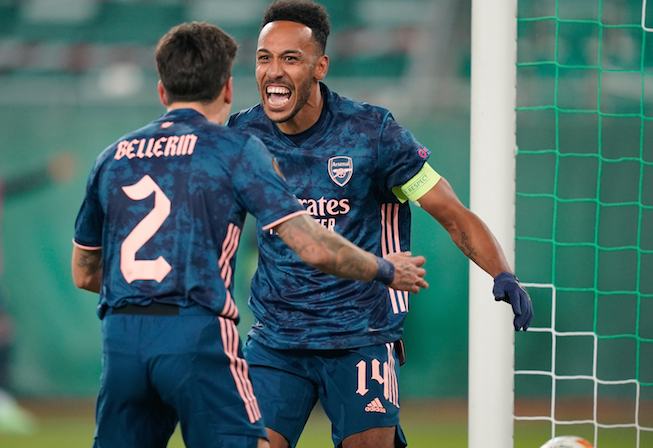 Substitute Pierre-Emerick Aubameyang scored the winner as Arsenal came from behind to win at Rapid Vienna in their Europa League Group B opener.

The hosts had taken the lead early in the second half when they capitalised on a Bernd Leno error, as the goalkeeper’s attempted pass was intercepted by Taxiarchis Founta, who then fired home from a tight angle.

Another error by Leno almost gifted the Austrians a second when he hit a clearance straight at Fountas but he was able to recover and parry the striker’s effort.

Arsenal, who gave a full debut to £45m summer signing Thomas Partey, lacked quality in the final third as they struggled to open up the hosts but found their bite when Aubameyang came off the bench.

David Luiz put Arsenal level when he headed in Nicolas Pepe’s free-kick and Aubameyang secured the win when he tapped in from Mohamed Elneny’s excellent assist.

Leno still looked nervous dealing with passes back to him and another poor clearance hit Luiz and deflected to Fountas, but this time Rapid Vienna’s top scorer could not capitalise.

But that was the only scare in the closing stages as Arsenal closed out the game to kick off their European campaign with an away win.