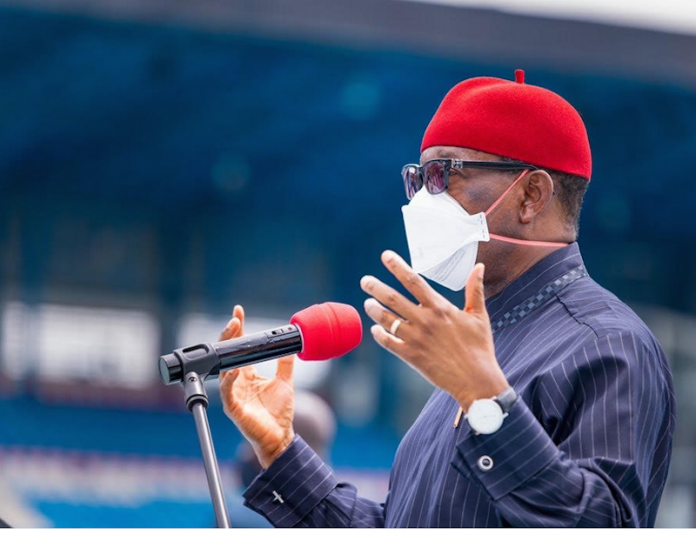 Many reasons have been adduced to explain how Delta recorded high success rate in containing Covid-19. Currently, Delta is among states that are flattening the curve with very impressive daily statistics, in some days recording zero cases.

Governor Ifeanyi Okowa, who qualified as a medical doctor at a record age of 22 years from the University of Ibadan in 1981, may have deployed his medical expertise and experience in the manner he marshalled his team to manage the pandemic.

First, he imposed a lockdown on the state even before there was a confirmed case. It was a masterstroke in medical proactiveness. Recall that as far back as December 31, 2019, a pneumonia of unknown cause, said to have been triggered by novel type of virus christened Coronavirus, was detected in Wuhan, in central China. It was subsequently reported to the World Health Organisation (WHO) Country Office in China. By January 30, 2020, WHO declared it a Public Health Emergency of International Concern. That was a red flag; warning the world to beware. But not many countries and communities heeded the warning as early as they should.

On February 27, 2020, the Federal Ministry of Health formally confirmed the first case in Nigeria. The index case was an Italian citizen who worked in Nigeria. He had travelled to Milan, Italy and returned to Nigeria via Lagos on the 25th of February 2020. He was confirmed by the Virology Laboratory of the Lagos University Teaching Hospital, part of the laboratory network of the Nigeria Centre for Disease Control, NCDC. That was the first pull at the trigger on Nigeria by the dreaded virus. Still, the nation did not make serious effort to dodge the bullet.

Strangely, when the first case was reported, the federal authorities still kept our international borders open. Fights in and out of Nigeria were allowed. Some governors paid no attention to the danger lurking in the horizon. Only a few states took heed. Instructively, Okowa was among the governors who took immediate steps to ward off the virus. He locked down the state before Delta ever recorded its first index case.

Delta has two airports in Asaba and Warri. The state also has four sea ports in Warri, Koko, Burutu and Sapele. Because of oil exploration activities and the strategic location of Asaba airport close to Onitsha international market, the state is a beehive. The entry ports witness a heavy traffic of outbound and inbound passengers. By air or by road, Delta is a major artery to the South East and parts of the South-South. This made it a potential hatchery and breeding ground for Covid-19. But this was not to be. Okowa moved fast, even faster than the federal government, to abort any likelihood of a mushrooming of the pandemic.

He established four well-equipped clinics for the treatment and management of the disease before there was any confirmed case. It’s noteworthy that while many states were stuck in the stasis of doubt and inadequate medical equipment, Delta had at least 20 ventilators, second only to Lagos, when there was not a single reported case in the state. It was a case of preparing a resting place in summer before winter sets in.

In modern medicine, emphasis is placed on preventive rather than curative medicare. Okowa applied this basic principle, rallying residents of the state to strictly adhere to the precautionary protocols of covid-19.

Again, in the fight against any contagion like the COVID-19, citizen mobilisation and enlightenment is key. Delta State realised this and set the machinery in motion to take the residents through a regime of enlightenment and awareness. The state also actively mobilised the private sector and other public spirited individuals to contribute to the fight against the pandemic.

This paid off especially with the Governor leading the fight from the front. He was directly in charge of the Task Force coordinating the fight. Okowa opted to directly head the Central Committee on Managing/Containing the COVID-19 Pandemic. The Governor heading this all-important committee was a fitting display of pragmatism in leadership. It made quick decision-making possible. It cut drastically all redundancies and down time. It bridged the gap between procurement of medical equipment and financing. Besides, when a leader leads from the front, it reinforces confidence in his lieutenants.

When the members of the committee noticed the devotion, passion and zeal of the governor, they could not but take their duty as a critical, time-sensitive and life-saving assignment with zero margin for error. Pronto, the governor reeled out precautionary measures and safety protocols that every resident of the state, except for persons on essential duties, must abide by.

They include: Closure of Asaba international Airport to traffic effective from Friday, March 27, 2020 for two weeks in the first instance.

Closure of all land borders into and out of Delta State from Sunday, March 29, 2020 for two weeks in the first instance.

Foodstuff sellers were directed to conduct their businesses within the precinct of their homes and were required to strictly adhere to the social distancing rules.

One efficient tool deployed by the Okowa government was sustained communication with the people. In crisis management, communication void of ambiguity and needless verbose is critical. Leadership must not only be seen to talk the talk, it must walk the talk. It must be do-as-I-do, meaning the leader must be exemplary enough as to become the mirror through which the people see through the veil of fear and confusion. Okowa turned himself to a mirror. He communicated hope. He wore his own mask publicly before asking others to do same. He did not plant fear in the hearts of the people. He communicated life to them, not death. He empathized with the afflicted. He was very sincere. Even when his family had to go into isolation, he came out openly to communicate with the people. He told them to be strong. He said COVID-19 is not a death sentence. That with strict adherence to medical advice and prescription, it’s surmountable.

In one moment of lifting the people’s spirit, he said: “I want to appeal to all of us to remain calm and vigilant. We must not panic. We can easily overcome this threat if we abide by the measures and all other information from the National Centre for Disease Control (NCDC).

“We will easily defeat the spread of this disease if everyone sees himself/herself as a victim who does not want the virus to spread. To adopt a superstitious approach as many of us do that ‘it is not my portion’ could prove to be fatal. This is no time for self-medication. If you notice at any point in time that your temperature is above 37.9 Celsius, do not hesitate to call on the relevant authorities/ or visit the nearest hospital.”

Because public enlightenment on the COVID-19 was effective, it was not difficult for Deltans to buy into the initiatives of the Okowa-led committee. The duty of containment of the contagion thus transcended from the committee to the residents; a matter of shared responsibilities and values. This rationally explains why despite the growing cosmopolitan status of the state, it recorded a low quotient in coronavirus infection.

As at October 14, 2020, Delta had recorded 1,810 cases of coronavirus. A careful study of the national chart provided by the NCDC showed that other less commercially vibrant states and even far less cosmopolitan states had more cases of the virus than Delta.

Besides, recent statistics from NCDC showed that Delta is flattening the curve faster than many states. On some days, not a single case is reported. Add to that is the fact that Delta also recorded one of the highest number of discharged cases by percentage of recorded cases. Doctors at the isolation centres attributed this to provision of adequate medical equipment by the state government and motivation of medical and other field personnel by the government.

Overall, just like she did with Ebola, Nigeria did not fare badly in the management of the covid-19 pandemic. She could still have done better but so far, she has bettered the efforts of far more advanced nations of the world including United States, Brazil, Russia, United Kingdom and even China, the suspected birthplace of coronavirus. In Africa, Nigeria has a better covid-19 management profile than less populous nations like Egypt and Ethiopia. This impressive performance is down to the sacrifices, foresight and vision displayed by pockets of leaders across the nation, one of whom is Governor Ifeanyi Okowa.

• Ugbechie wrote in from Warri