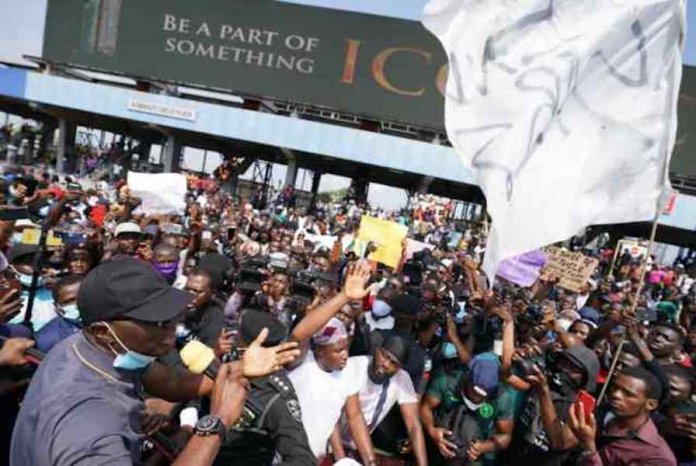 The answer to the protest does not lie in sending the military to the street, writes Ken Nwachukwu

Unless one is taking refuge at home, very few in major towns of Nigeria can claim not to have been affected by the ongoing #END SARS agitation by Nigerian youth. Young men and women of all ages have for one week seized major arteries of cities to protest the high handedness if not outright brutality of the Nigeria Police Force. This has forced many off the roads to either stay safe or save their property. The EndSars protest is a youth-led protest against the Special Anti-Robbery Squad of the Nigeria Police.

Accounts of the police accosting young adults in the streets and forcing them to unlock their phones or laptops on suspicion of criminal dealings abound everywhere. Many of these youth have been molested, abused or simply dehumanized by the police. Those caught with money have been forced in some cases at gun point by the police to part with heavy sums as ransom. Or have been taken willy-nilly by the police to the ATM to withdraw money to reprieve themselves. Yet a few unfortunate ones have paid with their lives such as the case of ex -Youth Corper, Ifeoma Abugu, who was seized in place of her fiancé and died in police custody under mysterious circumstances.

The week’s long protest by the youth has coalesced all manner of agitators, anarchists and sundry troublemakers. Their battle cry has become a lightning rod for venting on all the perceived ills of the society: police brutality, bad governance, corruption, among others. The youth have come up with their five-point demands which include: dissolution of the SARS, holding perpetrators to account, compensation to victims of police brutality, etc.

There is no gainsaying that the protest is gaining traction. It has received a ringing endorsement from the children of the first and second families as with other important personalities in the country. Kiki Osinbajo, daughter of the Vice President tweeted #endpolicebrutality and #endsars. Her youthful counterpart Zahra Buhari, daughter of President Muhammadu Buhari tweeted #EndPoliceBrutality. Many celebrities and legions of wannabe important actors have followed the train of hashtag EndSARS. Not to be left out, some Yuppie preachers have registered their presence at these protests, thereby giving more gravitas to the protest.

In response to these agitations, Mohammed Adamu, the IGP has caved in on the demands by the youth and dissolved the SARS. He has also promised to bring to account, police officers found complicit in the brutality of the police. It is a move that has received presidential endorsement.

But mobile policing has always been part of Nigeria’s security architecture. The reason is understandable. Policing per capita in Nigeria is one leanest in the world. Nigeria has less than 400,000 police personnel securing a population of almost 200 million Nigerian. Of this number, a sizeable proportion is employed on non-police duties, which sometimes involve rendering menial responsibilities to high ups in the polity.

In essence, SARS or mobile policing has served at once to cobble the manpower gap in the force and to deter armed robbery and other social ills through presence. Before now, it was the Police Mobile Unit that had that honour of providing mobile policing. The Mobile Police or MOPOL, like its successor units was not fancied for its people-friendly disposition. The force was so brutal that it was dubbed ’Kill and go.’ This was a sobriquet earned because of its impunity and non-accountability.

Since then mobile policing has been chaperoned through some cosmetic changes—changes in name but not style. The name has oscillated along a wide spectrum of nomenclatures ranging from ‘Operation Flush’ to ‘Operation Checkmate.’ Each police command was permitted to elect a frightening appellation according to its fancy. The actual nomenclature of the immediate past mobile policing outfit was FSARS and not SARS. Mr Adamu, current Inspector-General of Police simply prefixed the ‘F’ to the previous outfit, perhaps to distinguish it from the previous notorious body. And in the wake of the current uprising, quickly dumped the name and opted for SWAT—Special Weapons and Tactics group.

One however begins to cringe at the lack of originality in the Police Force. Is the problem with name of mobile policing unit or the tactics? Shouldn’t the police think more of rejigging its doctrines and methods and not just names? There is no reason why anyone can be arrested in front of their house for ‘wandering’ without being allowed to prove his bonafides. Or face a binary choice of being force-marched to the station or the ATM to prove that he is not guilty as charged. The name SWAT is another problem. SWAT is the same name as the American Police flick of 1970s. The copycat name is troubling. It gives the impression that Nigeria is not capable of fashioning out an authentic name to depict its concept of mobile policing. SWAT also means to crush. What then is the actual intention of the police establishment? If SARS has not done enough damage to the people already, is it to crush them that is preferable?

There is also a concerning discordance in the approach to handling this protest. While some governors such as Simon Lalong of Plateau State and his Borno State counterpart, Babagana Zulum have been less than supportive to the protest, a handful of others have openly fawned at the protesters. Governors Babajide Sanwo-Olu of Lagos State, Godwin Obaseki of Edo State and Nyesom Wike have mounted the rostrum to identify with the protesters. Governor Abudulrahman Abudulrazaq of Kwara State and Adegboyega Oyetola joined the crowd to protest police brutality as though they were not the chief security officers of their states.

The strike itself has assumed an alarming proportion. From a youth-based protest, the demographics have escalated. You now have mothers, grandmothers and fathers joining in the protest. The original revendication has also evolved from five points to 23 points if this anecdotal report on that evolution is to be believed. In the midst of all these the police have continued to behave true to type. On October 12, the Police wantonly opened fire on protesters in Surulere, killing one Iloamauzor. This action by the police should train new scrutiny into the psyche of our police. Is it that they are tone deaf or just do not understand the gravity of the moment?

As troubling as the protest have been, some good have come out of it. The protests have put a lie to the claim that the biggest challenge to the national unity is ethnicity. Youth from all walks of life and across ethnic divides have spoken with one voice to denounce police brutality. It was a spectacle watching some Muslims observe the Jumat service on Friday 16, at Lekki toll gate, while other protesters kept watch. Men and women, boys and girls moved freely and were united by a common purpose. Food was made available, just as free charging ports were provided. No one spoke of robbery. Those who suffered losses were easily provided succour by fellow protesters.

For some arcane reasons the protest has so enlarged that few will recognize the proximate cause for the youth taking to the streets. The mindless trigger-happy approach to law and order was the main reason for this flash of emotions. The youth or rather the people have spoken. It is now the time for government to aggregate these demands and come up with solutions. The answer does not lie in sending in the military as some have clamoured. There is always no facile way to handing public upheaval. But sensitivity has proven to always be a winner. Government should come up with answers – immediate and long term. For the rioters, the point has been made. The police may not always be your friend, but they are a necessary evil. It is now to go home. Continued protests will further undermine the economy that has been hobbled by the five-month coronavirus lockdown. Let reason prevail.