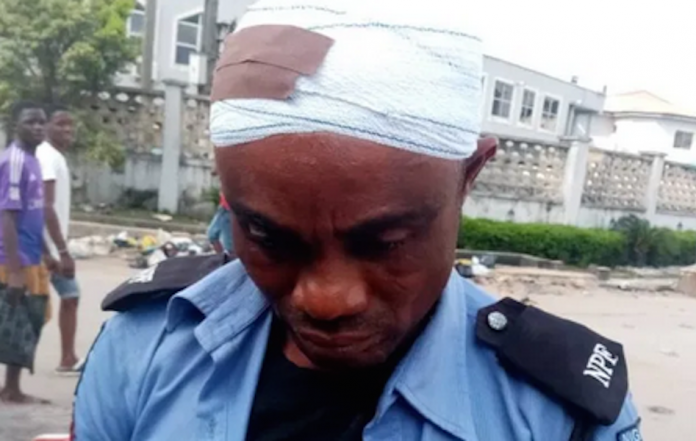 No fewer than 20 policemen have sustained varying degrees of injury as the hitherto peaceful protests in Lagos seem to be degenrating into chaos with the recent wave of anti-police sentiment on the rise.

With the infiltration of the protest by hoodlums, several incidents were recorded of policemen being attacked as they went about their lawful duties.

The policemen who were given strict directives by the Lagos Commissioner of Police, Hakeem Odumosu, not to engage protesters, fled for their lives.

Armed with stones, one of the videos made available to THISDAY showed the operatives in a Rapid Response Squad (RRS) truck being attacked by some hoodlums.

The attack occurred at Ebute Meta while the operatives were being moved to relieve their colleagues who had been on duty since Sunday.

Armed with sticks and bottles, the thugs in their hundreds barricaded the RRS truck, pelting the operatives with stones.
Attempts by the driver of the police truck to reverse proved abortive as other cars behind him left little room to manoeuver.

With the hoodlums quickly approaching as they hauled stones at the policemen, the driver jumped down and fled alongside other operatives at the back of the truck.

At the last count, about 14 operatives of the RRS were injured in the attack as the hoodlums brutalised the policemen.

Already, some of the injured have been moved to the Police Clinic Ikeja and others have been taken to the General Hospital for medical attention.

In another video, some hoodlums were seen chasing an RRS pick-up van around Lagos-Ibadan expressway, at Secretariat end, but the driver managed to escape the onslaught.

Also, another set of hoodlums attacked RRS operatives at LASU on Monday morning, forcing their vehicle to detour.

Condemning the attacks on policemen, the state Police Spokesman, Olumuyiwa Adejobi, said some of the protesters exhibited violent traits and disdain for the police, urging them to desist from the needless provocation of operatives.

He lamented that many policemen had been injured in Adekunle area of Yaba, adding that many of those protesting were too aggressive and do not want to see the police around them.