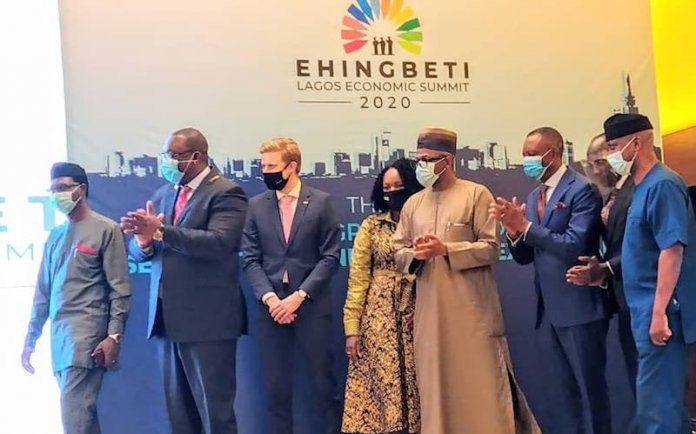 The outbreak of the COVID-19 has profoundly changed the world. From being a health crisis which has claimed the lives of over one million persons globally, the economic damages caused by the virus which emanated from Wuhan, China, has been unprecedented.

Indeed, the Nigerian economy is currently in dire straits with major economic indicators looking grim due to increasing external shocks as a result of the virus. The pandemic as well as the drop in crude oil prices, the country’s major source of revenue, indeed exposed Nigeria’s weak underbelly.

For Lagos State, despite the fact that the lockdown that was occasioned by the virus affected socio-economic activities, the state government has remain focused on its promise to transform the state.

For instance, despite the challenges posed by the virus, the internally generated revenue (IGR) of Lagos state grew to about N212.5 billion in the first seven months of 2020. Thus, as economies around the world begin to implement recovery strategies from the shockwave of the virus, the Lagos Economic Summit Group (LESG) is charting the path for the sustainable socio-economic development of the state at the Lagos Economic Summit tagged ‘Ehingbeti 2020’ scheduled to hold from November 10th to 12th, 2020.

With the theme, ‘For a Greater Lagos: Setting the Tone for the Next Decade,’ Ehingbeti 2020 will provide a platform for deliberations on pragmatic optimisation of the inherent opportunities in Africa’s fifth largest economy and offer perspectives on how to manage the peculiar socio-economic landscape of the state in the coming decade.

Acknowledged as the first institutionalised economic forum by any state in Nigeria, Ehingbeti is a public-private sector roundtable that started as a collaborative effort between the Lagos State Government and Business Club Ikeja.

Since the inaugural summit in 2000, the summit has gained useful insights from innumerable business and political leaders, private sector players, renowned economists, notable development experts and outstanding scholars, who have participated from various parts of the world.

Ehingbeti is an ingenuous socio-economic apparatus that has contributed significantly to the evolution of Lagos State into a major economy in sub-Saharan Africa and an admirable megacity, with expanding potentialities. The summit, hosted by successive administrations in Lagos State since the beginning of the 4th Republic, has consistently redefined the dynamics of public-private sector collaboration for development across social and economic indices in Lagos State.

The three-day summit, which would be a hybrid of virtual and live events, would draw participation from various sectors of the economy and across the globe.
With the absence of the economic summit in the past four years, there seemed to be a decline in the rate of public-private collaboration in the state.

According to the state government, this year’s summit is aimed at reconnecting with the private sector, which is the bedrock of the Lagos Economic Summit, adding that the quest to strengthen existing relationship between government and the private sector is one of the major goals of the summit since greater private sector participation in governance remains a prerequisite for a functional state.

The state has also refreshed the Ehingbeti logo to reflect the contemporary outlook of the annual summit without disconnecting from the economic heritage of the Marina and Broad Streets areas of Lagos, which served as the springboard for Nigerian and West African economic development since the European incursion in the 15th century.

Unveiling the new logo recently, the Co-Chair of the ‘Ehingbeti 2020’ Steering Committee and former Lagos State Commissioner for Economic Planning & Budget, Mr. Olayemi Cardoso said: “this new Ehingbeti logo is an embodiment of meanings and expression of the LESG ideals.

The convergence of colours in the logo connotes the essence of Ehingbeti as a participatory forum for integrating local and international stakeholders to exchange ideas and chart a path for the socio-economic development of Lagos State
“The bright star above the image of the iconic ‘Agba Meta’ is a depiction of the result of working together to deliver the stellar accomplishments that define the city state of Lagos and the pervasive atmosphere of economic stability in the State.

“I am happy to let you know that the image of the ‘Agba Meta’ is a representation of the sculpted white cap chiefs built to welcome people into Lagos. The logo is to emphasise our pride in culture as we welcome participants to Ehingbeti 2002 and beyond.”
Cardoso, who is also the Chairman Citibank Nigeria, noted that the state continually outshines its peers in the country because of its continuous dialogue and collaboration with the private sector.

Cardoso said: “It is timely that this happening and I say that because Covid-19 and its aftermath has wreaked havoc in economies around the world and we are no exception to that and when it going to end nobody knows.
“All we know is that countries around the world, pay dearly from being on lockdown and for any lockdown, you have a corresponding loss in Gross Domestic Product.

“With the challenges ahead and Lagos being the economic nerve center of the country, there is a large responsibility to ensure that they protect the citizens of the state and this is something that can’t happen unless it is planned for.”
On his part, the Commissioner for Economic Planning and Budget, who is also a Co-chair of the Steering Committee, Sam Egube, pointed out that in the last two decades, Ehingbeti has played a pivotal role in the transformation of Lagos State, with useful inputs into Lagos State Development Plans (LSDP).

“Our realities from 2000 when the first Ehingbeti held, exactly 20 years ago, have significantly changed. As a state, we now have to cater for the infrastructural needs of more than 22 million population and ensure that Lagos remains on the path of continuous growth.

“These considerations are the groundwork of the Babajide Sanwo-Olu administration’s THEMES Agenda, but translating the agenda to benefits for our people will require collaboration amongst stakeholders, and a determination to deepen the foundation for sustainable development and growth of our society. So, Ehingbeti 2020 offers us a platform to address all these,” Egube added.
Furthermore, he pointed out that the summit has a rich history and is firmly established as a credible forum for stimulating economic growth for Lagos state.

You cannot lead a place like Lagos with one mind, you have to bring together all the minds, he stressed.
“The first three editions were deliberately diagnostic, but by the fourth one, we had started to create a blueprint and we have started to implement it from the early decisions that had been made. So far about 119 resolutions were taken in the history of Ehingbeti, 109 of them have been implemented,: he said.

According to the Lagos Commissioner, the good thing about the summit is that the government is responsible for the decisions taken and is obliged to report back to the next Ehingbeti what it has done with the decisions that were taken at the previous one.
“To some it appears the ambitions are too high, because how do you put private sector in the lead and collaborate in that manner. They have wondered whether government can be trusted to follow through with this idea of collaboration, but the performance shows that yes, we follow through,” he stressed.

Speaking about the impact of the summit, Egube pointed out that the whole idea about the blue line, the red line, the rail master plan were initiatives that were conceived during past editions of the summit.
“Today we see the rail line is on its way those are big projects that sometimes it is difficult to take such decisions on your own but when the private sector comes together and say let’s do this, it increases confidence in taking such leap. I can tell you that we are on our way to deliver the red and blue line,” he added.

He further added that the entire Lekki-Ikoyi toll bridge project came out of Ehingbeti discussion.
“The fact that we are trying to expand our activities on the waterways is also Ehingbeti. Lagos homes ownership scheme rent to build scheme, all of these came out of Ehingbeti,” he added.

The Lagos State Government recently assured residents of its commitment to fulfilling all its promises, in spite of disruption occasioned by the COVID-19 pandemic and other challenges not envisaged.
The Governor, Babajide Sanwo-Olu, said fulfilling the promises was in line with the T.H.E.M.E.S development agenda for ‘Greater Lagos’.

He said that in spite of reduction in the budget as a result of the COVID-19 pandemic, the government would fulfil its promises.
According to him, the state government is determined to step up the tempo of governance through innovative and inclusive policies.
“I want to assure you that despite disruption occasioned by COVID-19 and other challenges that we did not envisage, we are still committed as a government to fulfilling the promises we made to people, knowing fully that no excuse will be tenable to our citizens.

“We must be determined to step forward, heighten the tempo of governance and continue to create opportunities through innovative policies that are not only inclusive but provide sustainable solutions for this present administration and lay foundation for future administrations coming behind us,” he said.

Sanwo-Olu implored public office holders to be committed to the administration’s effort to meeting the yearnings and aspirations of Lagosians.
In all, the expectation is that the economic summit would bring together experts, both in private and public sector, to design policies that would enable the state government achieve its goal of creating a greater Lagos.