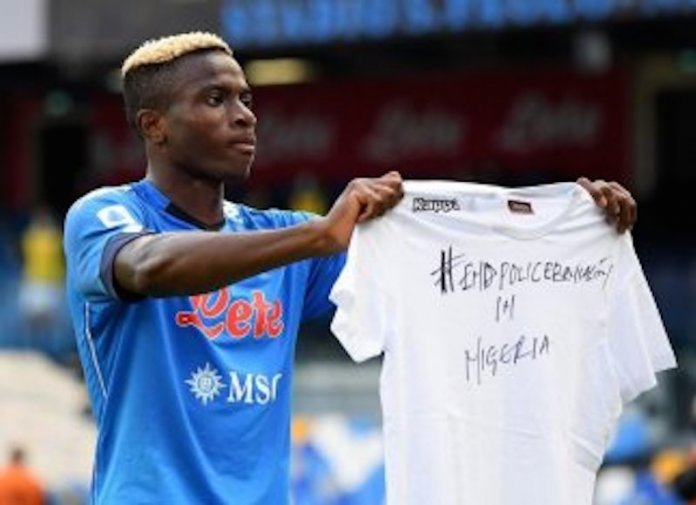 Nigeian strikers, Victor Osimhen and Simy Nwankwo have joined thousands of compatriots in calling for an end to police brutality in the country.

Osimhen who scored his maiden goal in Serie A in Napoli’s 4-1 defeat of Atalanta on Saturday held up #EndPoliceBrutality shirt along side his compatriot Nwankwo who scored Crotone’s 1-1 equalising goal against Juventus yesterday night.

. Osimhen sealed the hosts’ 4-1 victory over Atalanta at the Stadio Sao Paolo with a 43rd-minute strike.
Napoli had a perfect start to the encounter thanks to Mexico star Hirving Lozano’s four-minute brace, in the 23rd and 27th minutes, while Matteo Politano made it 3-0 in the 30th minute.

Osimhen then connected with goalkeeper David Ospina’s long ball to break his duck in the Italian top-flight, just two minutes before the break.
He celebrated the goal in style as he joined other Nigerians in demanding an end to police brutality in his home country.

Over the past week, Nigerians have trooped out in numbers in protest against a unit of the Nigeria Police Force alleged with extrajudicial killings of civilians, and global football stars, including Manchester United’s Marcus Rashford, and Arsenal’s Mesut Ozil have shown their solidarity.
Since the start of the season, Osimhen has now contributed a goal and an assist in three league matches for the Partenopei.

Senegal centre-back Kalidou Koulibaly played from start to finish for Napoli while Algeria left-back Faouzi Ghoulam replaced Politano in the 61st minute for his second appearance of the season.

During the week they were punished by the league authorities for not honouring their last Serie A match against Juventus at the Allianz Stadium and the Serie A champions were handed a 3-0 win, with Napoli additionally docked a point for the no-show.

Osimhen will be looking to help Napoli build on this latest win when they host AZ Alkmaar for their opening UEFA Europa League match on Thursday, before they travel to Benevento for their next league fixture on October 25.