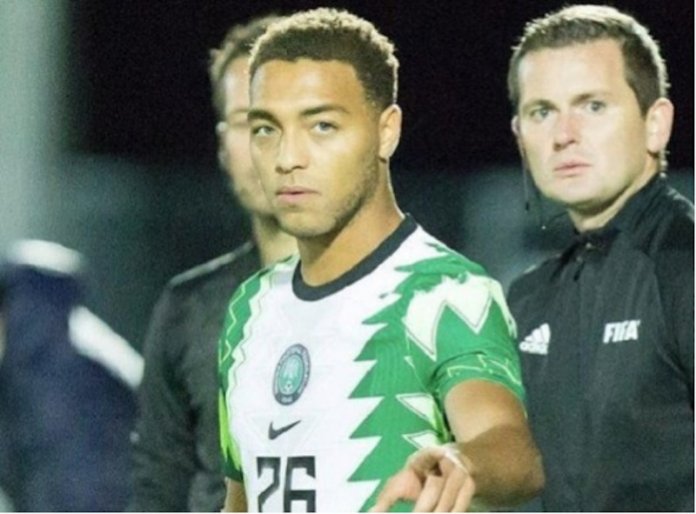 He had waited impatiently for his Super Eagles derby since his decision to dump his country of birth- Belgium for motherland. His wait was further stretched with the postponement of Nigeria’s Africa Cup of Nations qualifier matches owing to Coronavirus pandemic. The wait however ended when he came in as a 72nd-minute substitute in the international friendly game against Tunisia in Austria. Though, he played for only

18 minutes, for Cyriel Dessers, the moment remains nostalgic
Cyriel Dessers had been hoping to achieve one of his life goals of playing for the Super Eagles.
He was in line to make his debut for the three-time African champions in an Africa Cup of Nations qualifier game against Sierra Leone in March but the game was postponed due to the Coronavirus pandemic.

Dessers had stated before now that it would be “incredibly amazing” to play for Nigeria and hopes his form will earn him a call-up.
The 25-year-old, born to a Belgian father and Nigerian mother, is eligible to play for the Super Eagles, given he is yet to feature for the Dutch senior team.

“There’s been communication with Nigeria football authority but I’ve got to keep playing as well as I can for Heracles, and hopefully that will happen soon,” he told BBC Sport.
“I know it’s a strong ambition of mine, but sometimes you need to stay focused and not get distracted as a professional footballer.

“Everyone in the family is hoping – and to be involved with Nigeria would be incredibly amazing for my career, but I’ve got to keep proving myself first.
“To get a chance to stand at the door is a step forward. You start every day hoping for success at club level. If you keep working hard, hopefully, you make some life goals come true.”

His dream of staring for Nigeria finally came to fruition following his international bow against the Carthage Eagles, and the 25-year-old has expressed his delight representing the three-time African champions.
Dessers was ecstatic to get his first international debut for Nigeria in Tuesday’s 1-1 draw against Tunisia.

He was an unused substitute against Algeria, notwithstanding, he made his bow against the Carthage Eagles after replacing Ahmed Musa with 18 minutes left to play at the Jacques Lemans Arena.
“Proud and honoured to represent a big football nation like Nigeria. Proud to be a Super Eagle,” he tweeted.

I am tired, I barely slept last night and still have to go home by car, but it was worth it”, Dessers told Het Laatste Nieuws.
“It was fun, I was very well received in the group.
“This was a highlight in my career, yes.
“There are not many things that are highly regarded, right? Maybe become a top scorer, yes. But playing for your country.”

Dessers said he was now looking forward to his next game for the three-time African champions.
“Who wouldn’t want to be there again?” He asked rhetorically.
“You never know in football. But then I will have to play well at Genk in the first place. That’s my main concern now. Making more minutes at Genk now requires my full focus.”

While at Heracles Almelo, Dessers had expressed his wish to represent the 2013 African champions after meeting with officials of the Nigeria Football Federation.
He was invited for the first time earlier this year by Coach Gernot Rohr for Africa Cup of Nations qualification with Sierra Leone – an encounter that could not take place owing to the outbreak of COVID-19 which crippled football-related activities across the globe.

“It hurts me because I thought it was going to be one of the best moments of my life – or at least my career – and that it didn’t go through was really painful,” Dessers told BBC Sport.
“I know it’s a young team, a lot of players playing in Europe, so I think that the adaptation would be fine and I hope when I come into the team they accept me.

“I am looking forward to seeing Victor Osimhen, I like to watch a lot of football and watch the strikers and I think he is a great striker, and I hope I can help him and support him.”
After impressing in the Eredivisie, where he scored 18 goals and provided six assists to emerge as joint-top scorer in the Dutch elite division, Dessers penned a four-year deal with Belgian top-flight side Genk.

At the Luminus Arena this season, he has scored two goals in six league appearances for Jess Thorup’s men.