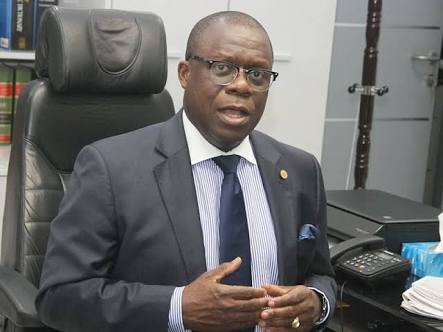 Former Attorney-General and Commissioner of Lagos State, Adeniji Kazeem, SAN, at a media parley with some Judicial Editors last week, drew the attention of the Government and stakeholders to the plight of Nigerian judicial officers, while commenting of Nigeria at 60.

He said “the Nigerian Judiciary has grown in leaps and bounds in the last 60 years. From the great jurists who served in the Supreme Court and lower Courts in years past, till present. These noblemen and legal giants helped create the necessary platform for social engineering, which has greatly assisted in giving ordinary Nigerians greater access to justice.

“Only recently, the Supreme Court made a landmark pronouncement that quelled the controversial issue of virtual hearings and access to justice that had arisen, in the course of the recent global public health crisis.

“One must also concede that, over the years, there has been massive infrastructural improvements with building of new courts, creation of new judicial divisions and appointment of more judicial officers and staff. However, I must be frank that there has not been a commensurate improvement in the welfare of the Judiciary, both for serving and retired officers. If you take a comparative survey of the perquisites of office for the judicial sector, compared to the executive and legislative arms, you will find that there is a huge gap. This gap has led to low motivation, and sadly but inevitably, cases of corruption in that sector. The quality of life of several of these judicial officers
especially retired ones, many of whom are corruption free, continues to diminish daily.

To make matters worse, the Judiciary has slowly become a public whipping boy, that is, largely overworked and over-vilified, supported by sometimes decrepit and outdated tools.

“At 60, Nigeria has, and continues to produce fine jurists and judicial workers, but there must be a massive overhaul of its remuneration across board. There must also be a more transparent selection process devoid of bias and prejudice, so that we can have the finest upright minds to dispense justice without fear or favour.

“There must be more infrastructural development, in order to provide for better administration of justice. For instance, the number of court rooms and inevitably judicial officers manning both courts of first instance and appellate courts must be considerably increased, especially in places like Lagos and other major cities to enhance quality of justice and timing of delivery. This will largely reduce the period in between adjournments and workload of the Honourable Justices. As you know, justice delayed is justice denied.

“In summary, I would say that notwithstanding the challenges, the Judiciary has made remarkable progress in many ways over the last 60 years, and has lived up to its reputation as a just and fearless last defender of the common man. However, we must be truthful that it’s sterling reputation at independence in 1960 has been considerably whittled down by so many factors, including bouts of military dictatorship such that an unwholesome halo has unjustly begun to hover over both the good and bad eggs in its midst.

“Nonetheless, I remain a perennial optimist and believe the best is yet to come for the Nigerian judiciary, and with the right policies and improved attention to the welfare of both serving and retired judicial officers, it’s pride of place as contemplated 60 years ago can be restored for the benefit of Nigeria and Nigerians.”