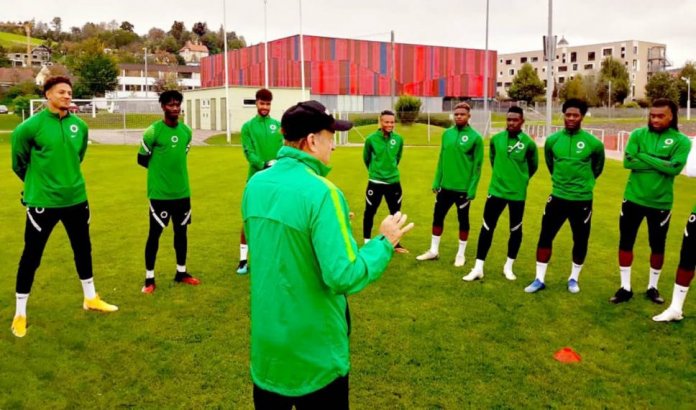 After Super Eagles 0-1 defeat last Friday by African champions Algeria, Coach Gernot Rohr has told his players they need to step up their game to get a win against Tunisia this evening in the international friendly at the Jacques Lemans Arena in the Austrian city of St. Veit an der Glan.

That lone goal loss to Algeria caused a buzz in football circle in Nigeria’, with most pundits and fans arguing that the bunch of new players tried out by the Franco-German coach failed to live up to the standard the senior national team has created.

Now, Rohr has sounded it loud and clear that to make Nigerians happy this evening, Super Eagles must come out smoking to emerge the better team in the clash of Eagles. The Tunisian are known by the sobriquet Carthage Eagles.

The Super Eagles tactician admitted that the absence of a number of first-team honchos somewhat weakened the texture of his band, but has challenged the squad to up the ante and show vibrancy especially in the fore against the 2004 African champions.

“We definitely must put up a greater effort against the Tunisians. It is an opportunity for some of the players to rise up to the occasion, stake a claim. They are ready to go and I believe we would see a much better game on Tuesday,” Rohr pledged.

In their absence, Rohr had to start first-cap Frank Onyeka along Alex Iwobi and defender Oluwasemilogo Ajayi in midfield, and Paul Onuachu as the lone striker.

In a match that also saw wing back Zaidu Sanusi, centre-back Kevin Akpoguna and midfielder Samson Tijani also earn their first senior caps, the Eagles huffed and puffed and strove hard to find cohesion and some sort of solidity, but failed to match the mentality and organization of the Fennecs.

Tonight, the three-time African champions come across the same team they defeated to clinch bronze medal at last year’s AFCON finals in Egypt, and have no illusions they must be at their best against a motivated Carthage Eagles who thumped Sudan 3-0 in Tunis on Friday.

All 26 Super Eagles in camp were involved in Monday evening’s training session, and are available for selection.

Goalkeepers Dele Alampasu and Matthew Yakubu, defenders Kenneth Omeruo, Chidozie Awaziem, Olaoluwa Aina and Jamilu Collins and forwards Cyril Dessers and Chidera Ejuke were not part of the run-out with Algeria and could be considered for action this night.

Tunisia have not beaten Nigeria in a competitive game since the 2004 AFCON that they hosted, when they edged the Super Eagles on penalty shoot-out after both teams tied 1-1 in regulation and extra time at the Stade Olympique in Rades, outside Tunis.

Matches between Nigeria and Tunisia have always been supercharged, the 2004 encounter no less so. After Austin Jay Jay Okocha gave Nigeria the lead from the spot, Tunisia restored parity with only eight minutes left, Khaled Badra also poking in from the spot. Osaze Odemwingie missed during the shoot-out and the Eagles had to be content with the bronze medals after beating Mali. Tunisia went on to defeat Morocco in the final for their only continental title so far.

Meanwhile, all the Nigerian players and coaches went through a fresh round of Covid-19 tests conducted yesterday.

Last Friday, the entire Nigerian contingent of players and officials returned Covid-19 negative results after tests conducted on Thursday in Klagenfurt, venue of the clash with Algeria.